Today is June 11. We were originally shooting to leave by June 18 to run the Taylor Mountain 50k in Issaquah, Washington on June 20. That means we would have had exactly 7 left to get this thing done. Unfortunately (in so many ways), we aren’t going to be able to make this date and are shooting to leave on the following Wednesday, June 24, instead. We are bummed that we aren’t going to make the race and our original launch date, but we know that having an extra weekend to finish the final details and clean things up here at the Hitchcock’s will get our year on the road off to a good start.

A few months ago Will and I were feeling overwhelmed by the bus project and started joking about how nice it would be to be on a show like Extreme Home Makeover or Tiny House Nation that would bring in a bunch of people to help get everything finished. We haven’t secured a TV deal (yet!) but we have been enjoying the help of many of our friends and family over the past few weeks.

This last weekend we had help from our college friends Tommy, Jono, and Joe; Will’s parents Rob and Danise, and Will’s brother Spencer. Having people out helping us with the bus is great for productivity in so many ways. Obviously, extra hands means getting more stuff done faster, which is a great thing. The real benefit, though, is the extra faces. Having friends and family on the bus, getting ideas, helping us work through problems, and keeping the mood light is such an amazing motivator. We feel so lucky to have this many people in our lives willing to give up their free time to help us get this bus done. 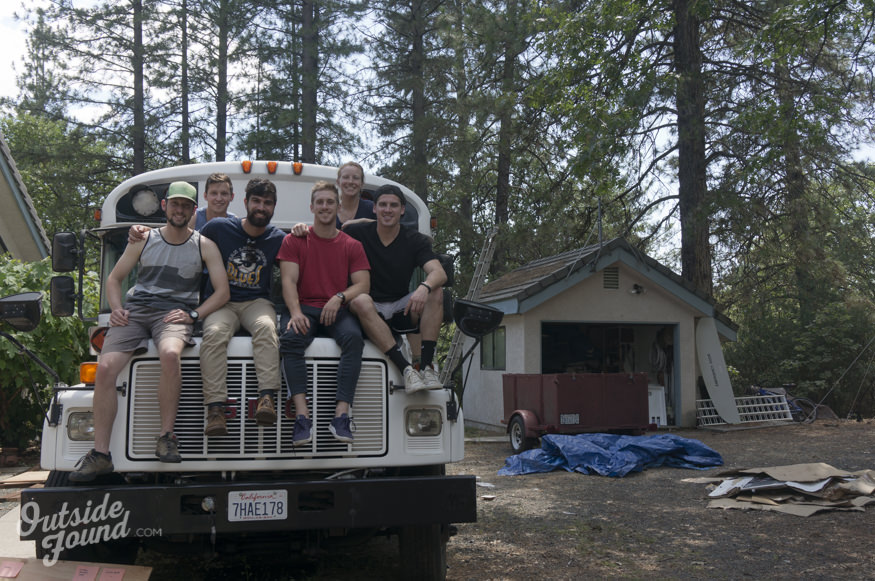 We were able to get a ton done this weekend with all of our extra help! In no particular order…

We had been putting the heater off for quite a while but finally got it done late last week, before we built the bed. Getting the hoses to connect to the body of the heater was tough but we were able to figure everything out and get it secured in a few hours. 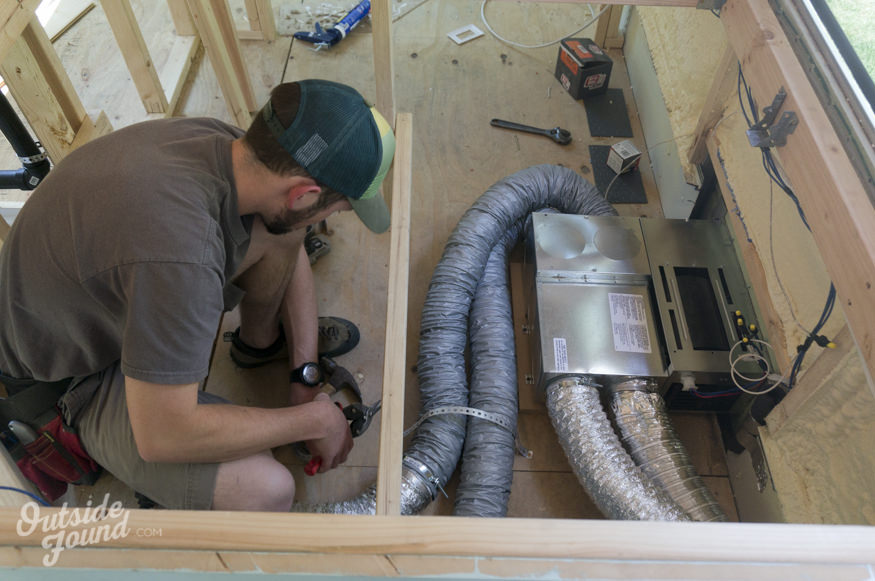 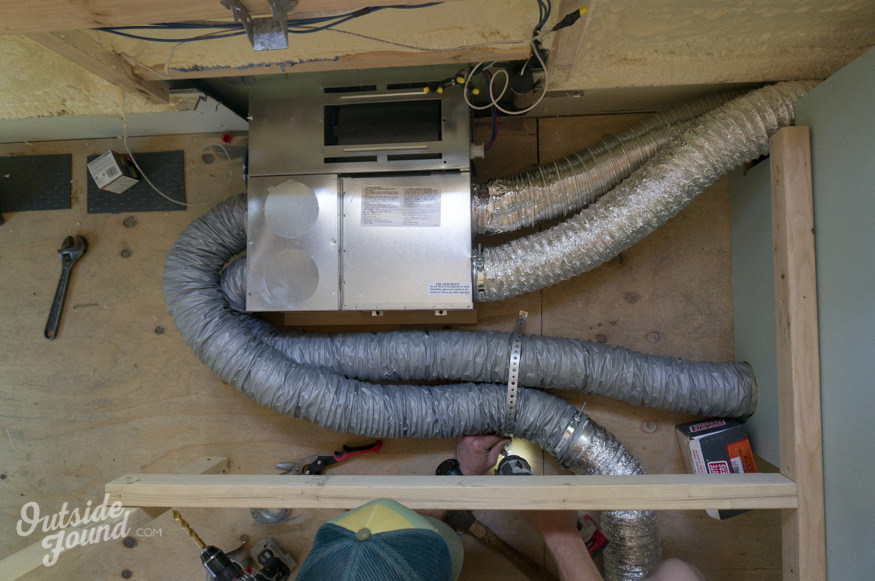 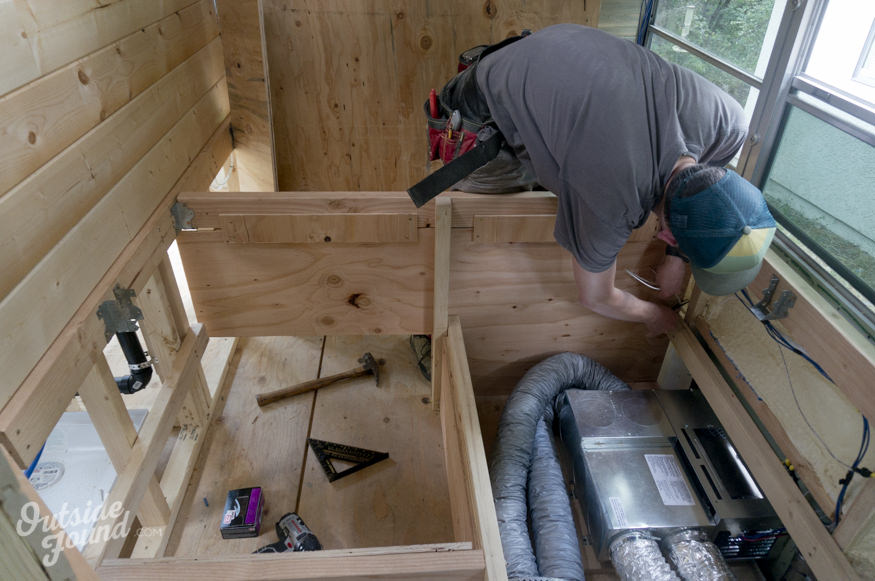 The bed turned out to be “one of those things” that we thought would be quick and ended up taking longer than we anticipated. Luckily this time it took longer because we were able to add in a bunch of extra storage that we weren’t anticipating. 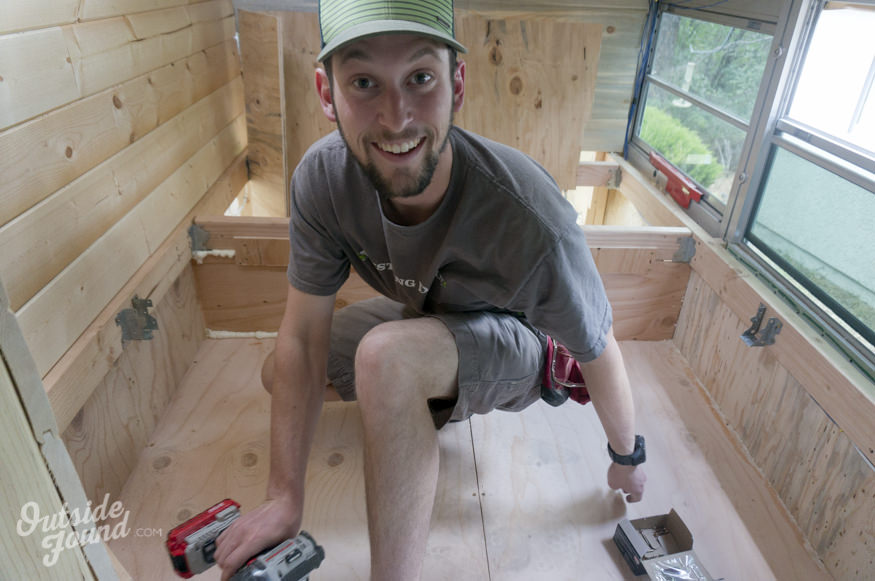 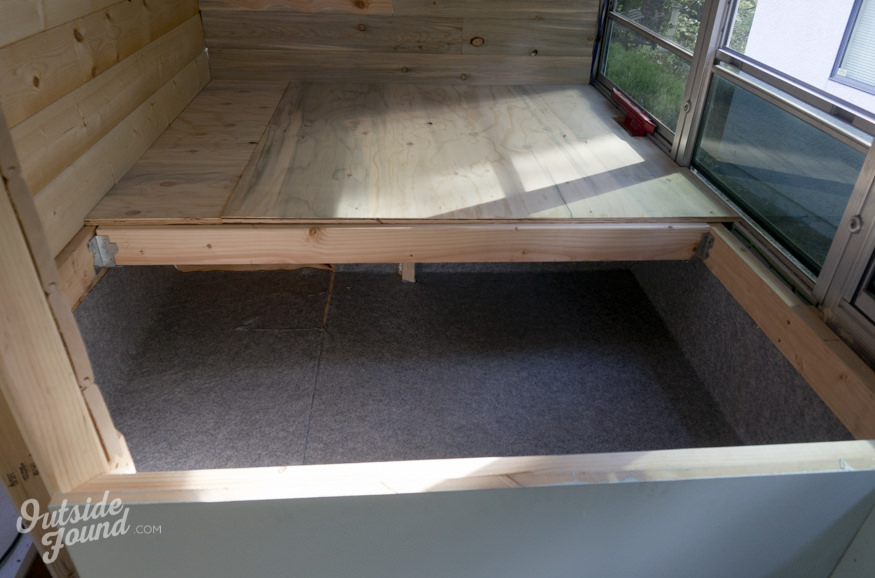 Almost the entire area under the bed is accessible for storage, except for the section occupied by the heater. The biggest area is accessed from the garage. We’ll use this for storing clear plastic tubs of gear, stuff that we don’t generally need to access inside of the bus.

The other storage area is located just above the heater, and can be accessed by a hinged lid at the foot of the bed. It’s about 5′ x 4′ x 1′ and will be a great place to store our clothes.

As we finished up the bed, we were startled by a sudden grinding noise – it sounded like someone was drilling a hole in the side of the bus. It took us a second to realize that the awful sound was our heater, which had somehow powered up on its own! Will rushed out to figure out what was going on and was able to quickly switch everything off. After the fact, we figured out that the two thermostat wires had come in contact accidentally, completing the circut and allowing the unit to power up.

The reason it sounded so awful was because the fan had come loose and spun itself into the motherboard of the heater, melting and knocking out a bunch of components. We aren’t sure when the fan came loose, whether in transit or in our garage before we installed it, but we are going to have to get it fixed before we can use it. It’s a bummer that it came on accidentally like that, but we’re pretty sure that it would have imploded no matter what.

It’s been rare on this project for things to work out exactly how we’d imagined them, but this soffit was an exception! We used the remainder of our tongue and groove pine boards to cover the wires above the windows and I am so happy with the way it turned out. Best of all is that they are relatively easy to put up and take down, so if we ever need to access the wiring underneath it won’t be a huge production.

Tommy and Jono were a great help getting these things up! 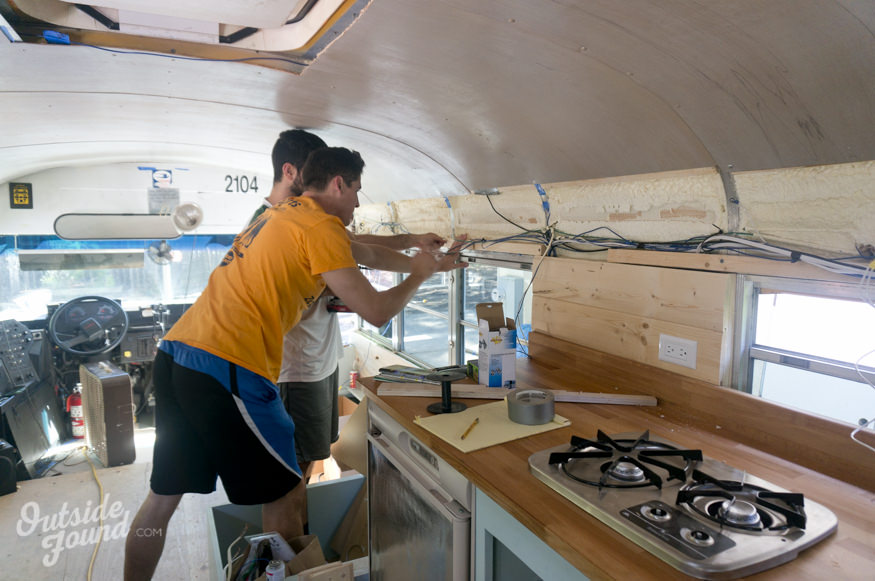 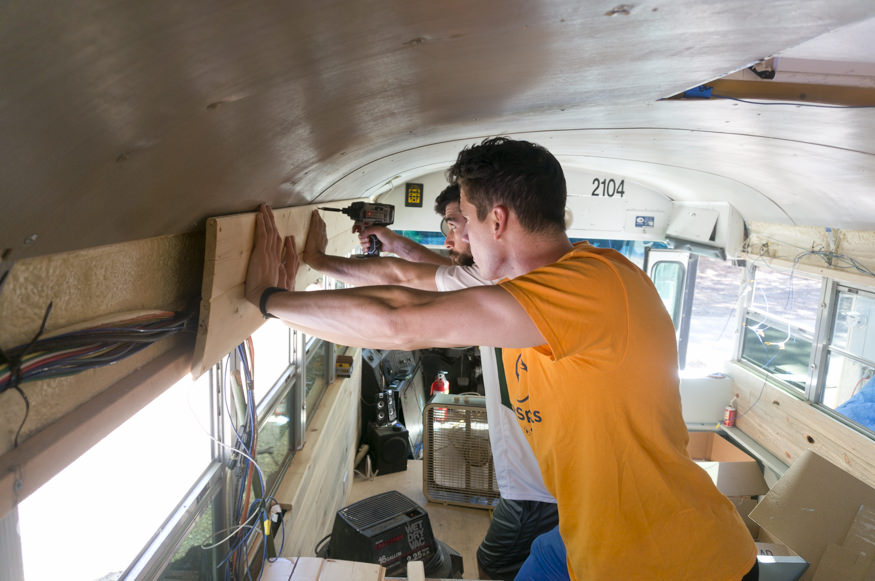 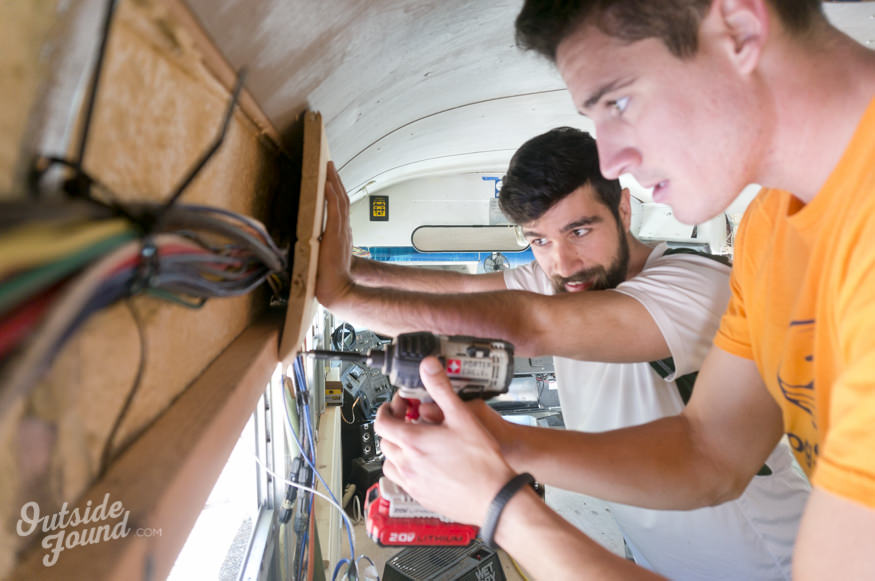 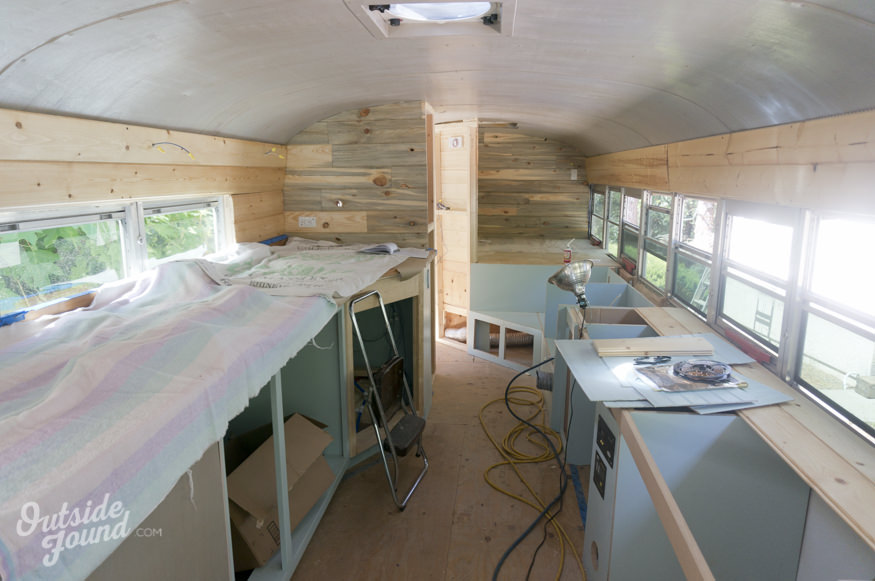 After doing some research on how to care for butcher block counter tops, I ordered some Boo’s Block Cream on Amazon and oiled everything up per their instructions. Holy cow, what a difference! 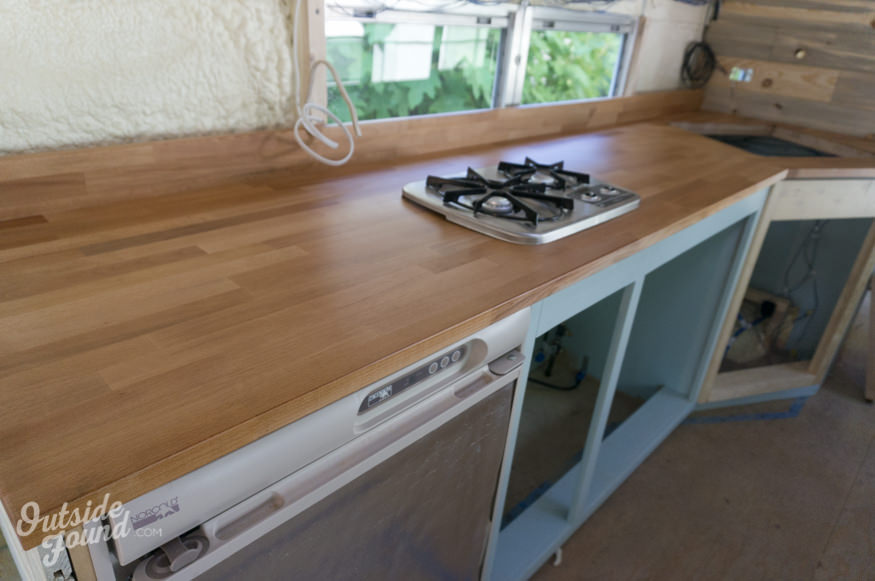 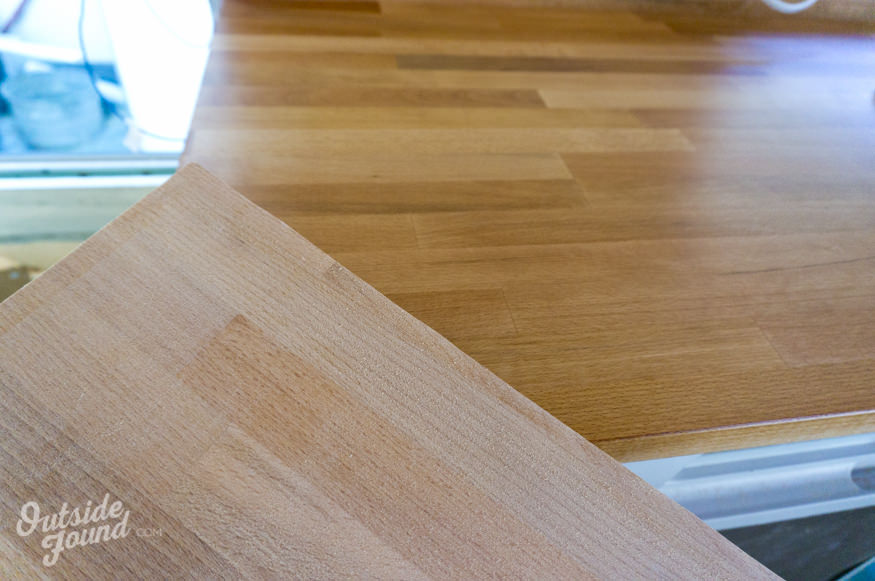 Unoiled countertops on the left, oiled on the right.

We knew we needed to sand and finish the interior walls we’d put up but were really putting it off because we thought it would be a very time consuming task. Joe and Danise took it on and did an awesome job – twice sanded, twice finished with a clear satin polyurethane and it looks great! 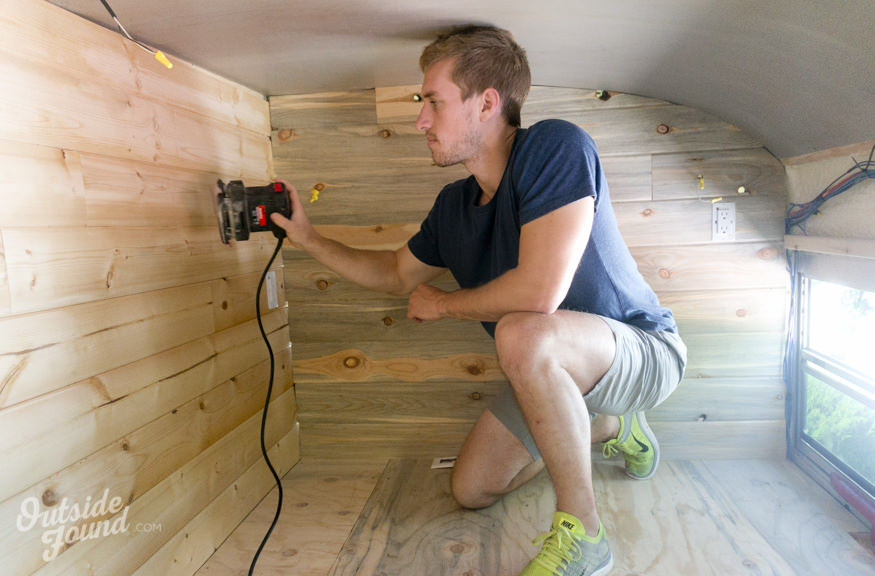 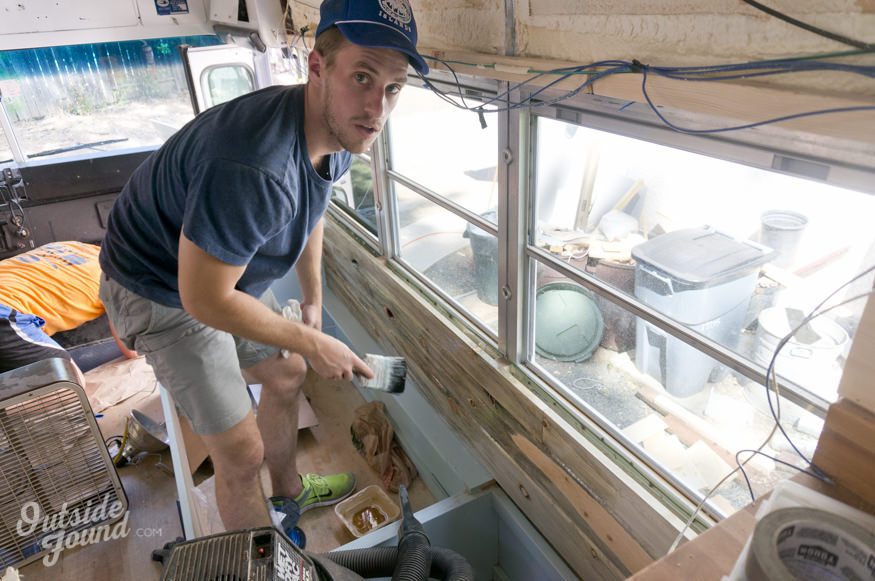 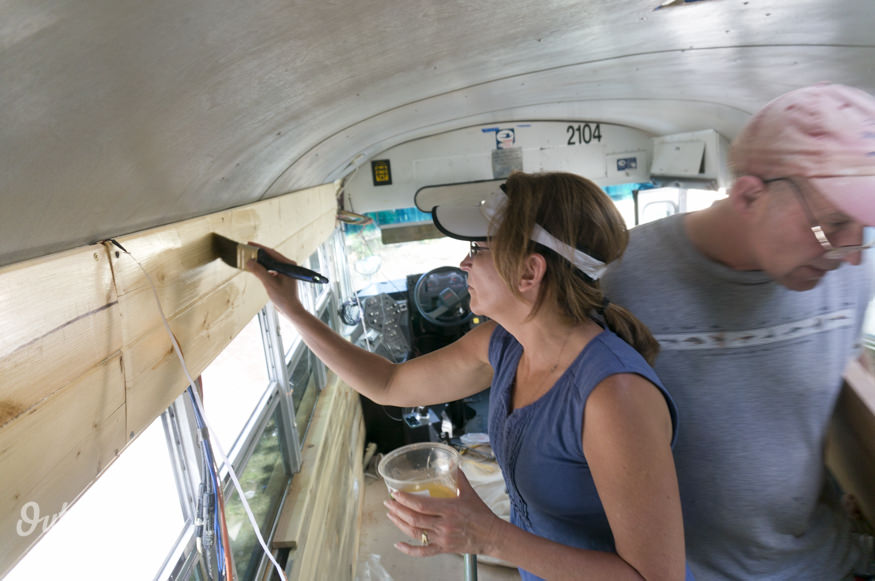 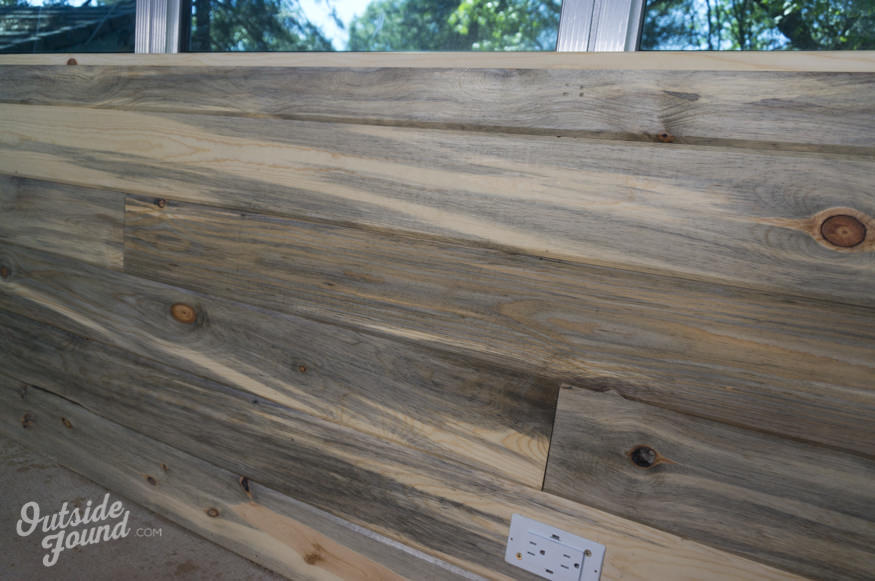 Installed new latches on the bins

Our old latches were rusty and didn’t work well, sometimes locking us out of the bins. Tommy installed some new locking latches and replaced all of the cables, making them work much better! 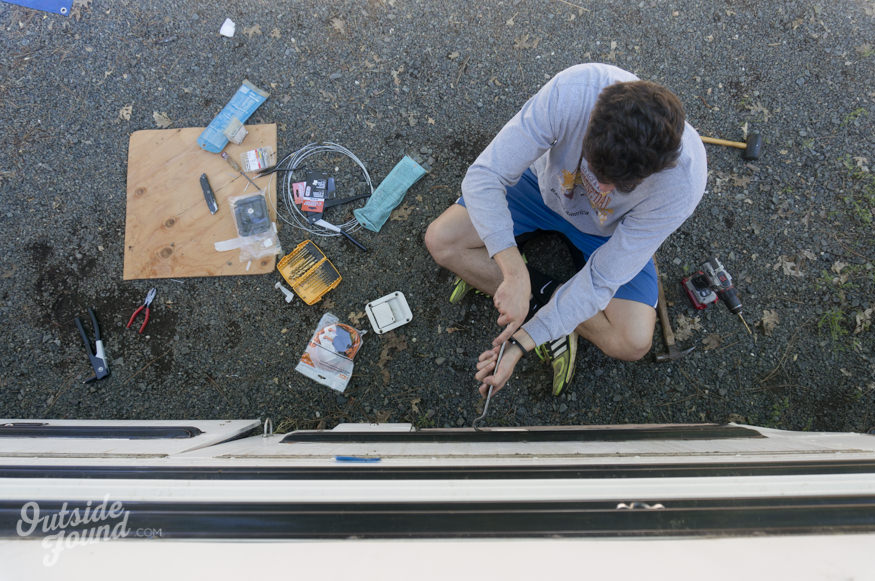 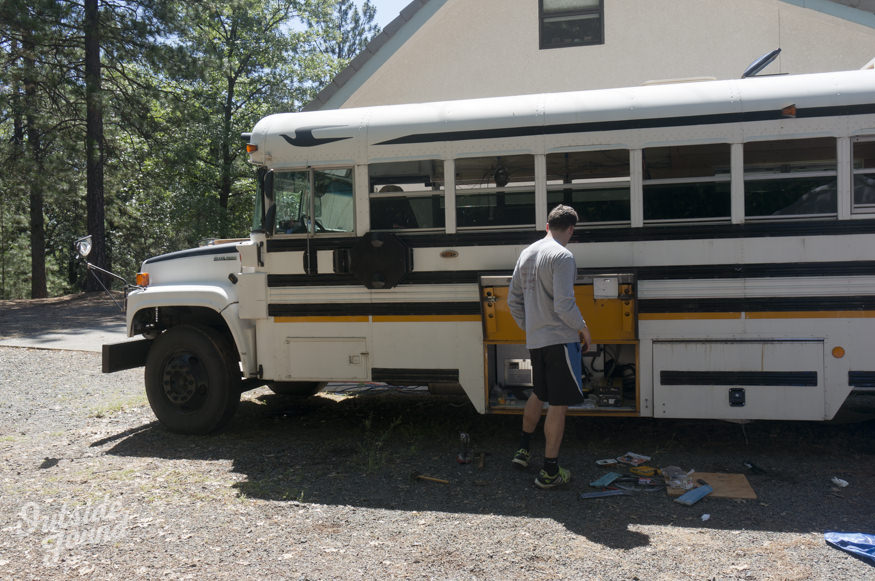 Installed insulation in the garage

What a happy worker Joe was! 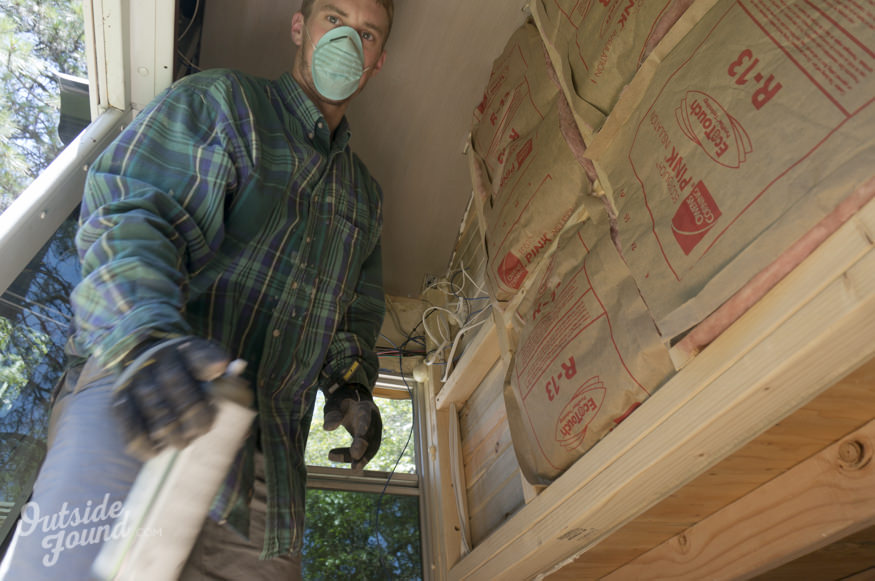 Installed a lock on the back door

Jono installed this big Masterlock on the back door so we can secure the garage, where all of our gear will be stored. 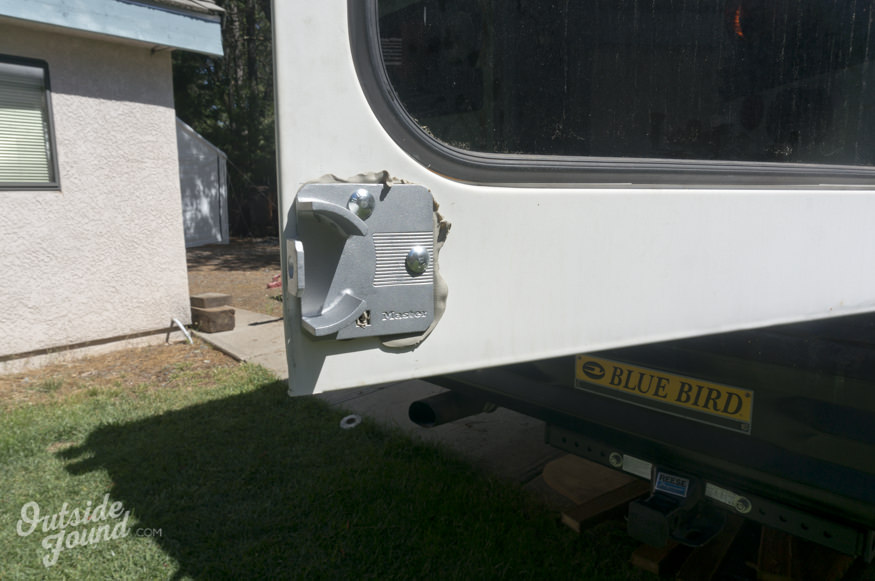 Will built this cool armrest shelf that sits at the very front of the bus with extra storage for keys, Hilde leashes, etc. We also added a handrail because the steps are very steep! 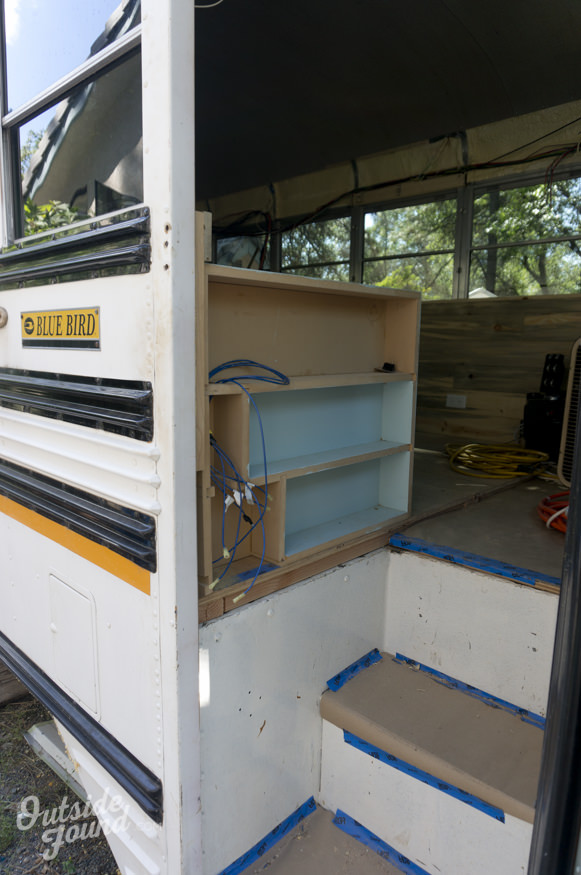 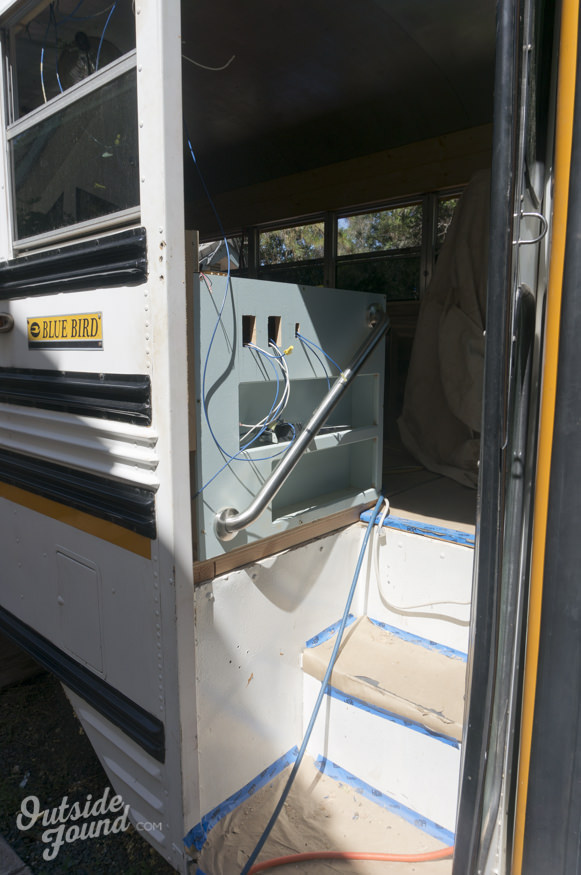 We decided to add this pantry space at the very last minute and are SO happy that we did. Will framed it out, Spencer fitted all of the shelves, and Rob made the face frame that will hold the door. It’s about 12″ x 8″ and will be a great spot to store all of our dry food! 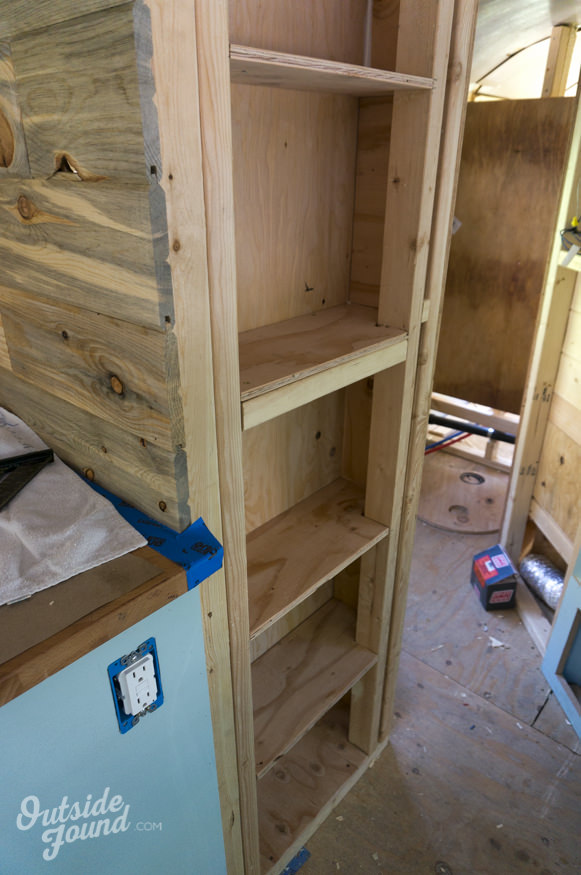 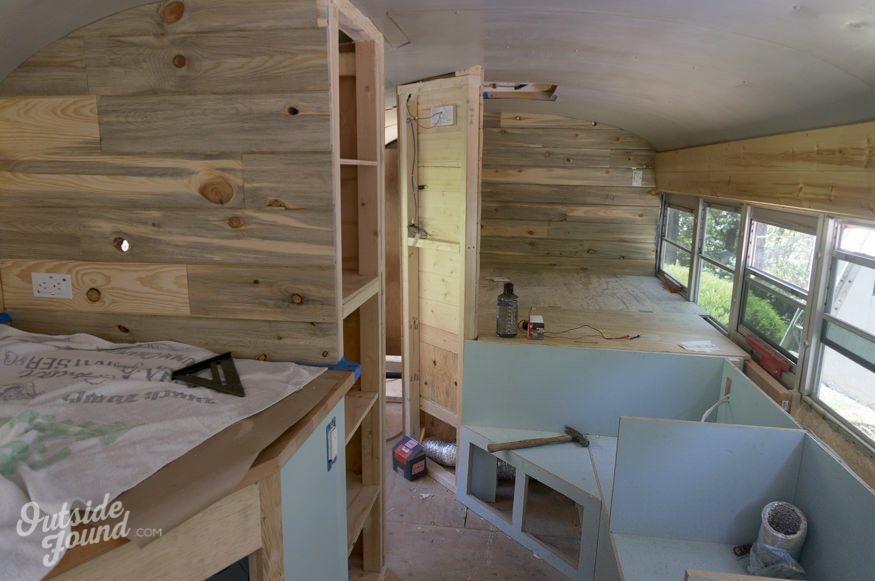 Will has been working so hard to get all of the electrical in and we are finally starting to see the end product. Once we got the soffit up we were able to install our LED rope lights that will be our main lighting. He also installed our spotlights above the kitchen and bed, which are very bright! 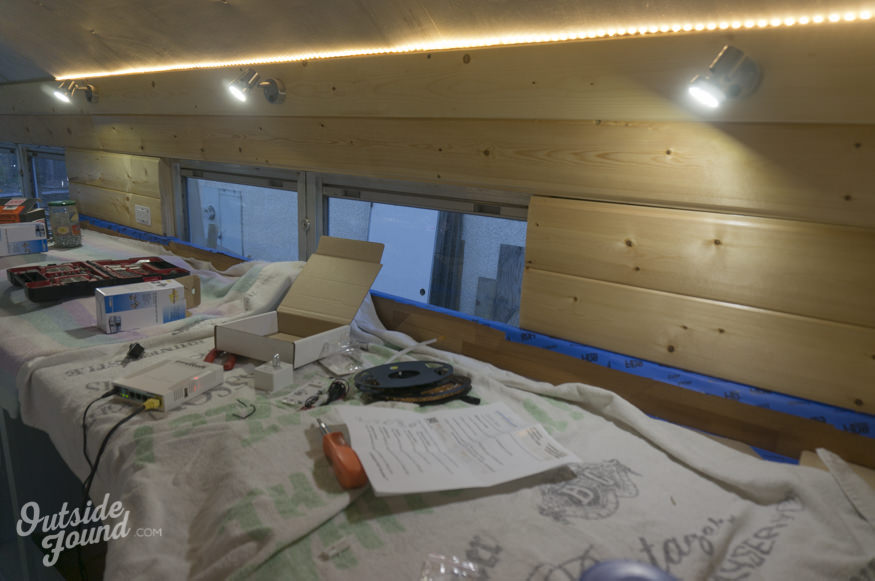 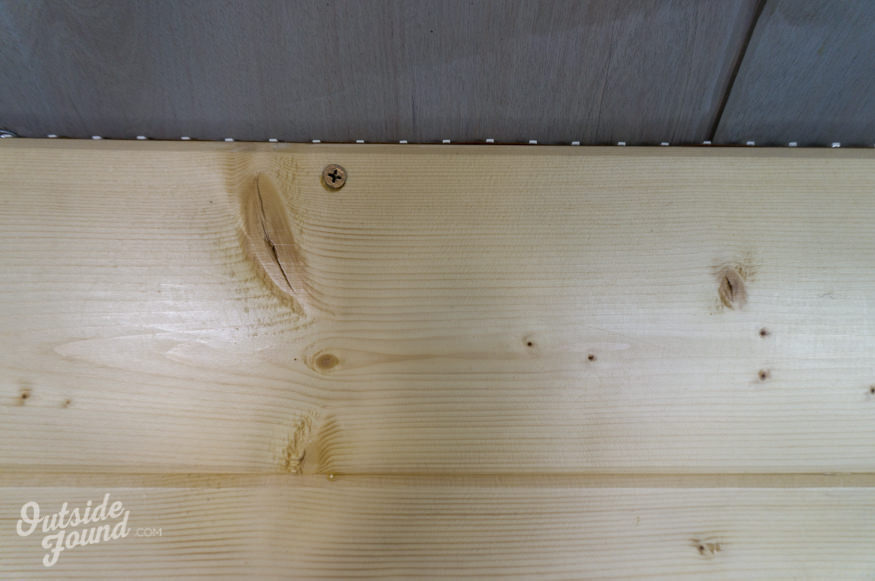 LED lights sitting on top of the soffit