Last week I had some pretty bummer updates. I’m happy to say that that is not the case this week – things are looking up! Here’s what we’ve been up to over the last few days:

Will and I entered ourselves and Hilde into the Live Your Kurgo Adventure contest a few weeks ago, hoping that our bus adventure would catch their attention. We had a blast making this video about how much we love Hilde and you guys really pulled through on the voting front! We heard last week that we are one of the grand prize winners and are so excited to have Kurgo as an official Outside Found sponsor!

Live Your Kurgo Adventure: Hilde from Will Hitchcock on Vimeo.

I also entered into a contest called “For the Love of Mom” for a blog called Tales of a Mountain Mama. They were looking for stories on moms in the outdoors, and I knew that the story of my mom and I hiking part of the JMT together would be a perfect addition to their collection. You can check my story out here! 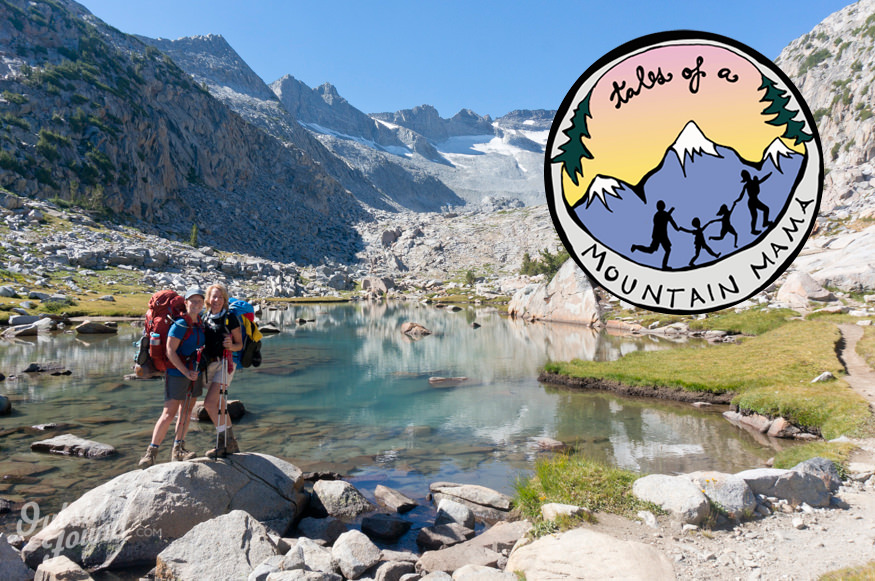 Check out our story at Tales of a Mountain Mama!

Having the spray foamers cancel on us last week was a huge, HUGE bummer. In the end we found another company to come out for a slightly higher price, but getting it done was worth it. The guys were here for almost seven hours, but they did a great job! It’s amazing how much of a difference the foam makes – we’re now able to work comfortably inside on a hot day, which was pretty miserable before the foam. 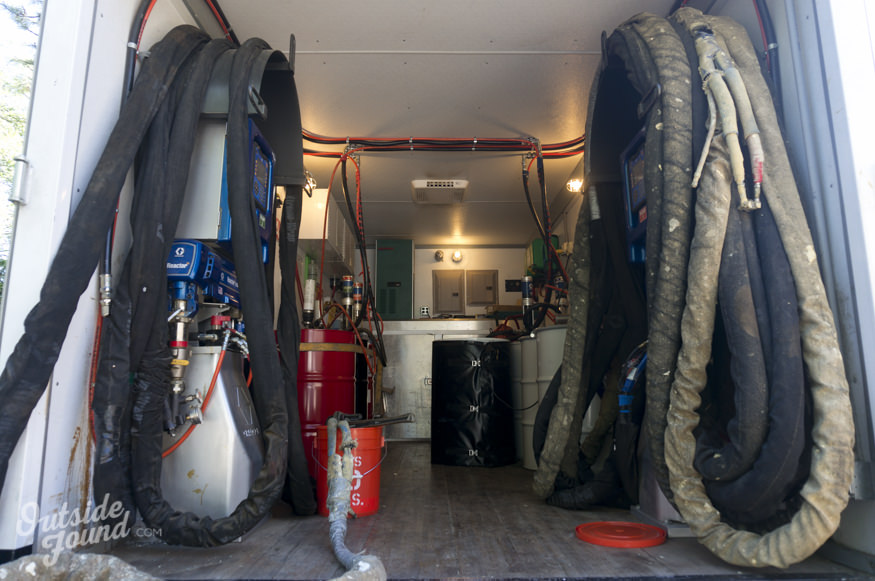 Inside the foam truck 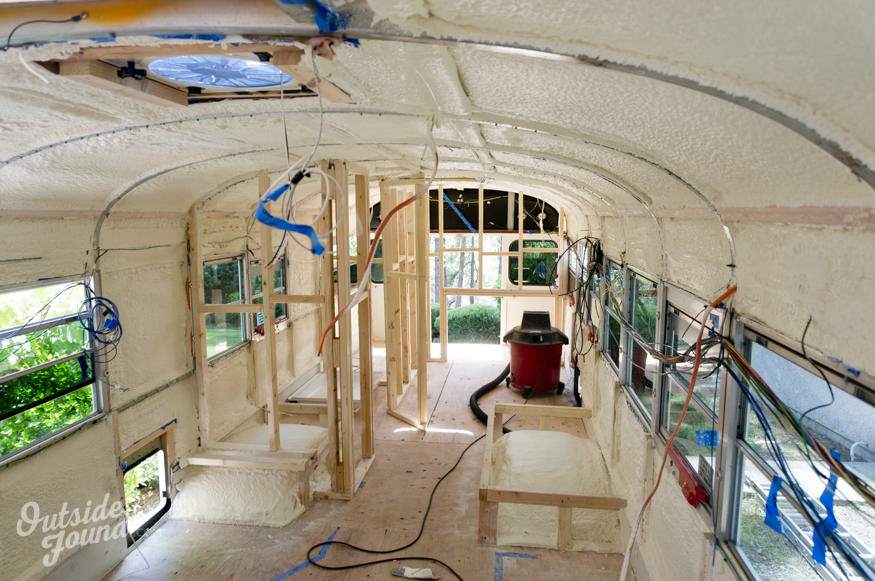 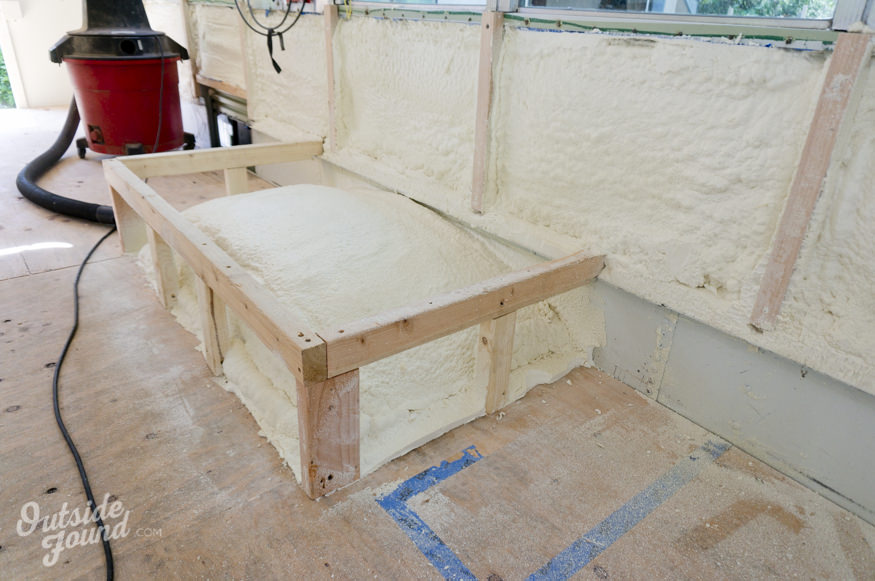 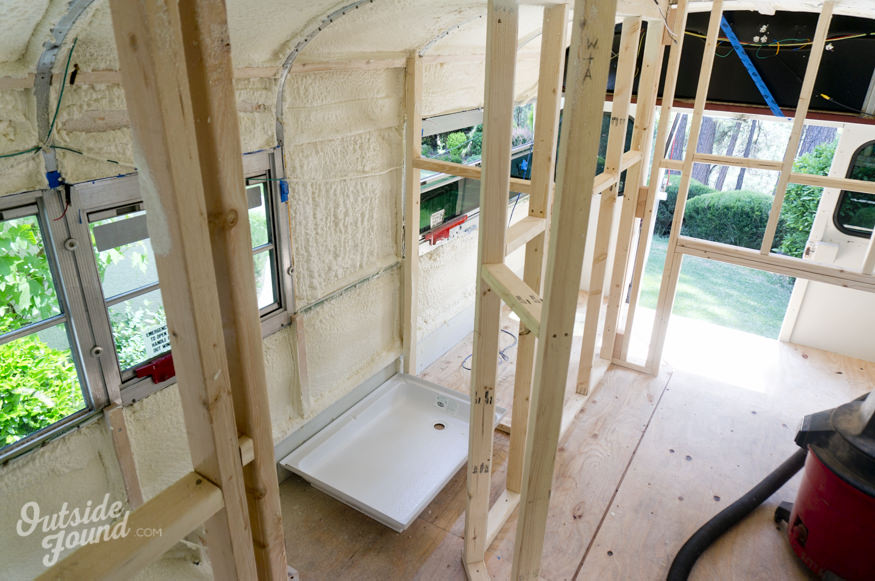 Originally I wanted white beadboard for our bus ceiling. It looks so classic and gorgeous! Somehow I got Will on board and we ended up with 8 sheets of white beadboard from Home Depot. We knew that putting the ceiling up was going to be more than a two man job, but we wanted to test it out before getting the crew over to help. 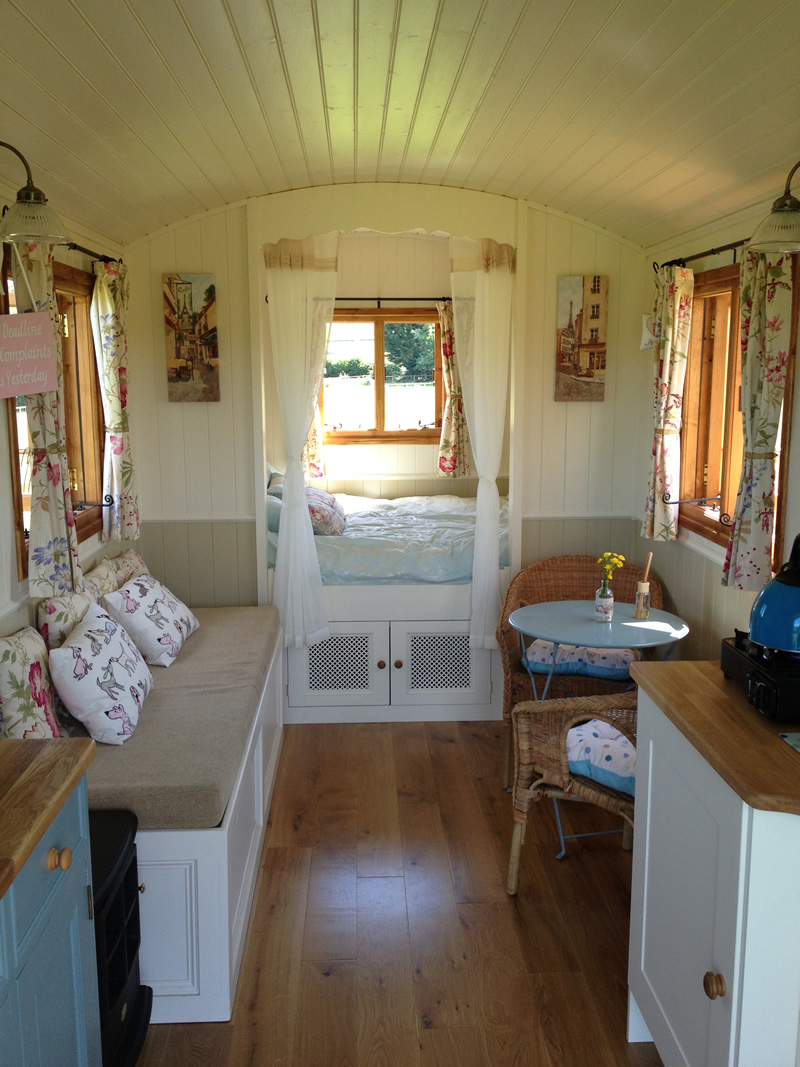 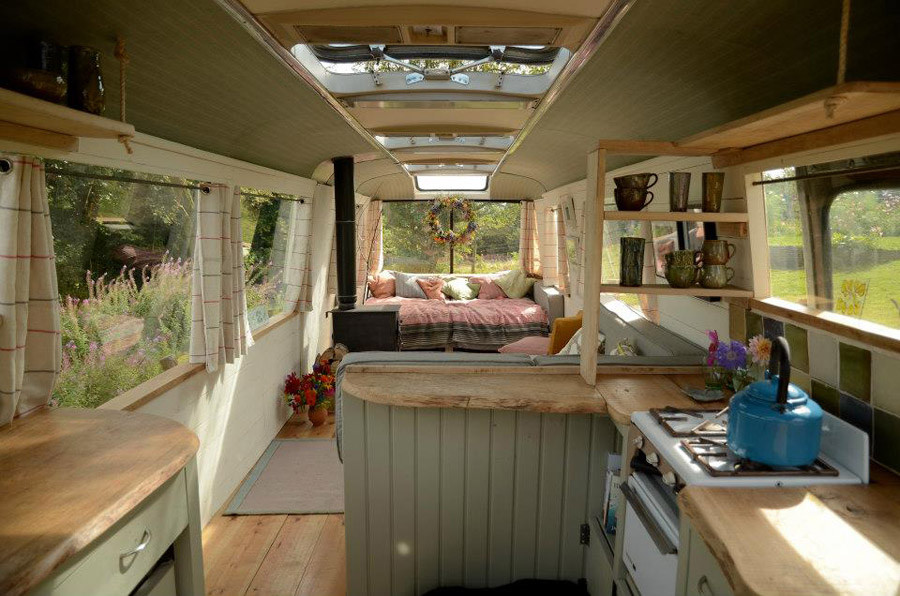 It’s a good thing we did, because working with beadboard is hard! We had an incredibly tough time getting the beadboard to line up correctly since there’s nothing “square” in the bus to align it with. After having such a hard time with ONE piece of beadboard we couldn’t imagine the pain involved in trying to line up 8 sheets of grooves, so we took it all back and started searching for a new ceiling material.

After 5 trips to the hardware store (Home Depot x2, Auburn Hardwoods x2, and Diamond Pacific x1) we settled on a super flexible plywood material from Home Depot. It wasn’t our first choice because it wasn’t great quality (some of the pieces were a bit moldy, gross!) but it was very affordable and, most importantly, flexible enough to make the curve.

The wood had a reddish tint to it that didn’t really jive with our yellow and gray Colorado Beetle Kill Pine. We were able to find a cool stain called “Sunbleached” from Varathane that turned the base color of the wood a cooler grey tone but still let the pretty grain lines show through. 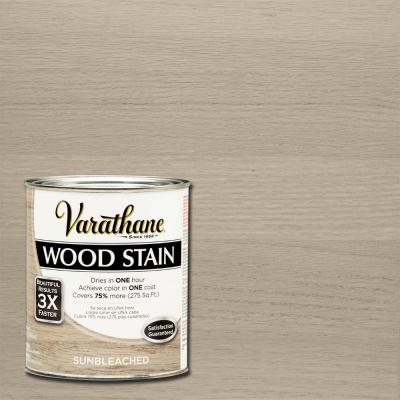 Not our actual wood, but pretty close! The final product came out much cooler than the Varathane example swatch, but we love it.

After staining all the wood we started attaching panels to the ceiling. The first one took about 20 minutes to install, and it did not look good. The wood was cracking in the tight spots, sagging in the loose spots, and overall just not working for me. Hoping it would get better with time, we added three more panels with the help of our amazing friend, Ty. 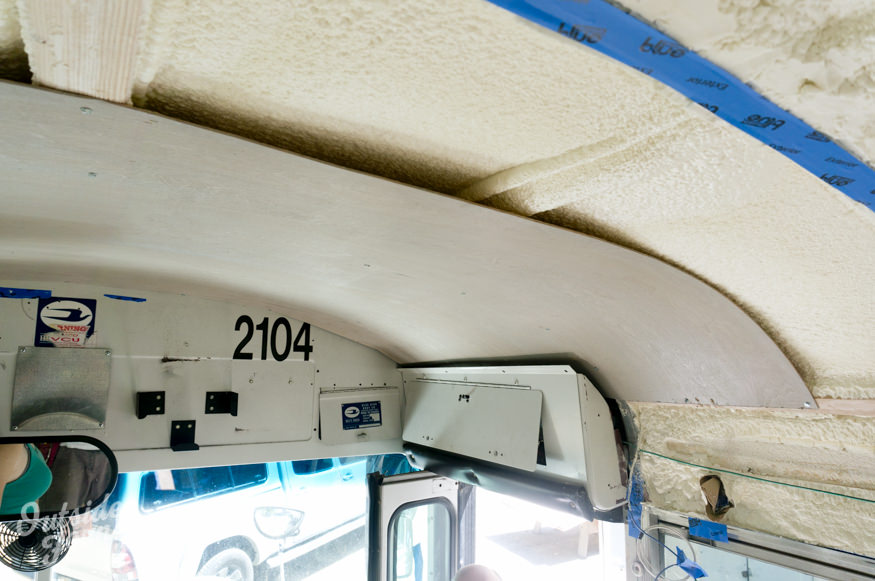 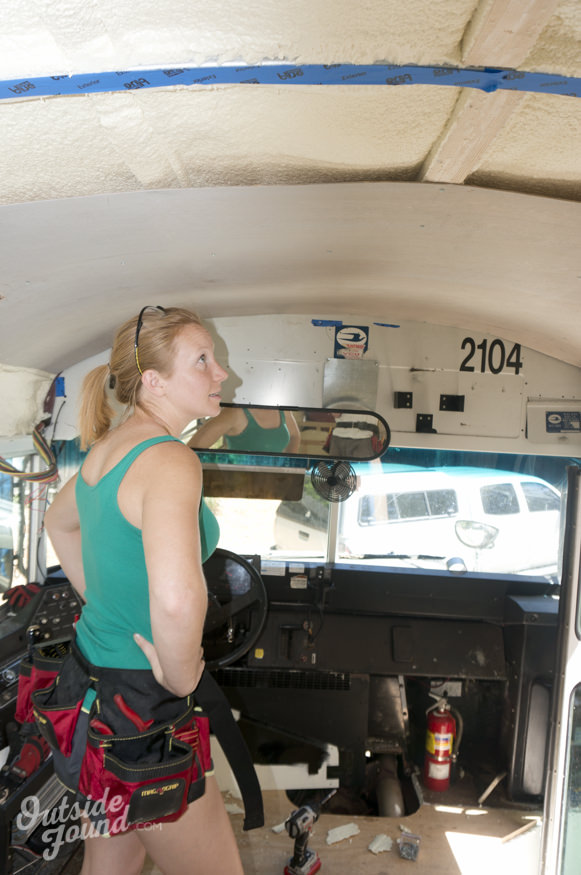 Not impressed with the sagging! 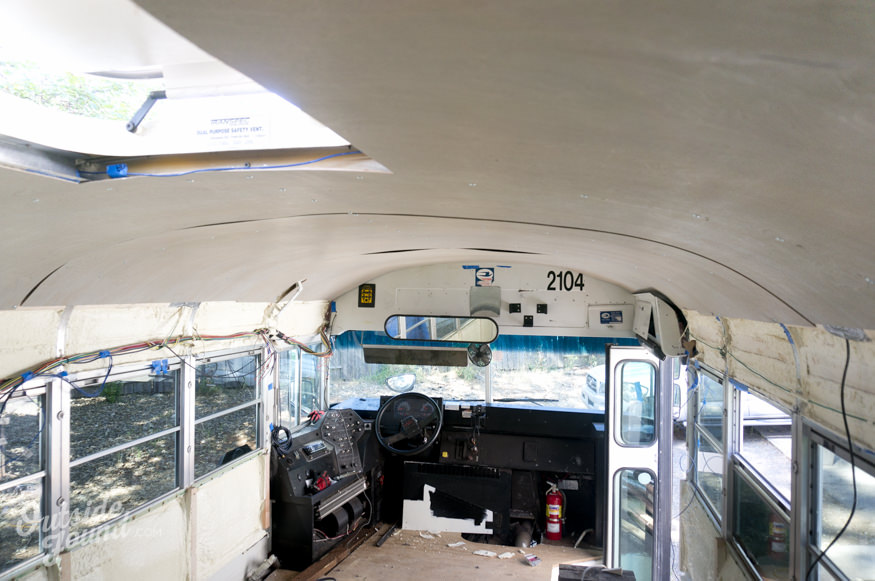 Lots of gaps and visible seams…

We finally figured out the correct technique as we installed the fourth panel: in order to conform correctly to the curve without any sag or gap we needed constant support down the sides as we screwed them down. That meant that Ty and I got a bonus arm workout while Will worked the screwdriver. It doesn’t look that difficult, but applying that much upward pressure for the time it takes to get these things screwed down is seriously hard! 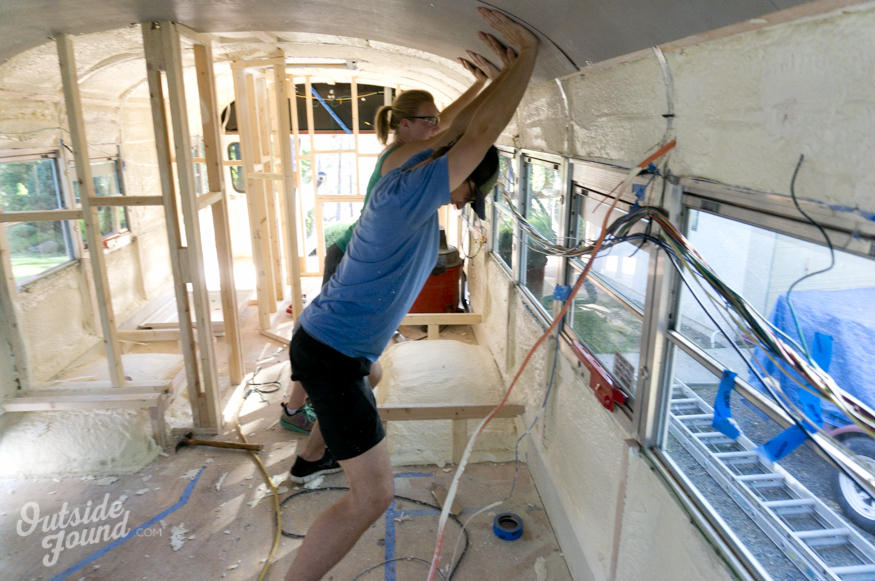 Assuming the position of painful wrists and shoulders.

After getting that technique down we were faced with a tough decision: should we power through and get the ceiling finished, or pull down our earlier attempts and put them up the correct way? Of course, we decided to take it down and fix the problems. We pulled down and replaced three panels and boy, do they look better! The only regret we have now is not realizing that we should have started at the back of the bus – if we had started at the back and worked our way forward the panels would have overlapped in the other direction and you wouldn’t be able to see the seams from the back of the bus. As it stands you can’t see the seams at the very front, but you can see some in the middle. 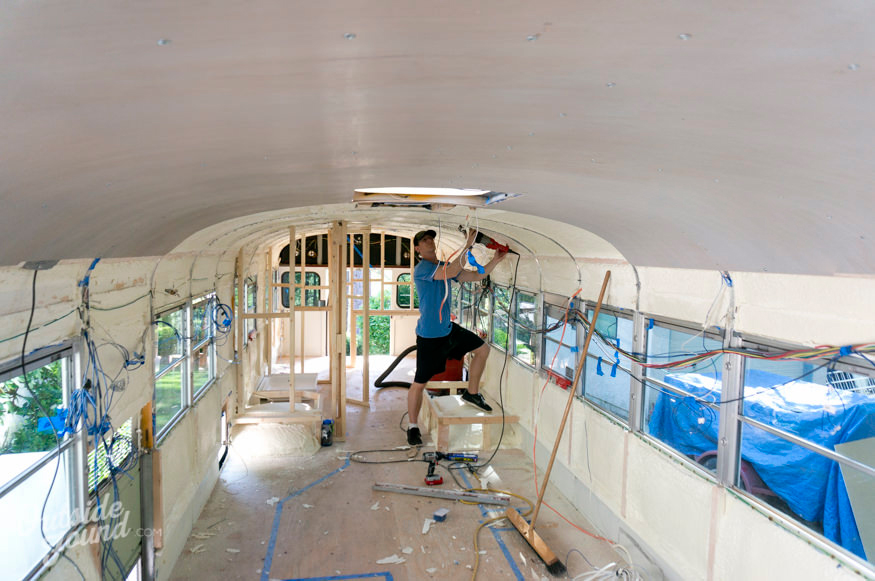 Disclaimer: it does not look this seamless in person… but it does look pretty darn good!

This ceiling panel struggle is a great example of what a growing process the bus is for Will and I. We are both very particular perfectionists, and the bus in our minds’ eye is perfect and pristine. In reality, our bus is going to be far from perfect, and deciding when to pull things down vs. live with a little defect is a challenge for us!

We are 90% done with the ceiling, the only parts left to install including the garage and the very complicated 45º wall (who’s idea was that, anyway?! What a pain that thing has become!) Once it’s finished we’ll paint all the screws with a paint that matches perfectly (can’t believe we found that on the shelf!) and spray it with a semi-gloss clear coat to finish it. It’s so cool to get in the bus and see something more that bare metal and insulation… things are coming together!

This thing has been mounted for two days and I’m still in awe over the way it happened. Before I tell you how they (I say they because I was definitely no help in this process) did it, let me give you some back story: 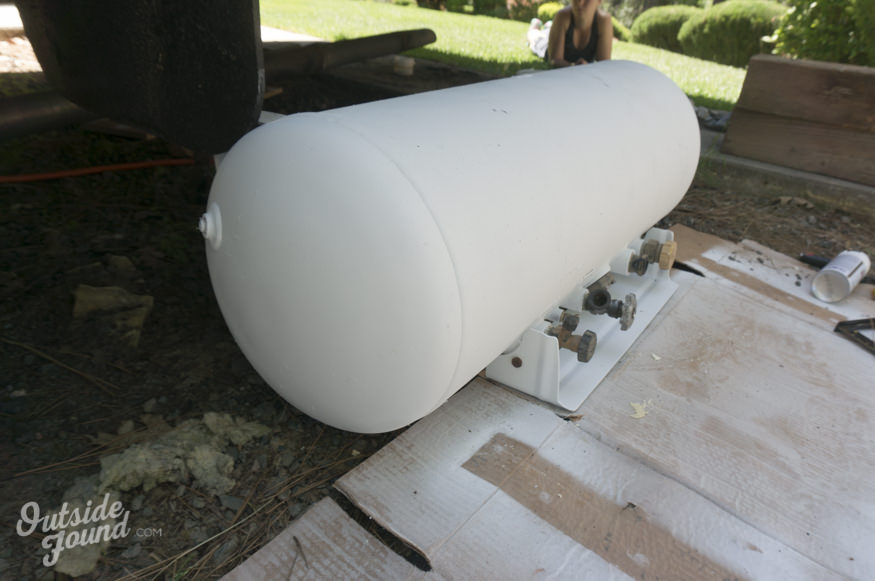 When we got the tank the junkyard guys told us we would need to take it to the propane company to make sure that the valves were good and get it re-certified. Will dropped it off and told them what we needed, but somewhere the message got confused. Apparently we didn’t need a recertification, so they filled the tank instead. We were happy that our valves were good and we didn’t need a re-cert, but were not so happy that our ~40lb tank now weighed 200+ lbs, full of propane! Will and I went to pick it up and I almost lost a finger trying to get the damn thing in the truck. It was heavy, unwieldy, and I had no idea how we were going to lift it 3ft from the ground to the frame of the bus for mounting.

Will’s dad Rob, on the other hand, was unphased. First he and Will drilled the holes using a terrifyingly powerful drill that has a reputation for slamming hands and ripping off pants (seriously!) and needs two men to operate effectively. Drilling four holes through 1/4″ steel took a long time and did not look fun from the observer’s perspective, but they got it done. 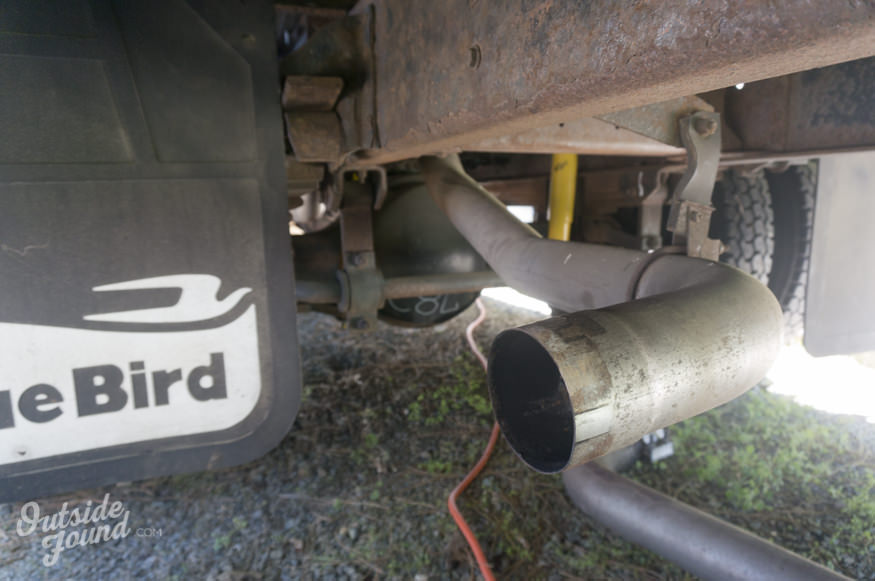 We had to take the exhaust off to mount the tank. 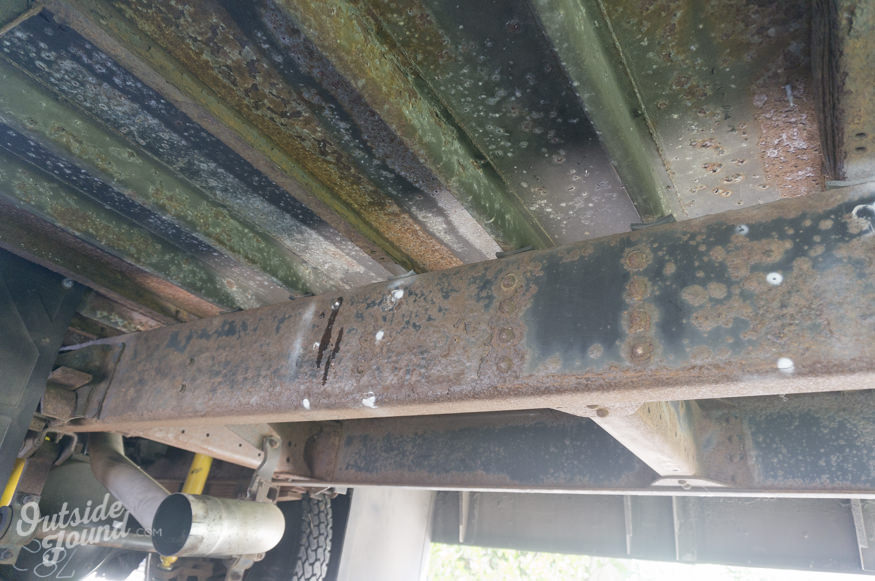 The guys used plywood and spray paint to create a template for the bolt pattern. 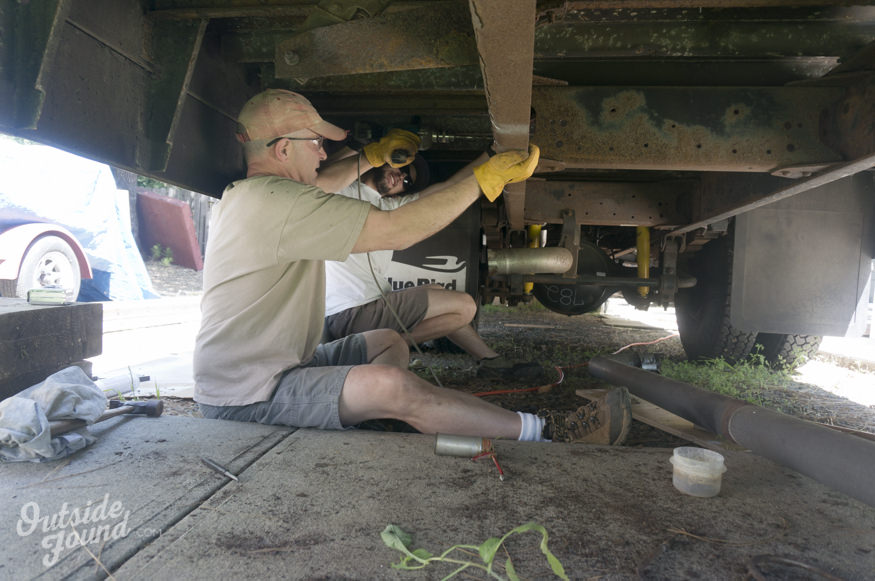 Next comes the amazing part. Rob, Ty, and Will lifted the propane tank inch by inch by stacking pieces of wood underneath it, creating a tower that eventually supported it at the height we needed. Will and I popped in the bolts, we pulled the scaffolding out from underneath it, and it held! I was amazed. Blown away. I still can’t believe that worked! 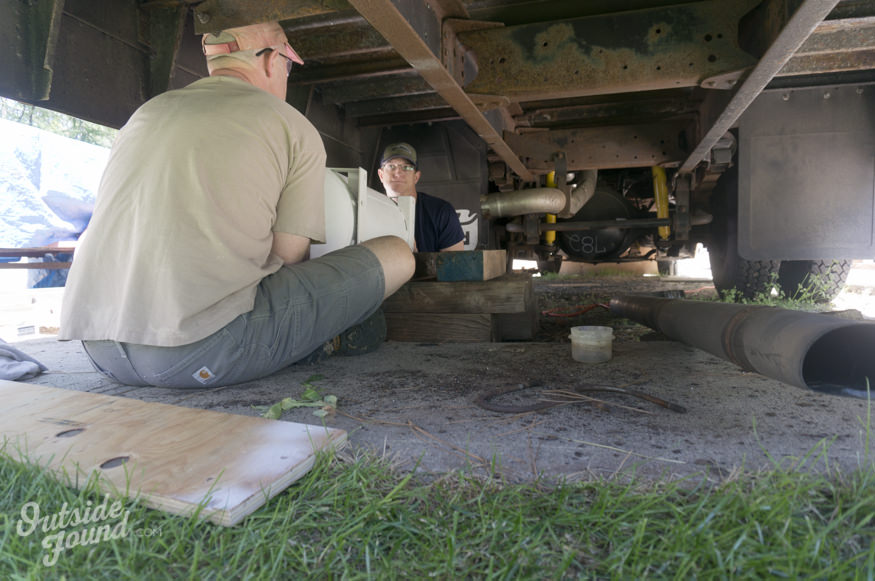 The start of the scaffolding… 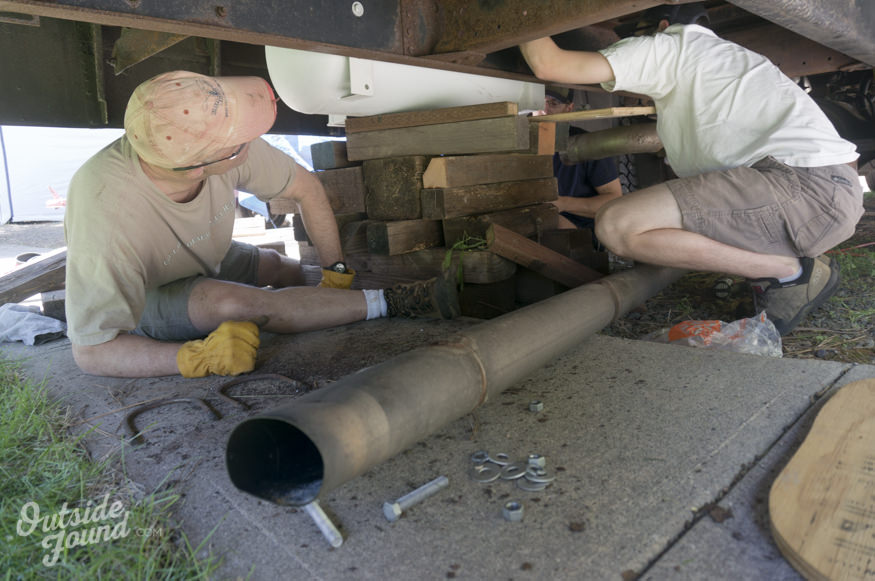 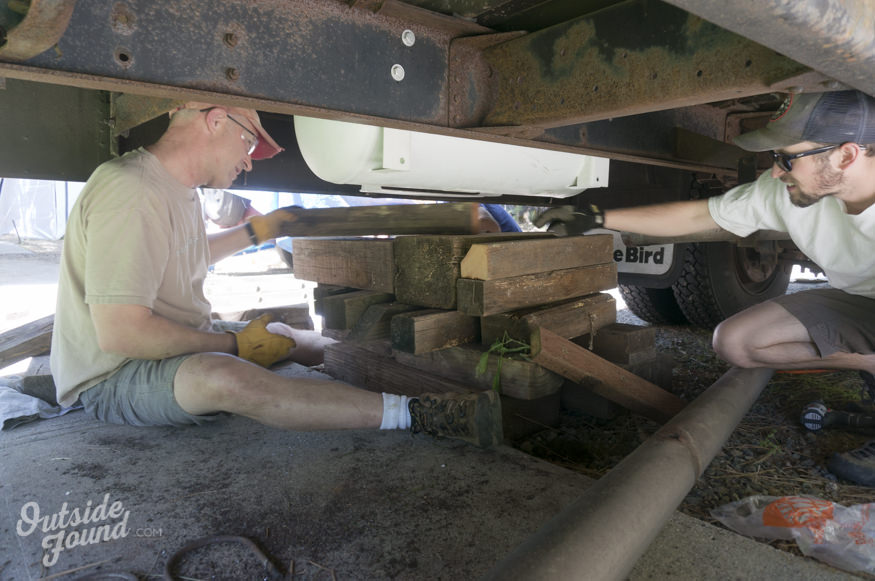 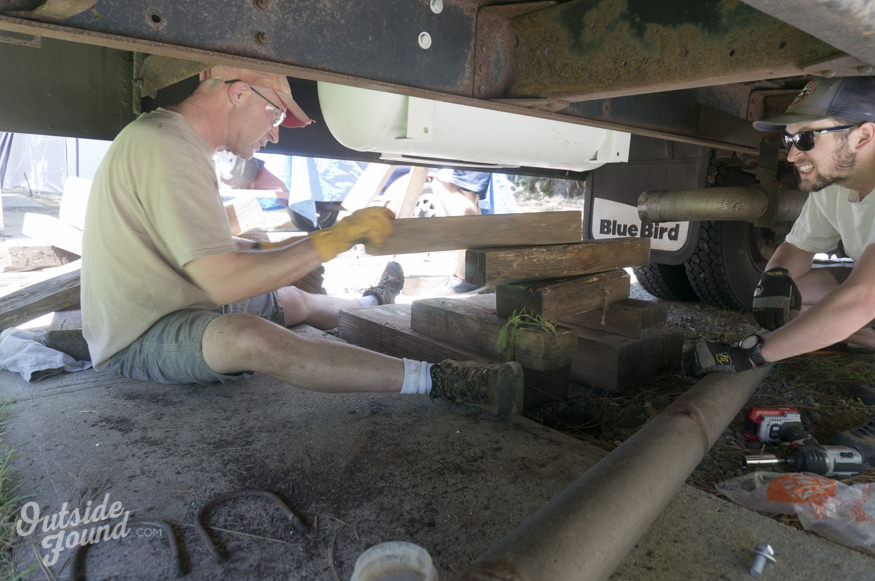 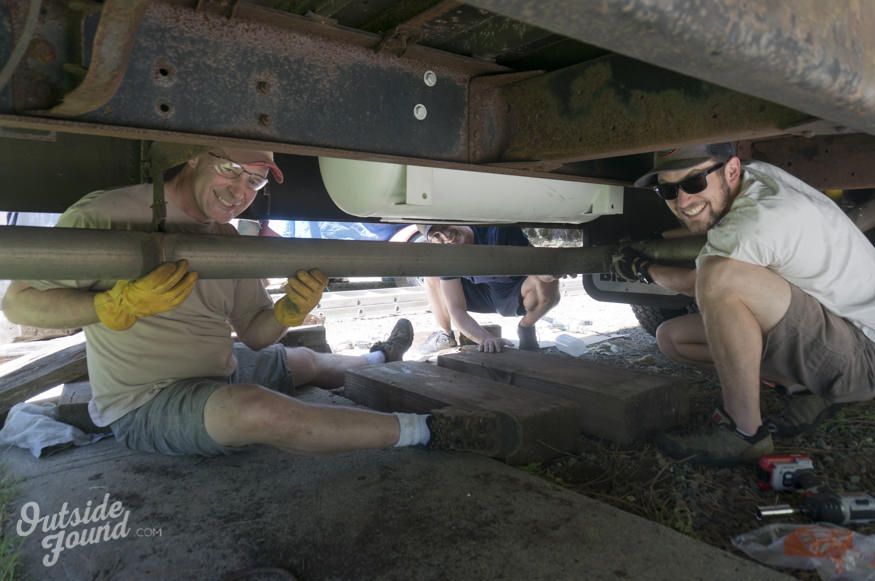 And the exhaust still fits. We are happy campers! 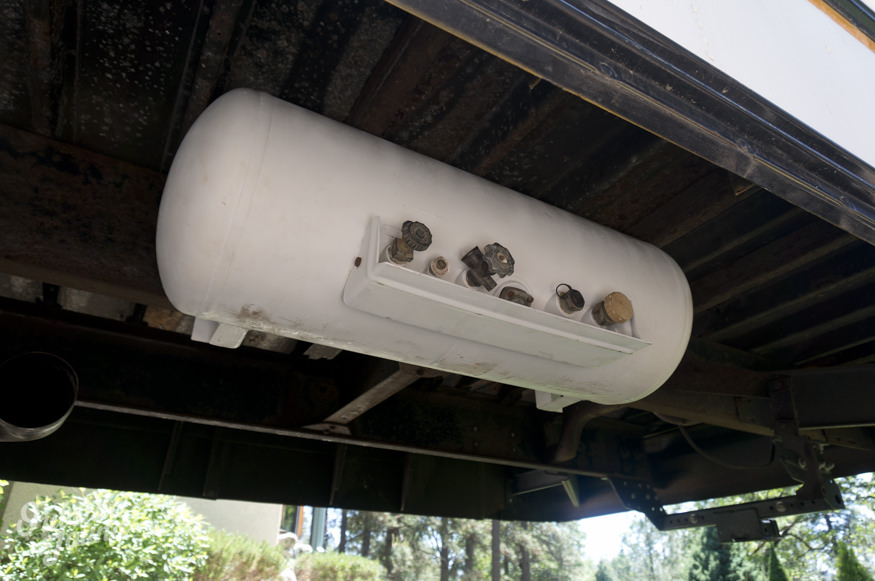 It’s a thing of beauty!

Things are moving quickly now and I LOVE it! To give you a glimpse into our near term future I’ll leave you with these numbers:

Life is busy, but we love it. See you soon!

Help Save the Outside Found Bus