We are officially within 1 month of our deadline! We have a LOT to do before setting off, and we’ve been making some great progress! Here’s what we’ve been up to in the last few weeks.

In our last update we had the ceiling mostly in. Since then we’ve fitted the rest of the pieces and added some finishing touches that make it look really nice! I was able to find a paint color that blends perfectly with the stain, so we painted all of the screws and blemishes. I also used some silicone caulk to smooth the transition between panels. When painted they really reduce the visibility of those seams, which I love! Finally, our wonderful friends Scott and Taryn came over to brush on the final coat of satin polyurethane finish. Scott, who is over 6′, had to paint on his knees to avoid hitting his head on the ceiling!

One of the major benefits of doing our conversion at Will’s parents house is the wealth of knowledge provided by his grandpa and dad. Having built several houses and many, many sets of cabinets together, we knew we needed their guidance when building our furniture. With their help we were able to knock out most of our major pieces over a few long days: couch, kitchen cabinets, and desk bases. 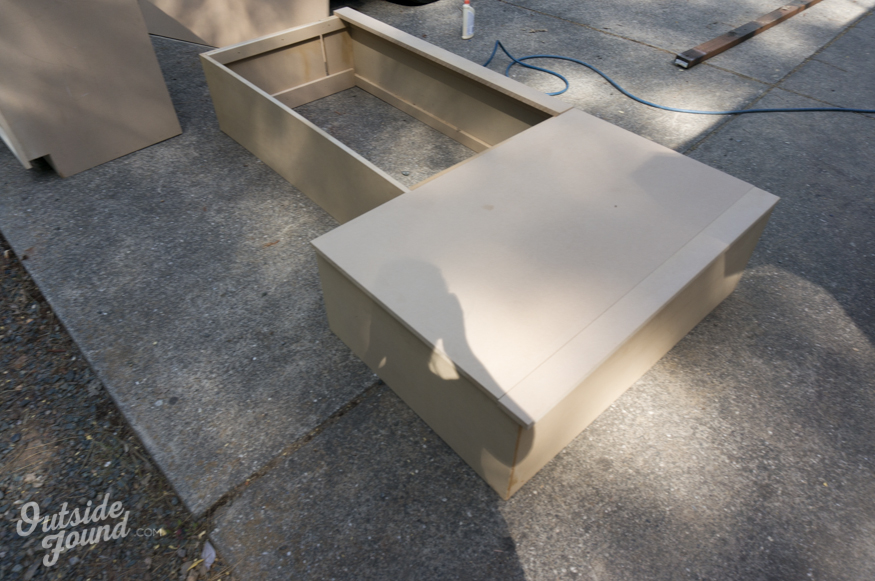 The base of our L-shaped couch. Both lids will flip up for easy access to storage underneath! 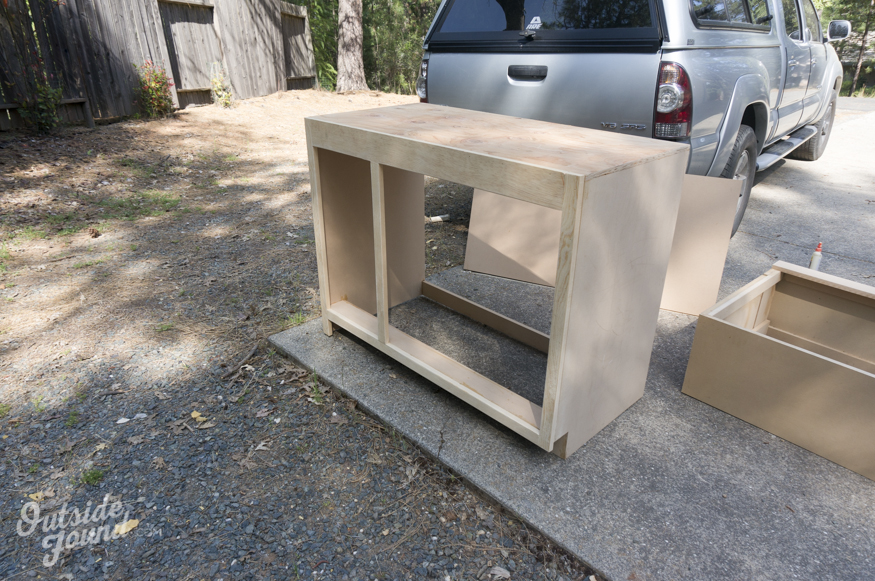 Our flat kitchen cabinet base – these openings will be covered by cabinet doors.

Rob and Bob were a great help with all of this stuff, and their patience is legendary. When designing the kitchen I really wanted a diagonal cabinet for the sink. Because of the weird dimensions a 45º angle would be too steep, so we settled on 30º. To me, that seemed pretty doable. In practice… that thing was terrible! Getting the angles right took a long time, but in the end they are perfect and I’ve learned my lesson about making furniture with funky angles!

We decided to use high density MDF (aka sawdust, glued together) for all of our construction because it’s only half the price of hardwood plywood. As is usual, we ended up making up the difference in “pain in the ass” fees. MDF is terrible to work with: it creates a fine sawdust mist that coats everything nearby, and is hard to clean up. On top of that, it splits easily and is incredibly heavy. 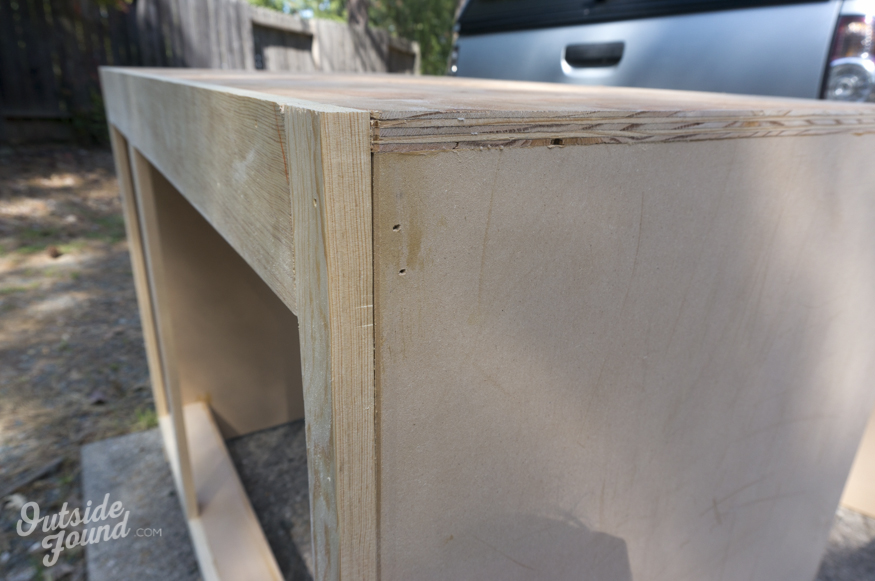 Side view of our cabinets. We used MDF for the main construction, plywood for the top (which will be covered by beautiful butcher block countertops) and pine board for the facing. 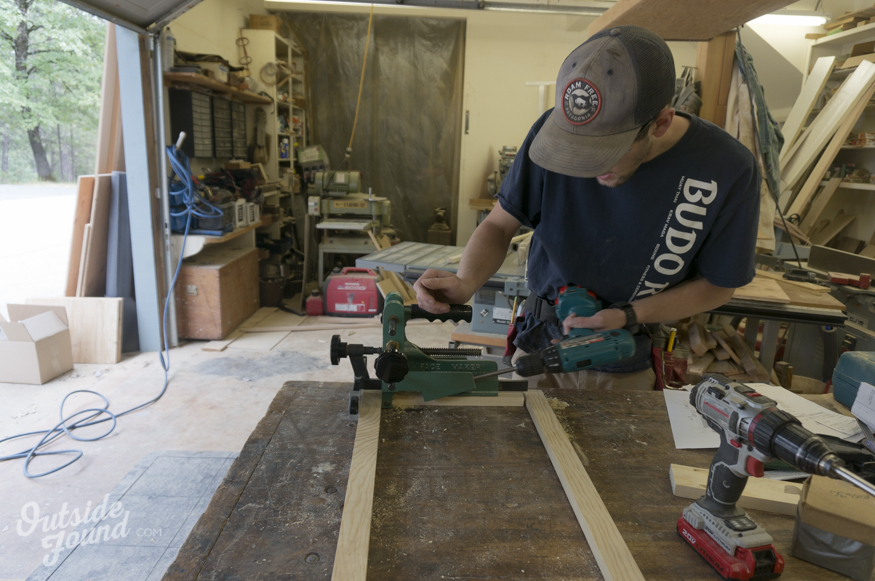 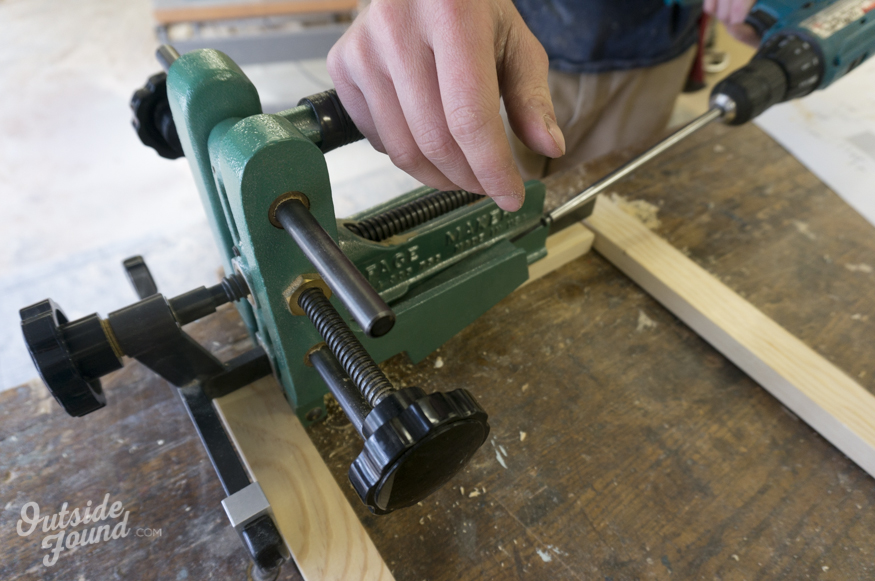 Will making the facing for the cabinets 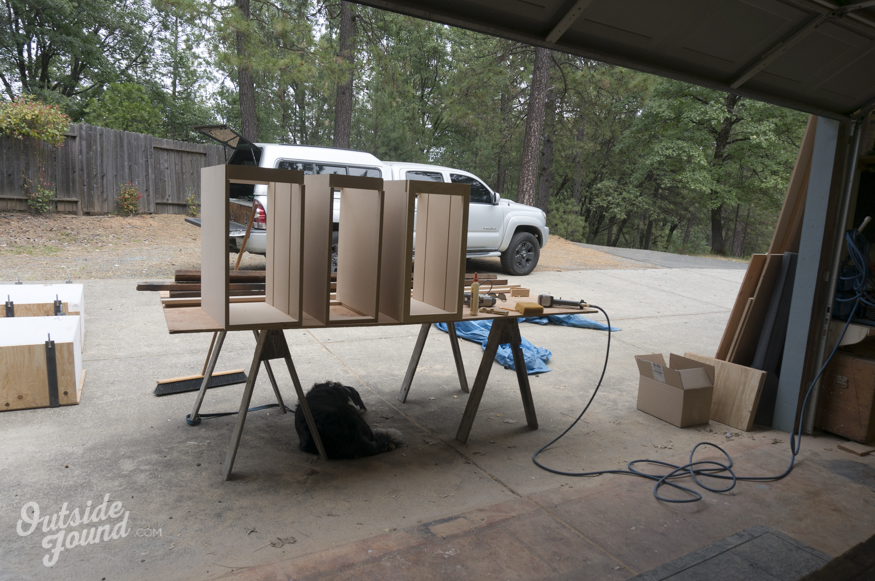 Another inconvenience of the MDF is that it must be painted to protect it from moisture damage. Originally we planned on spraying everything with a cheap paint sprayer we got from Harbor Freight. It should be known that both Will’s mom and grandma cautioned us against spraying – apparently the Hitchcock men have a history with these things! We tried it out and scrapped the idea before getting very far… the sprayer was hard to use and the quality was terrible. 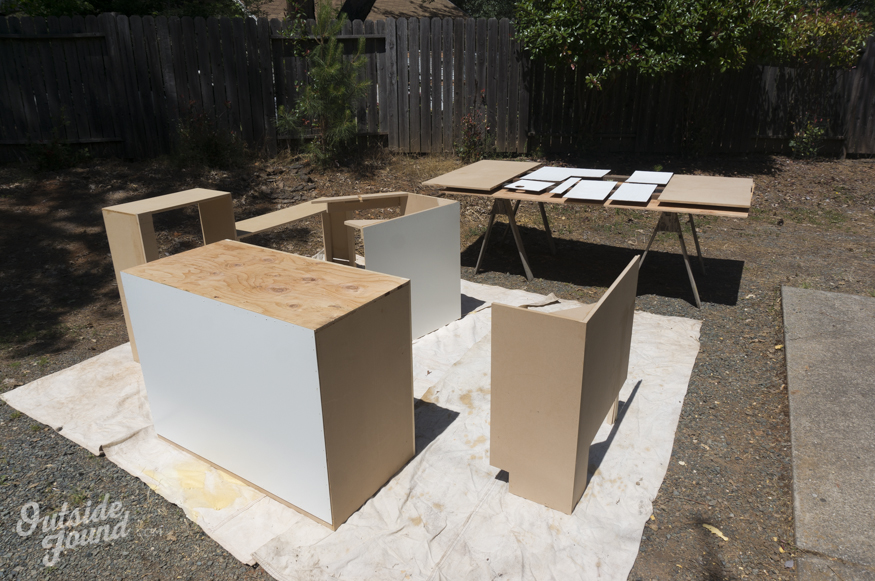 Getting ready for paint 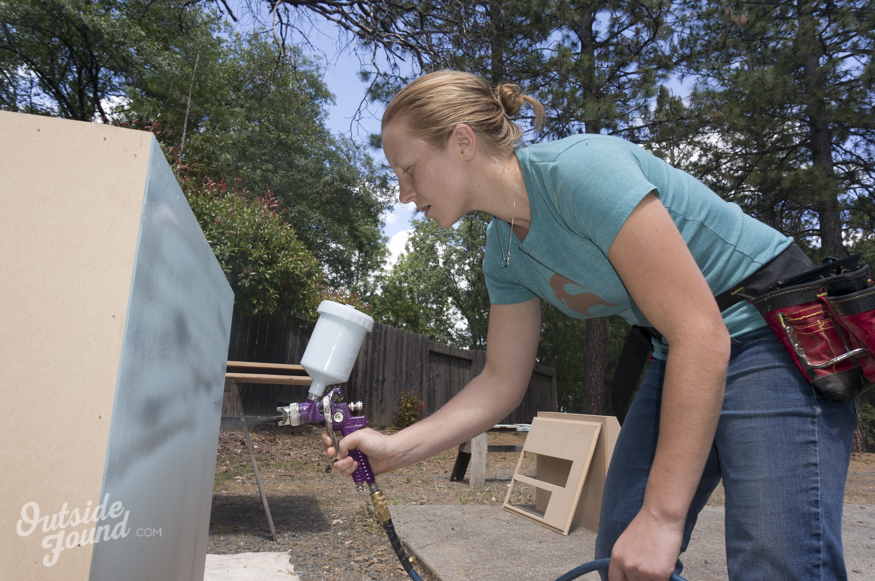 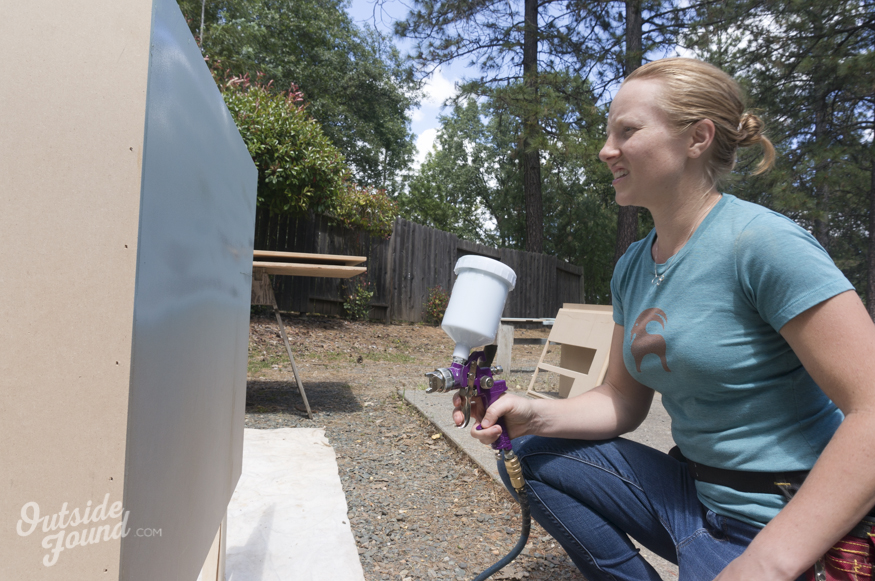 We picked a color that we were hoping would be ever-so-slightly-blue, just a hint of a tint. On the paint chip, the can, and our test piece it was perfect. Once it was painted on the furniture and loaded in the bus… it was BLUE! Like over the top gender non-neutral baby boy blue. 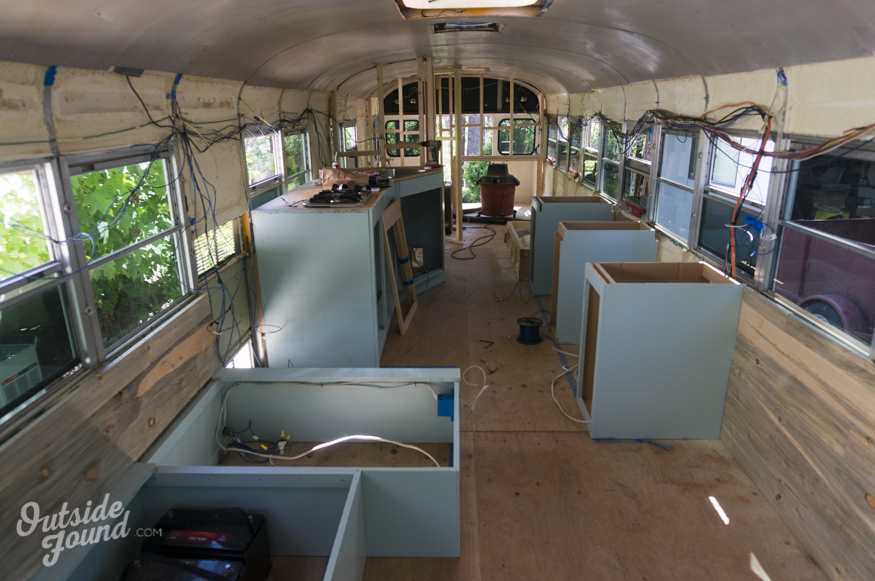 Getting ready for paint

I’m currently waffling on the paint. In some light it works, and in other light it’s awful. Will keeps reminding me that I’ll never see this much of it at any time once the bus is finished (once we get the counter tops, desk top, and kitchen doors in) but I’m not sure. There’s still a chance that we’ll repaint everything a soft white color. Agh!

Looking back, we might have been better off just going with the hardwood, and staining it instead. Hindsight is 20/20!

Will spent Saturday in Lake Tahoe with some buddies for a bachelor party, so I was on my own for the day. My project was to install our gorgeous Colorado Beetle Kill paneling on the front walls. This Beetle Kill is something we knew we wanted in the bus from the second we conceived of the project. It’s produced from trees that have been killed by the pine beetle, and doesn’t impact any healthy trees, which we love. It also has a beautiful blue/gray marbling that reminds us of Colorado. 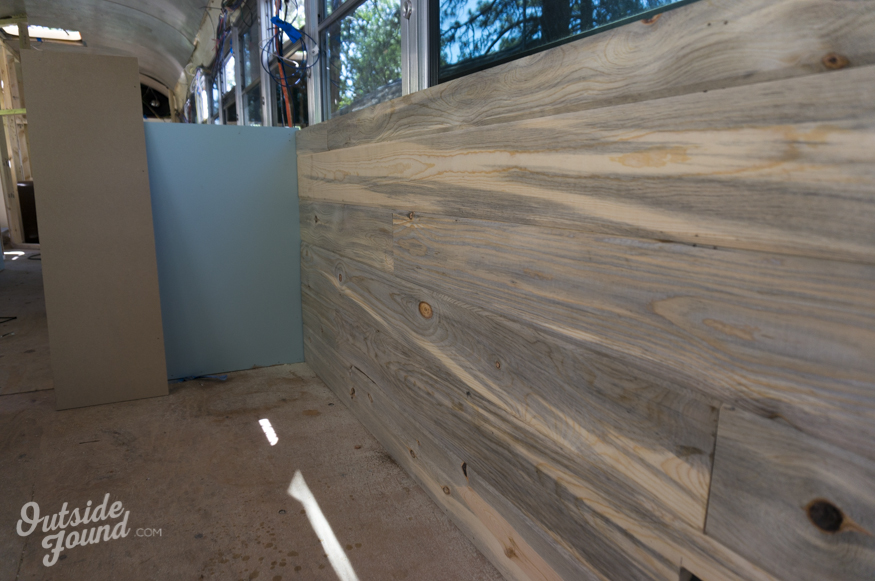 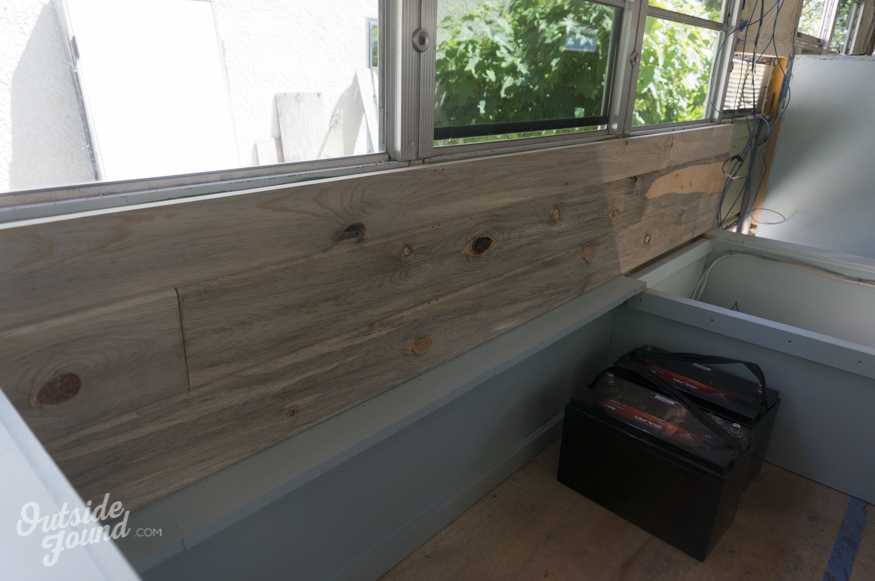 Putting the paneling up was pretty easy! I used the nail gun and some wood glue, following a technique I found on Youtube. It isn’t perfect, but I love it!

The front flooring has been a process. We ordered a cool heavy duty vinyl floor material for the front and back of the bus that will be able to handle all of the dirt, dust, and muddy paws going in and out. A few weeks ago I cut the pieces and glued them down with a great 8x Adhesive from Home Depot that we’ve been using for everything. I weighted it down and let it sit overnight. When we came back the next morning it was perfect!

Later that day I noticed a problem. The sun had warmed everything up and the flooring on the middle step had bubbled. Upon further investigation we realized that the glue hadn’t taken to the floor at all. For whatever reason, the adhesive did not play nicely with the chemicals in the flooring. 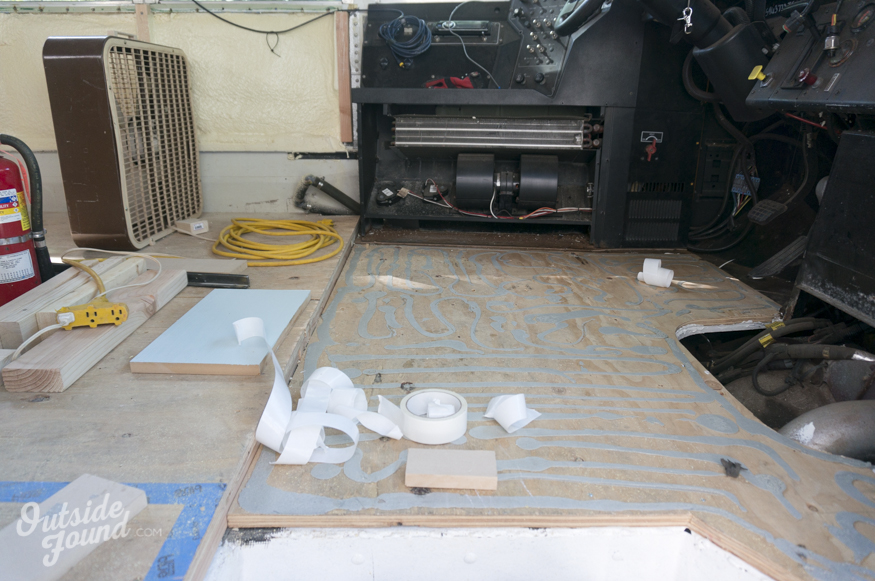 Aftermath of pulling the floor up

Disappointed, I pulled everything up and scraped off as much glue as I could. Not wanting to have another failed attempt, we did some research on proper glue before trying again. Now we have the front floor down and will be able to outfit the stairs in a few days.

Will has been hard at work running all of our electrical, which is a much, much larger task than I imagined it would be! We’ll have 12v lighting and appliances and 110v outlets, which will all run off our our solar + battery bank system. Our contractor Byron came out last week to hook everything up, so once Will finishes wiring the switches and outlets we should be good to go on the electrical front. Woo hoo!

Up until now we haven’t thought much about plumbing. Last week when Byron was working on electrical he also gave us a thorough walk-through of the plumbing setup, which I’ve been working on over the past few days. Due to the tight constraints of our drains and tanks we have a very silly rat maze of plumbing – lots of twists and turns to get everything fitting in the right spots. Luckily it’s pretty easy to do if you are using the right size pipes (which turned out to be amazingly difficult for us to figure out yesterday). Plumbing should be done in the next few days as well! 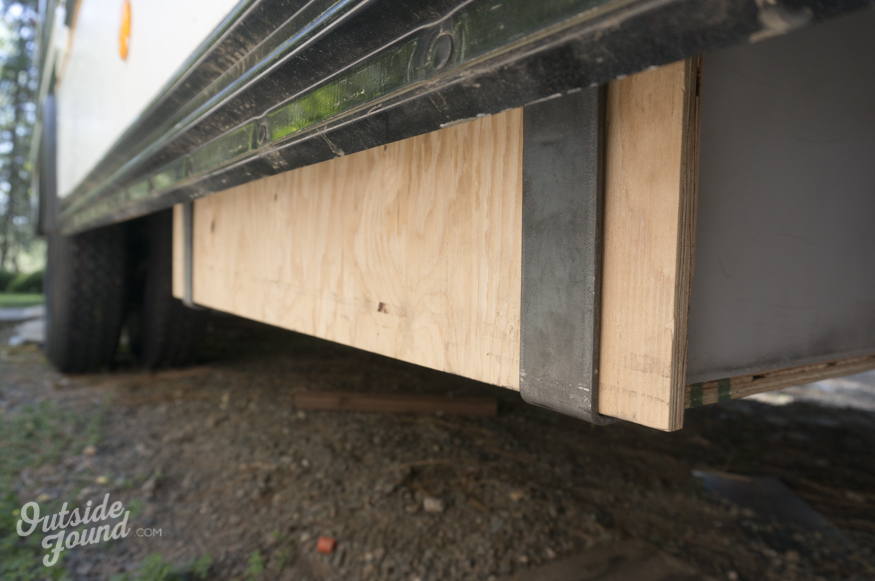 Got the tanks hung! 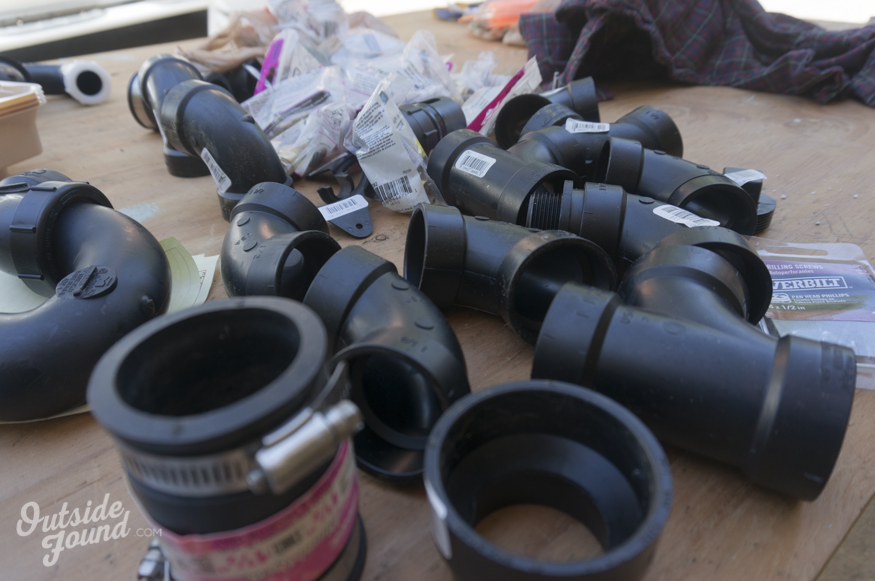 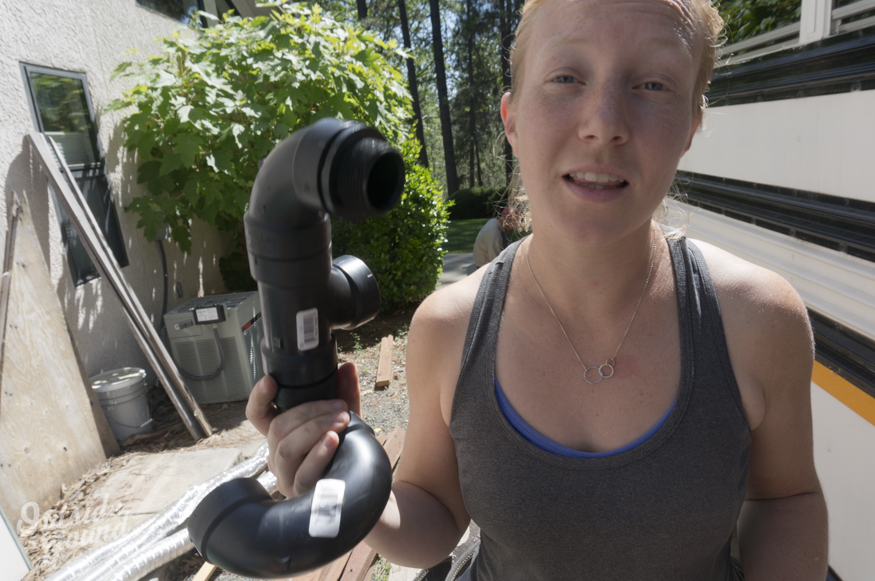 Byron is coming back out to help us finalize all of our electrical, plumbing, and propane lines and install our appliances later this week. Once we get that stuff done we’ll be racing to finish everything else, which includes: 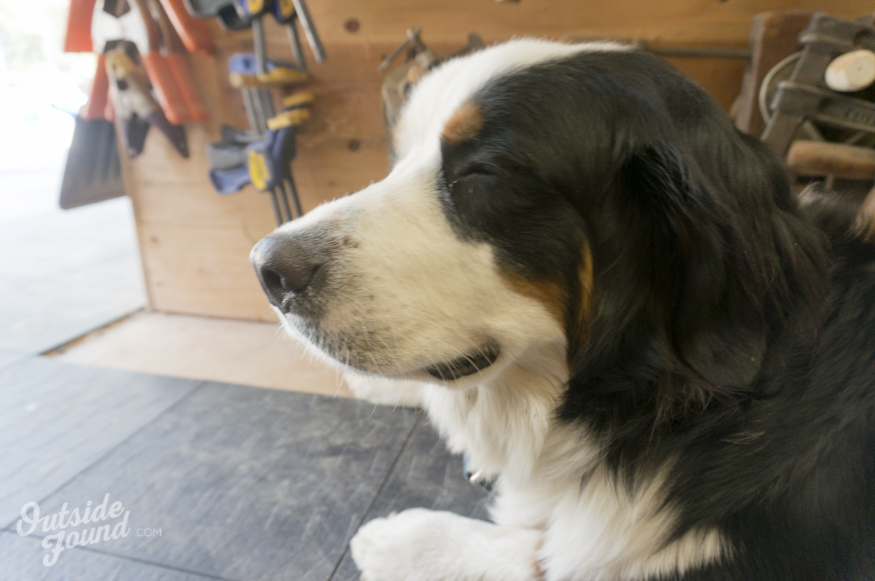 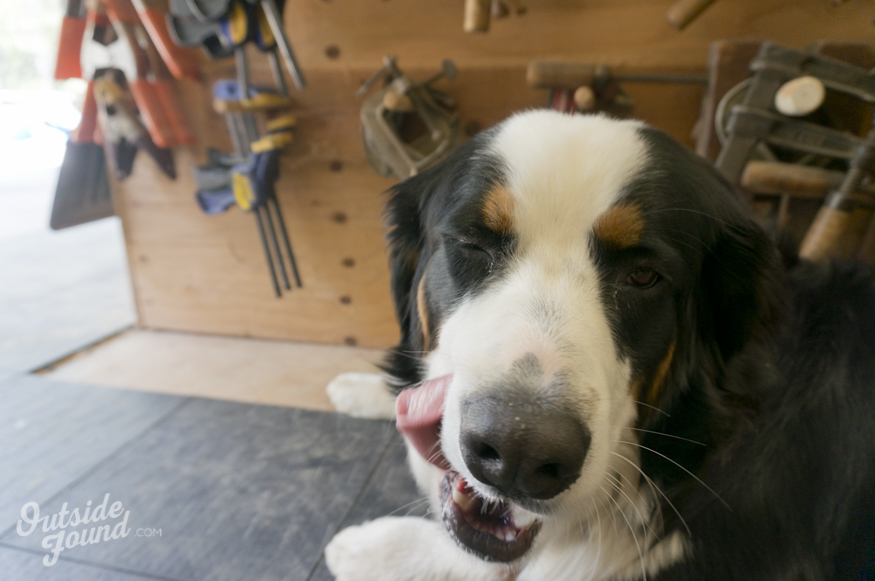 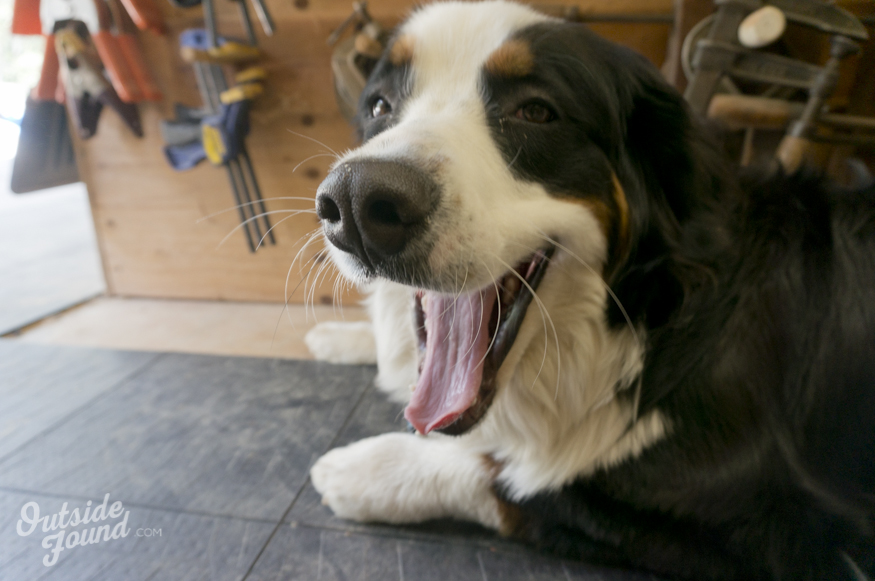