Welcome to the first entry in our trip journal! I’m writing this post from the bus couch on I5, just north of Redding. I still can’t believe that I’m sitting here right now. Just a few days ago we were preparing to give up our summer bus dreams for good, due to insurance issues. For whatever reason, the stars aligned in our favor on Thursday morning and everything came together quickly: the DMV retitled the bus as a motorhome, Good Sam gave us another shot at liability coverage, and our registration was successful. After three weeks of trying, it took less than 48 hours for everything to come together once we found the right button to push.

We are so thankful to all of you who wrote in with suggestions for our insurance problem. Not only was it helpful to get fresh perspectives on the issue, but hearing how invested all of you are in our success was really heartwarming. We couldn’t have done it without your support!

So, back to our first day on the road. Yesterday we realized that the bus needed a new low coolant sensor (it was constantly thinking we were out of coolant when we weren’t, and setting off an annoying alarm.) A bit of research showed that we had to replace the whole coolant tank, and the only one we could find was down in Sacramento… so our day of prepping for launch turned into a day of shopping in Sac instead, which pushed our prep to today instead.

When we woke up this morning we had a long list of things to accomplish before getting on the road. We needed to install the new coolant tank, finish packing the bus and gear garage, and clean the shop, shed, and driveway that we’d used to work on the bus.

I handled most of the packing and organizing while Will worked on installing the coolant tank. I’m proud (though not at all surprised) to say that he got it in on the first try. First bus repair, success!

We had everything squared away by 3pm and were ready to hit the road. Wanting to leave with a bang, Will and his dad Rob thought it would be a great idea to smash a bottle of champagne on the bumper. Will, worried that he might look lame on video if he wasn’t able to break the bottle, really wailed on the thing and ended up getting glass everywhere. We spent 30 seconds excited about champagne and 5 minutes cleaning up glass… but hey, the pictures are awesome! 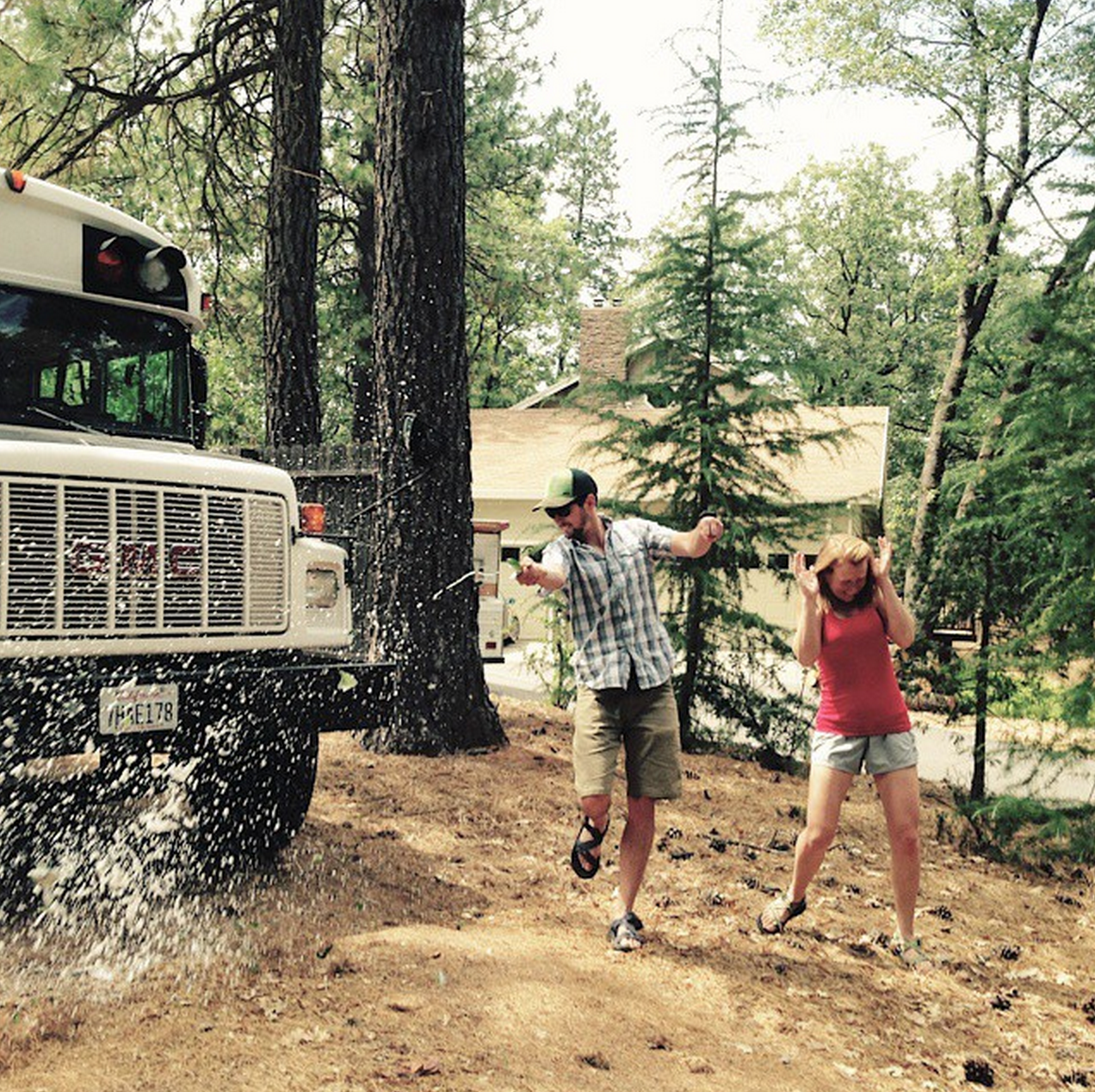 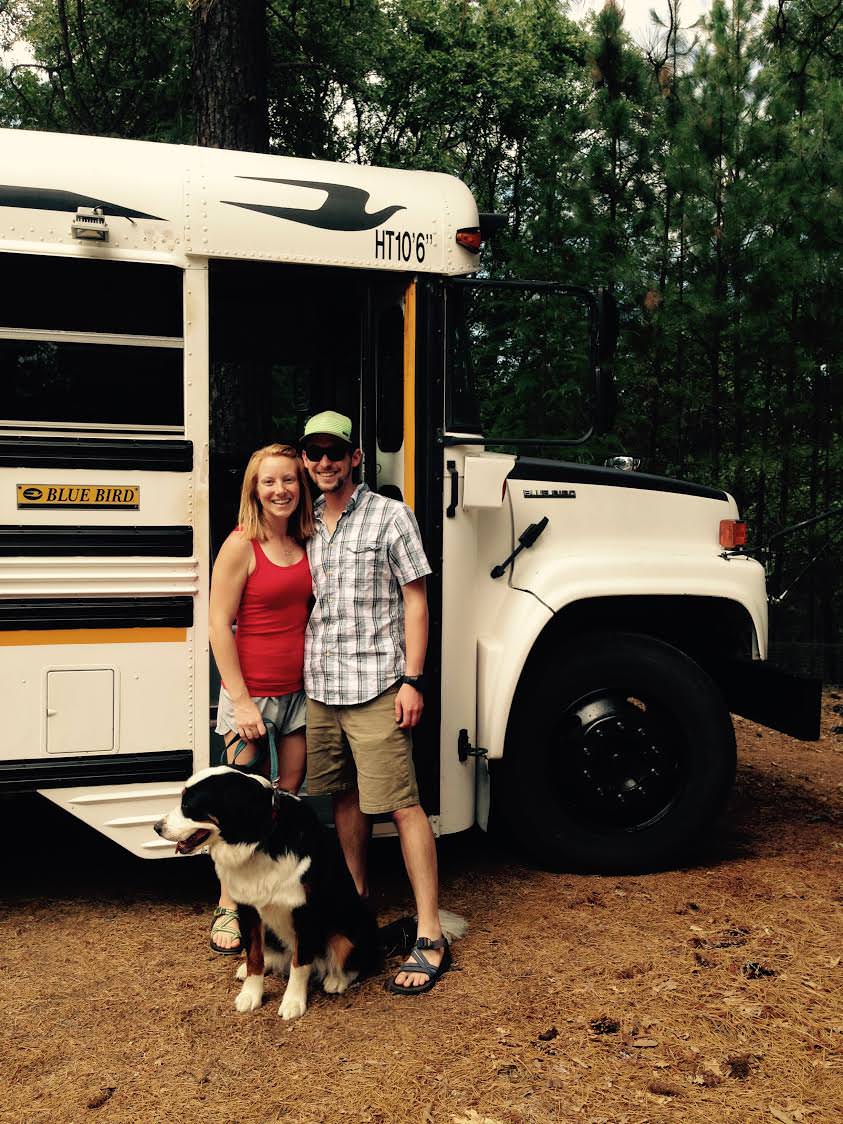 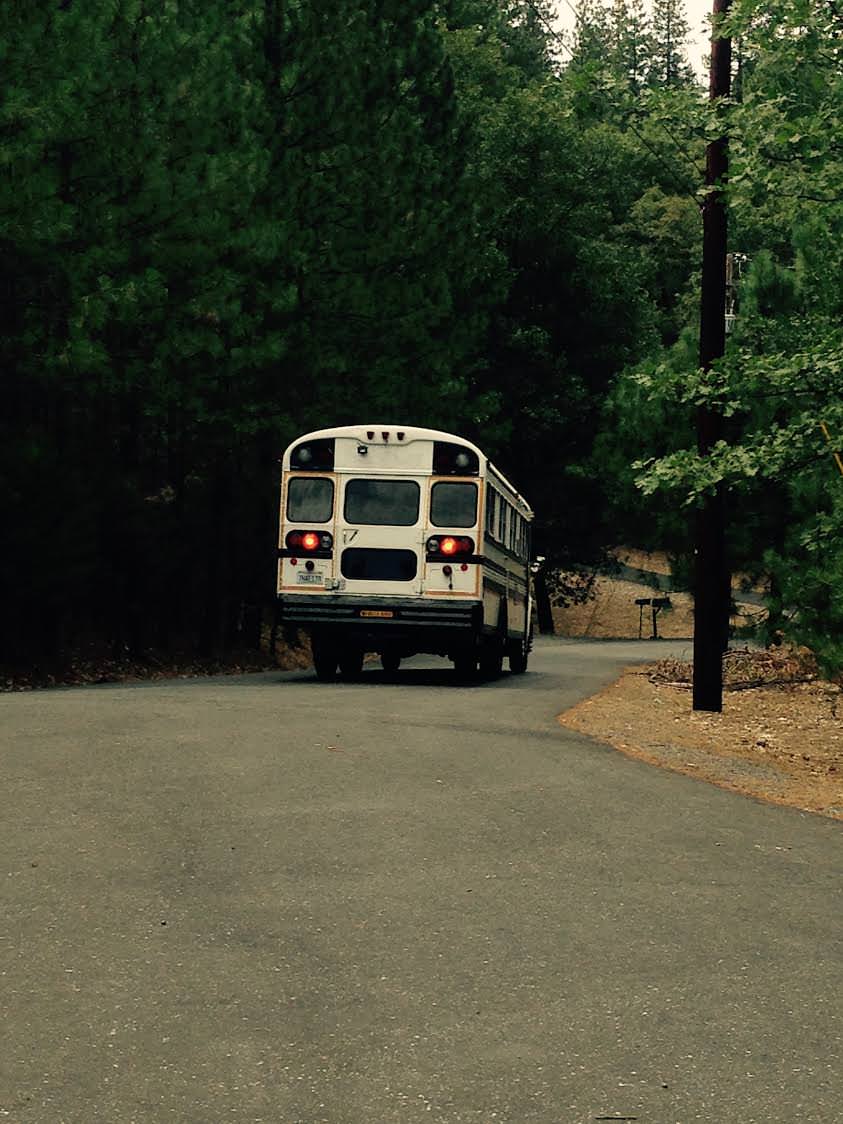 Our first few minutes on the road were surreal. The bus creaks like an old ship, which made me very nervous at first. We aren’t quite sure if it’s the wood or the foam, but either way we’re hoping it’ll die down as it wears in. Being in the bus is a totally different riding experience than being in a car or regular motorhome. The fishbowl style windows make it much easier to connect with the places we’re passing through: rather than seeing something streak by my single window, I get to check things out from all angles. 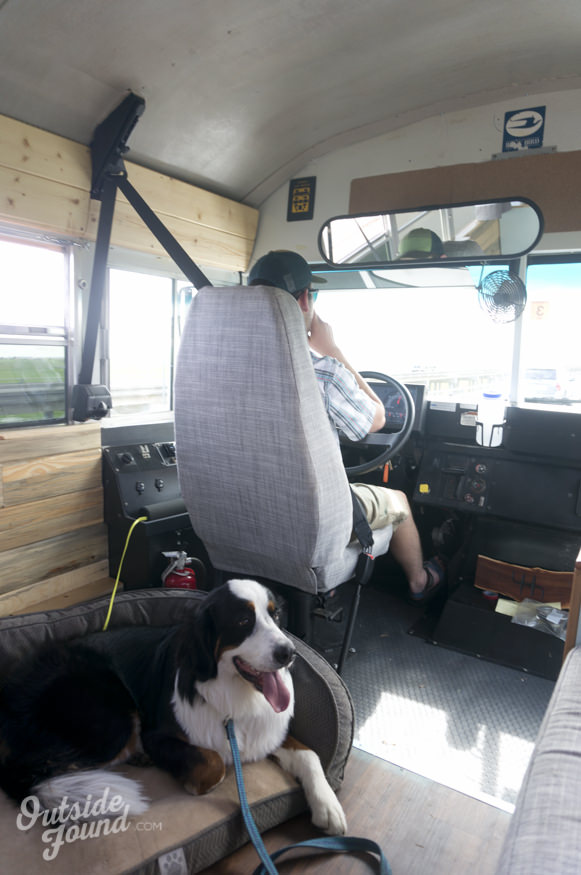 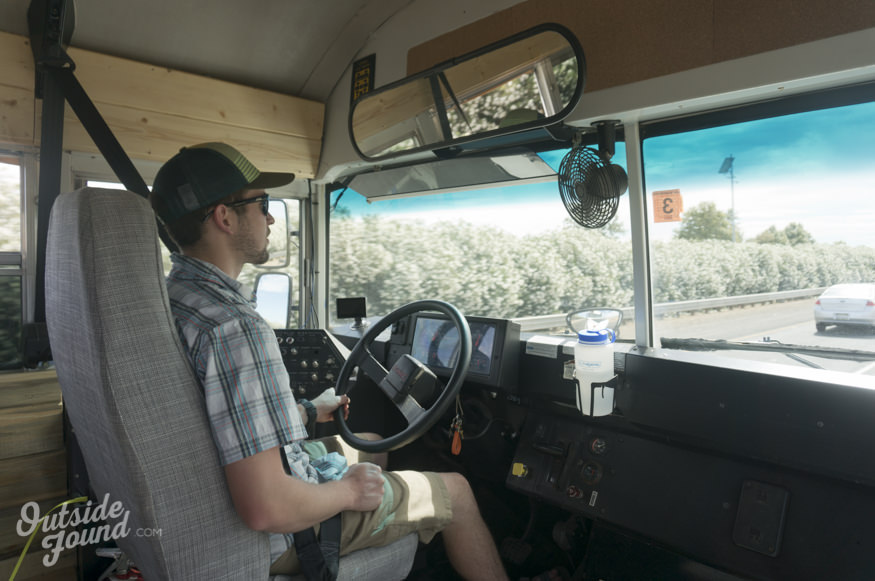 It’s hotter than hell in Sacramento these days, so we have a bunch of windows open to at least get some air circulation. I thought the heat would be unbearable, but it’s pretty tolerable so long as Hilde’s not drooling on you. 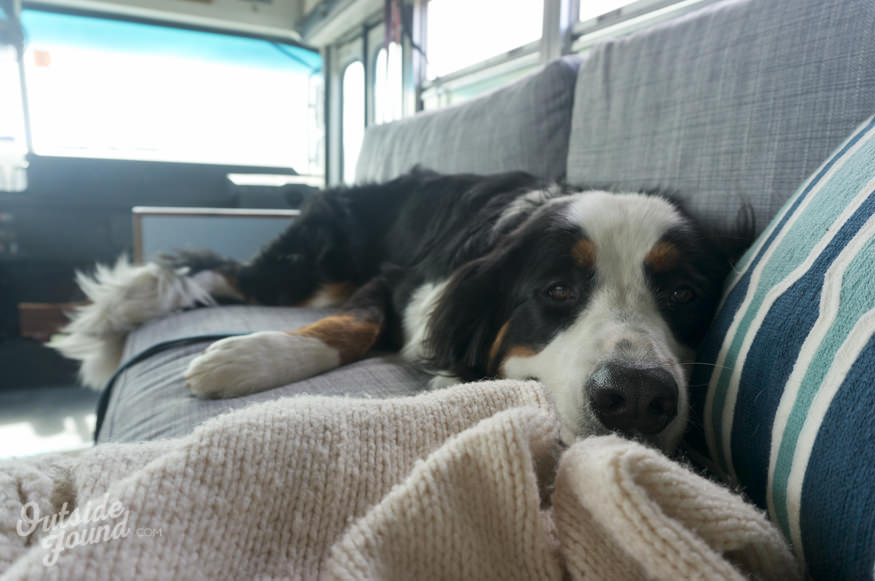 Speaking of Hilde, I think she likes the bus. So far her favorite place to ride is on the couch, with her head out the window. She does an adorable squinty thing with her eyes that I call the “freeway face.” If she’s not sticking her head out the window then she’s trying to sit as close to me as possible, which isn’t great in the heat. She’s not completely at home, but she’s also not trying to escape, so I’d call that a win.

My first experience driving the bus was both terrifying and uneventful. Will gave me a mini bus driver’s ed in a truck stop parking lot, and then I headed out on the open road. Everything is different, but once I got used to it was pretty reasonable. It’s definitely a vehicle that needs constant supervision – we won’t be driving this baby when we’re tired. 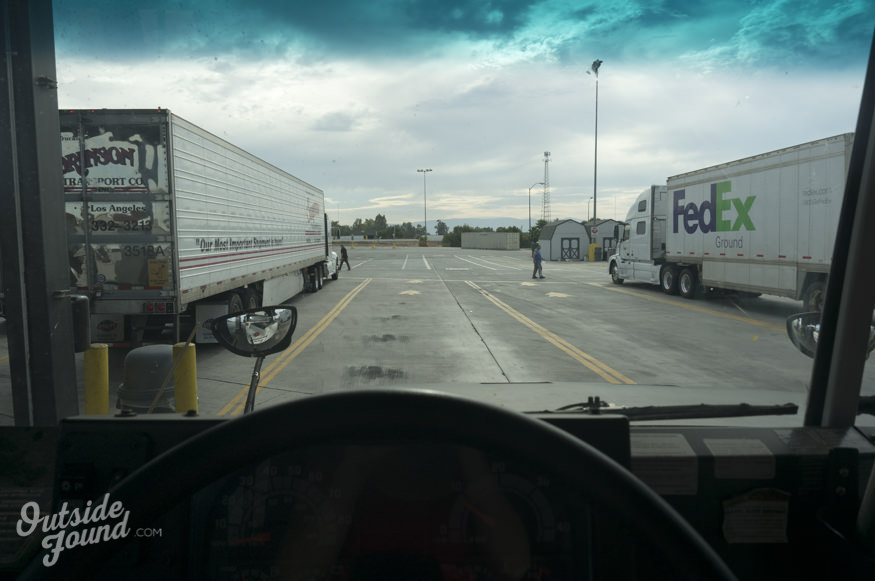 Our first stop was a Home Depot run. We had a few things to return from the build out, and Will wanted to replenish his toolbox for repairs we might need to do on the road. I wasn’t excited about the new Allen wrenches or toolbox, but being in a dog friendly, climate controlled environment was pretty nice.

We decided to order a pizza from the Papa Johns across the street and eat it in the bus, in the Home Depot parking lot. We’ve eaten a fair amount of parking lot meals, but this was by far the most comfortable… something about being at a table rather than a tailgate!

Overall, our first day on the bus has been awesome. As I write this we’re about to start climbing Siskiyou Pass. The sun has just set and, coincidentally, we’ve just noticed that the light bulb behind our engine heat gauge is burned out, so there isn’t a great way to monitor how hot we’re running. Luckily the outside temp has dropped significantly, so I think we’ll be OK. 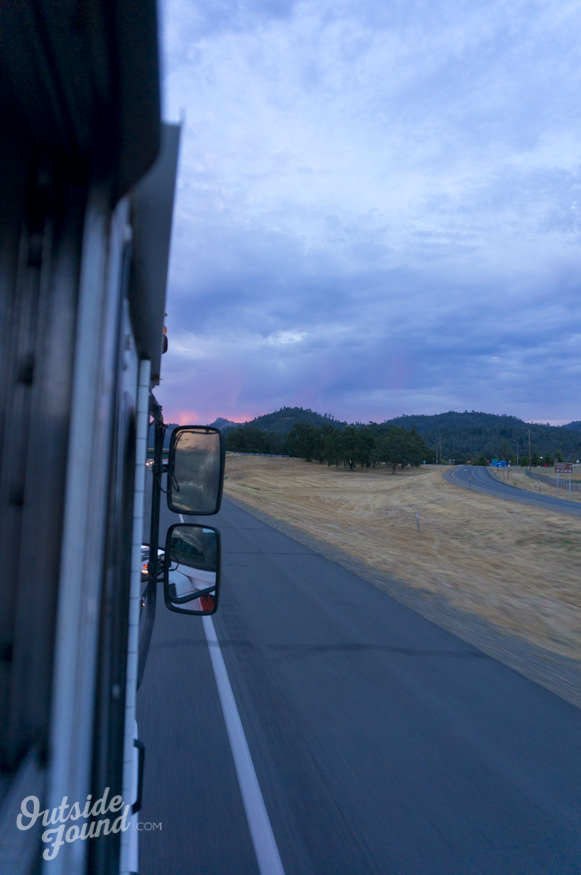 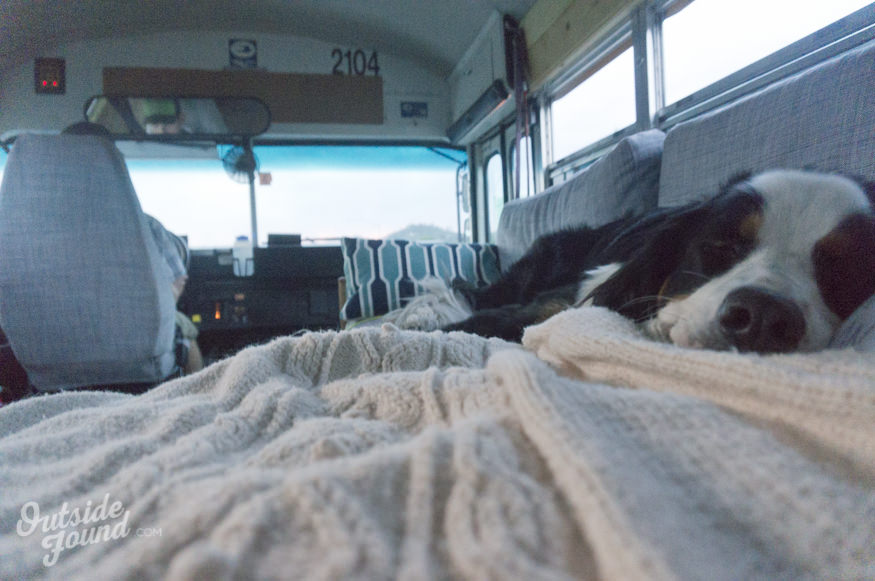 Tomorrow we’re planning on sprinting straight up to Hoodsport, where we’ll be meeting my family for a week of vacation. Check back soon for more updates! 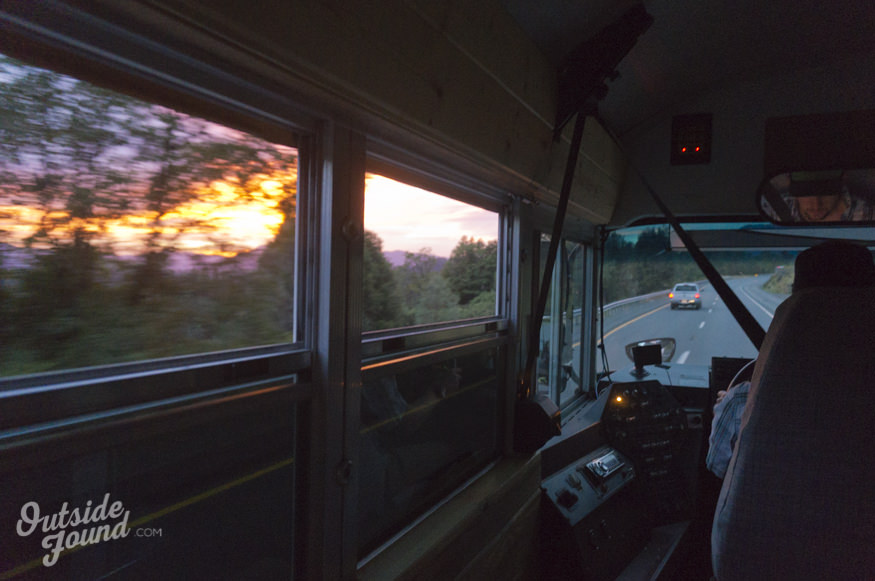 The West is Best