Will and I fell in love with mountain biking last summer when we were living in Boulder. His was love at first sight. I fell fast and hard too, but in a way that left my shins covered in pedal scars. Either way, mountain biking quickly became one of our favorite activities and is one of our top priorities for the summer. We’ve been very excited to try out the trails the PNW is famous for.

Our first stop, Port Angeles, had a solid presence on mtbproject.com, the website where we do most of our trail research. However, when we talked to the bike and outdoor shops in downtown Port Angeles, they weren’t really super knowledgeable about the local trail network… not a great sign.

We decided to go up anyway, just to see what we could see. To get to the trailhead we biked from the RV park down the highway, and then a mile or two up a fire road. The site was cool, it looked like they had had a big race there recently, but there was not a soul around! We checked our map and started climbing up another access road to try out one of the easier trails on the map, One Liner.

Our first lap on One Liner took a long time. Will smoked it, of course, but it took me a little longer. The trail was beautiful, but also steep, somewhat technical, and very loose: three things that aren’t incredibly daunting on their own, but can be sketchy when combined. I’m a cautious mountain biker, and this was my first time on a bike in almost six months, so I knew that I was going to be a little rusty.

On One Liner I did a lot of stopping, assessing, backing up, and re-trying things. I have no qualms with walking sections that are out of my reach, but this year I’m trying to give tough bits at least two goes before giving up. This philosophy is great for my mental game, but I forgot to tell Will about it and he ended up running up the trail after me because I was taking so long… whoops! 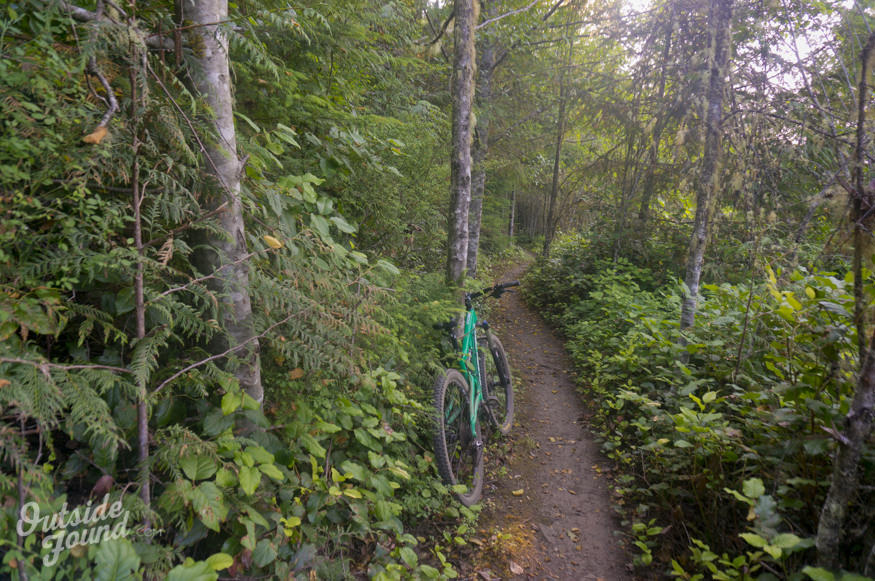 Our second lap on One Liner was much quicker, since I knew all of the tricky sections were within my ability. Conquering something you’re unsure of is a great feeling – such a natural high! We left feeling amazing and excited to have another go later in the week.

Our second trip to Dry Hill was even more incredible. First we took a different route from the RV park, which changed our warmup ride from a stressy sprint down the highway into a chatty stroll down a country road. With a stroke of luck we arrived at the lower gate right as the NW Cup organizer, Scott Turner, was passing through. He chatted with us for a few minutes about the area and eventually offered to give us a ride all the way to the top of the mountain. 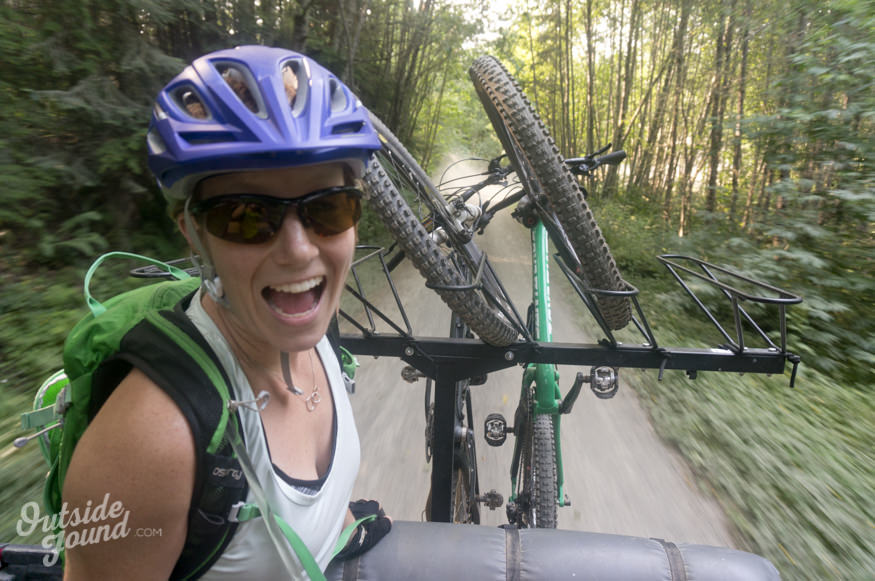 We were stoked! We hadn’t planned on riding all the way to the top, thinking it was just too much work when we didn’t really know the trails. On the way up Scott gave us some amazing advice – basically planning out the rest of our afternoon. We followed his itinerary to a T and couldn’t be happier. We rode trails that we probably wouldn’t have picked on our own, and had an absolute blast.

View from the top of the hill. There’s a big fire burning in British Columbia, so the visibility isn’t as great as it could be. 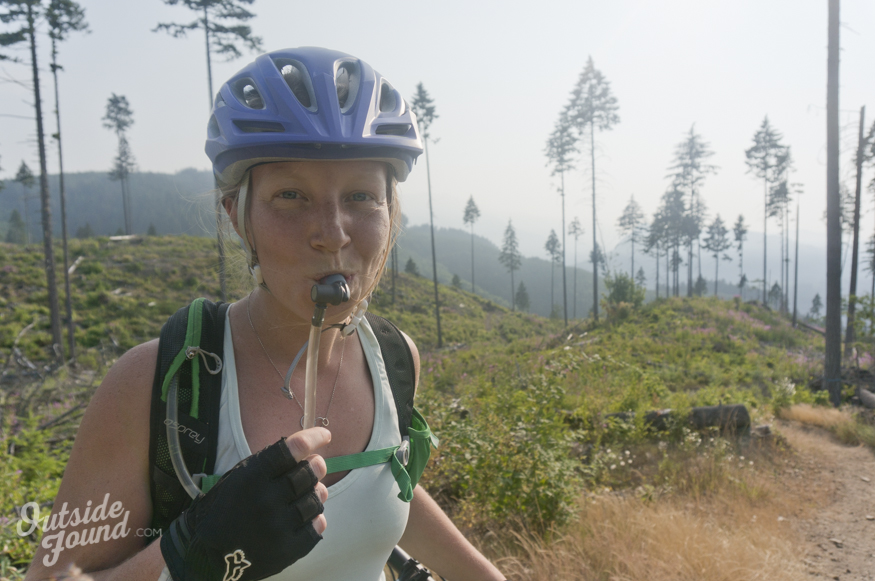 Recap of the trails we rode, if you’re interested…

W – Long, old school single track with some steap switchbacks and plenty of roots. Definitely feeling the calves burning by the end of this descent.

A – Looks daunting, but is super ride-able for an intermediate rider. Took me a second to get comfortable but once I knew what to expect I was sitting pretty.

W – Definitely the favorite ride of the Dry Hill tour. Well built, packed down, and very flowy. Wayne’s world features some good, steep technical sections as well as some very fun burms for tight turns into each section.

A – Steep! But amazing and smooth. Fun for both of us!

W – Tight turns through the trees at the top of Dry Hill. Not too steep, but lots of small drops over roots and through some loose dirt.

W – A continuation of Upper Scott’s Mom that breaks out into clear cut forest. Pretty exposed and the dryest part of the mountain. This trail was the closest thing to a cross country trail that we rode.

A – Loved this section! The views were amazing and the trail very kind.

W – Excellent section for a primer in table tops. Muffin top is wide and flowy and easy to have fun on during the first run through.

A – Scott warned us about a drop after the second table top on Muffin Top. I was looking out for it, but ended up going right over it! Drove into the bushes, but didn’t crash. The rest of Muffin Top was super fun.

W – Probably the most technical trail that we tried out a Dry Hill. Double Bypass is very similar to One Liner in the types of features (tight turns, root drops, loose dirt), with a little more pitch. I’d love to get to know this one a little bit more.

A – +1 to Will’s comments. This is on the higher end of steep + technical that I’ve done.

Scott also recommended that we check out the Adventure Route section of the Olympic Discovery Trail. We hadn’t planned on riding it because we didn’t really think it was a mountain bike trail, but I’m so happy we did! It was super mellow, but absolutely gorgeous. We got up early and rode it in the quintessential PNW mist, which made it feel that much more awesome. Unfortunately we didn’t get very far, because my chain broke around mile 3. We had a chain breaker but no pin to rejoin the links, so we ended up push-skating the bikes all the way home. 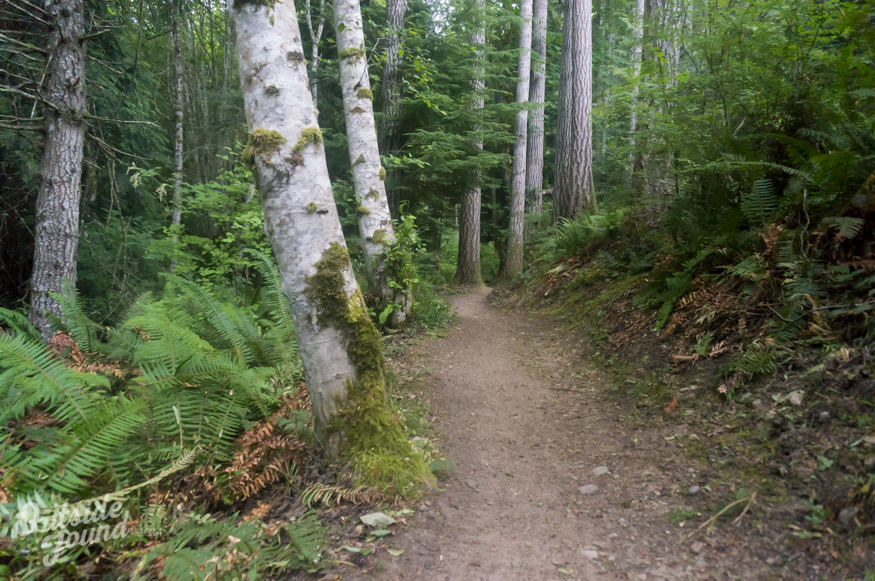 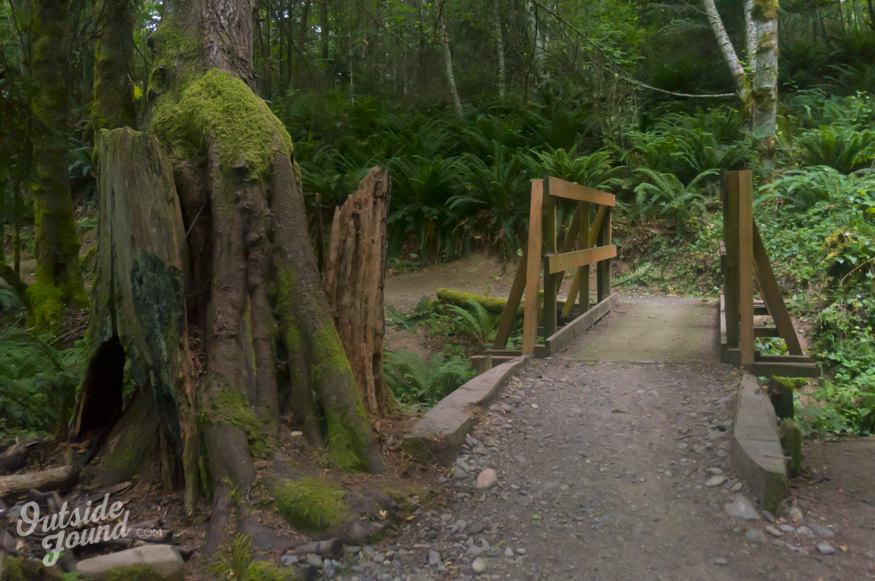 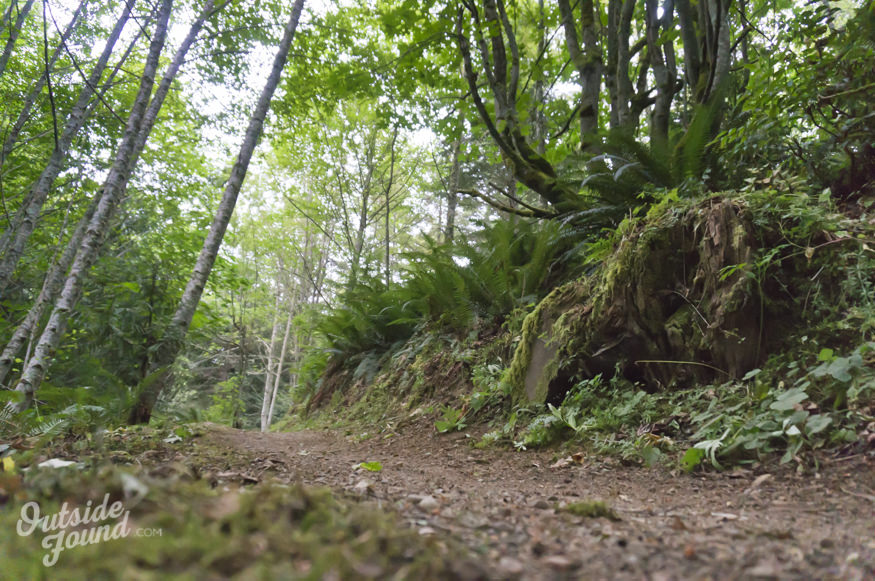 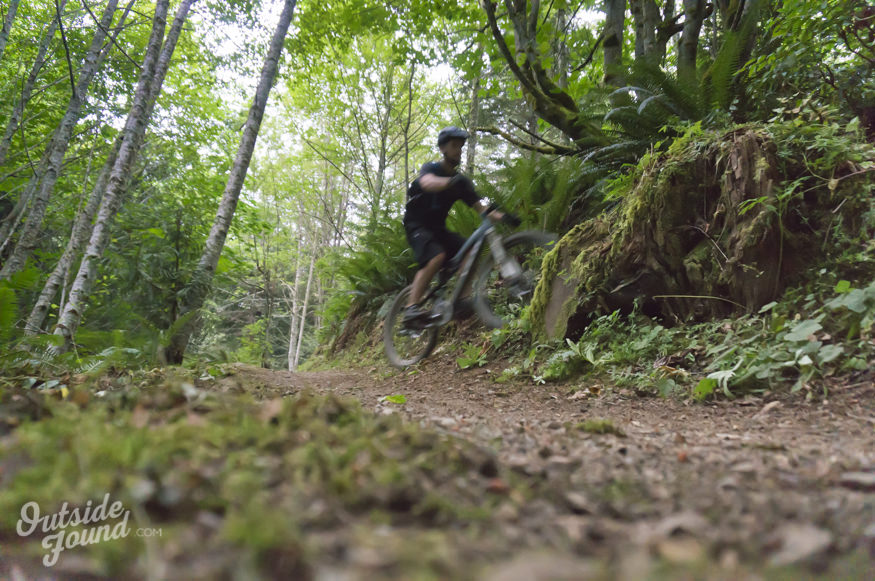 All in all, Port Angeles delivered! We were worried that the biking wouldn’t be as good as we’d hoped since the townspeople didn’t seem too into it, but Dry Hill was about as awesome as it gets… and we had the whole place to ourselves. Amazing! Definitely check it out if you get a chance!

Reader Questions: What’s it like to live with a composting toilet?