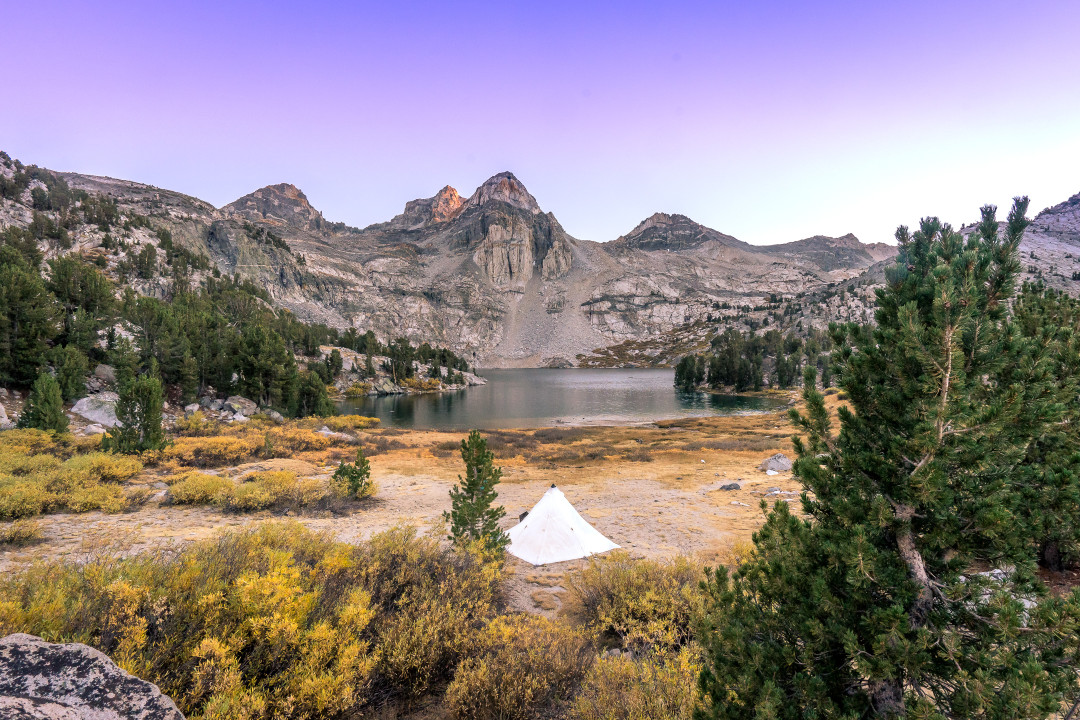 After a solid night’s sleep, we woke up to a chilly morning overlooking the lake near Shepherd Pass. To save some time in the mornings and avoid prolonging the cold, we planned to skip warm breakfasts and start hiking immediately. 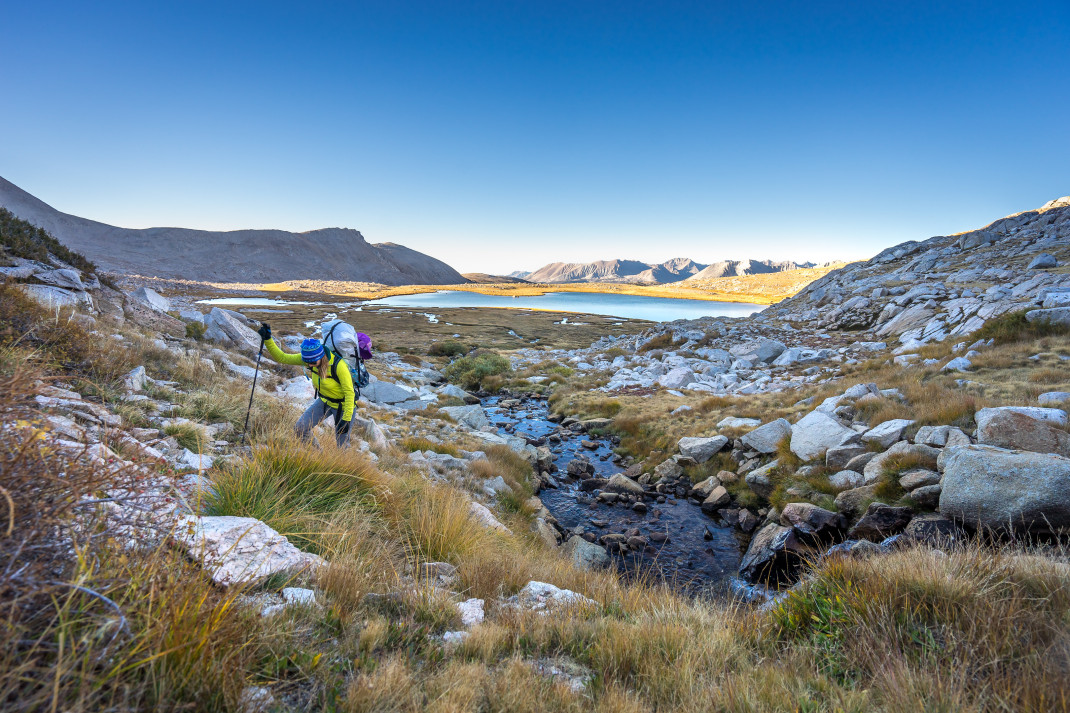 Hiking up towards the JMT from our lake camp. Tyndall Creek drainage in the background.

Bundled up in all of our warm layers, we packed up camp and hit the trail. Well, not really “trail” at this point, we started heading in the direction of the trail. To cut off some unnecessary mileage we decided to continue our cross country route and meet up with the trail west of where we were camped but north of Tyndall Creek in the valley down below. 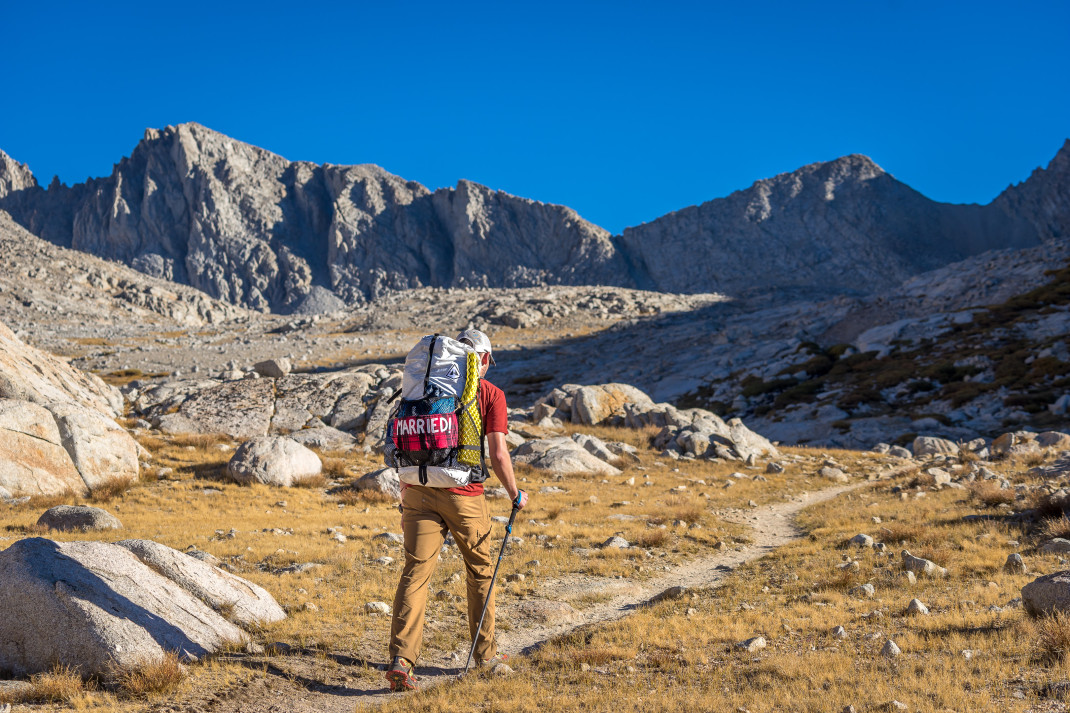 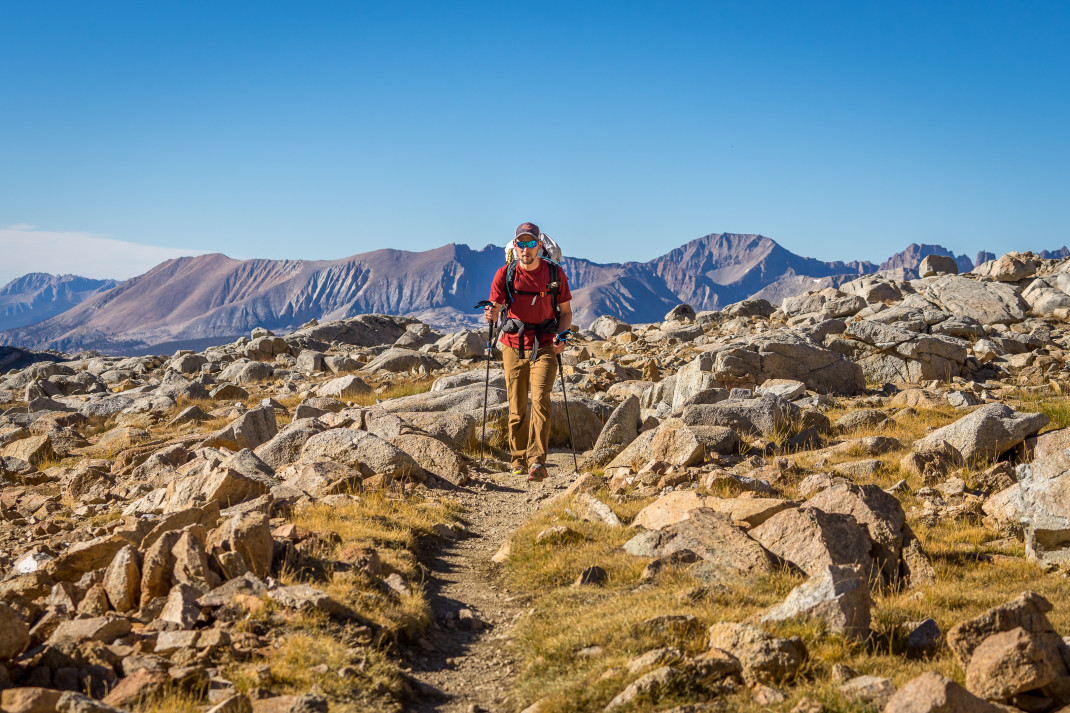 An hour later we were finally on the JMT. The sun was up and we were warm for the first time today. We changed into our cooler hiking clothes for the day and pushed on towards Forester Pass. Forester Pass is the highest pass on the trail and is absolutely remarkable in the trail building that went into making it passable for pack animals. 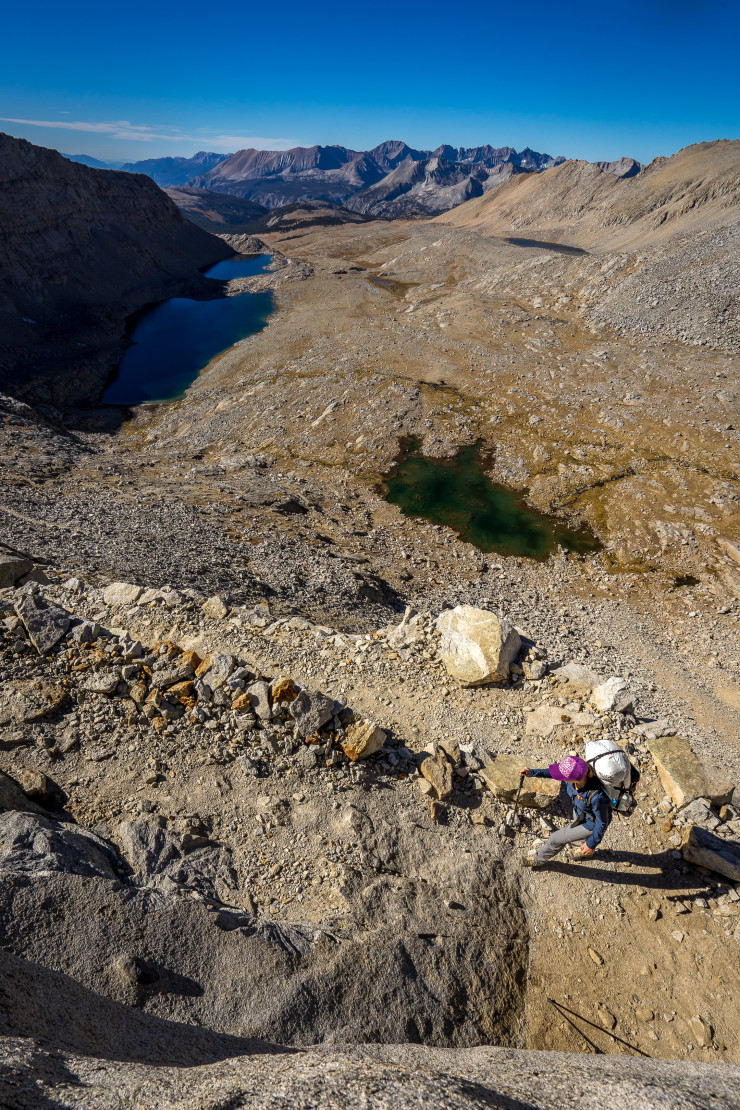 Building a trail by hand up this slope is a truly incredible feat! 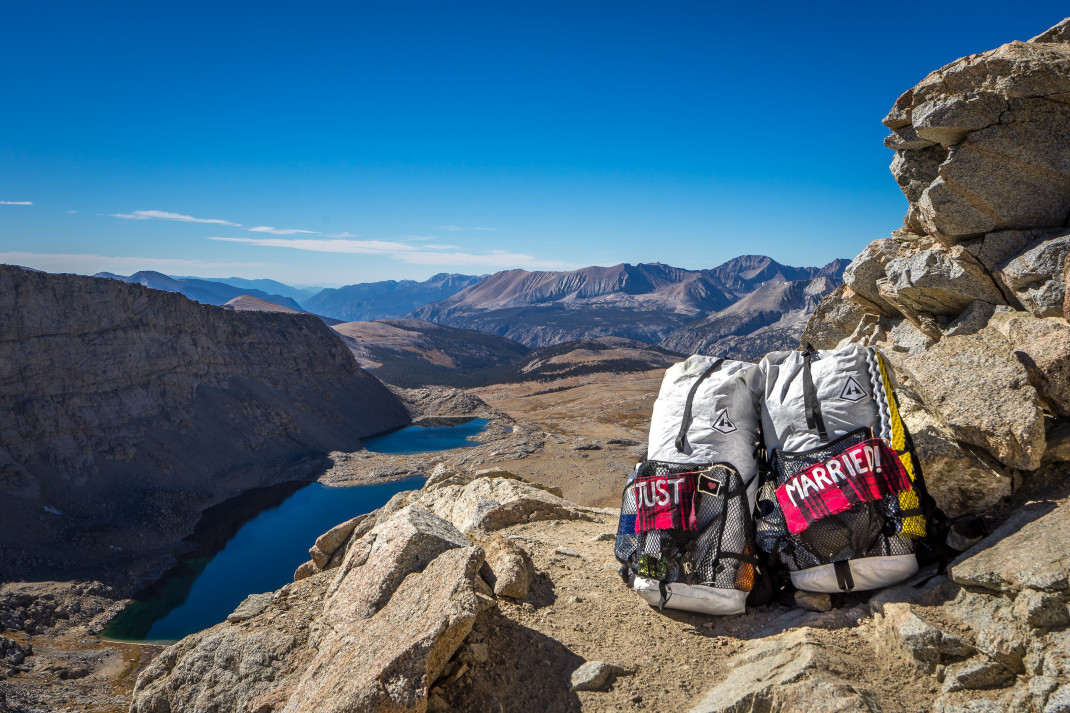 Looking back towards the south from the top of Forester Pass.

We made good time to the top of the pass and enjoyed a cup of coffee and a bagel with some Justin’s peanut butter for breakfast. During breakfast we encountered our first group of JMT hikers. They were all about 20 days into their trip and getting pretty near the southern terminus of the trail at Mt. Whitney. They definitely seemed like they were looking forward to being done! 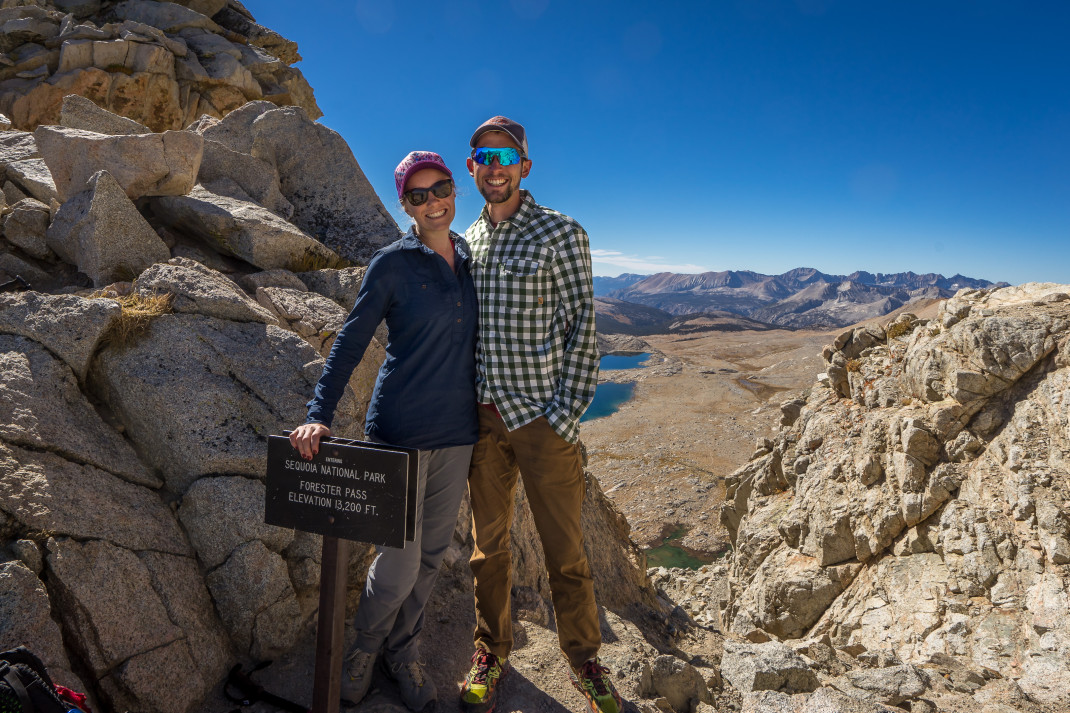 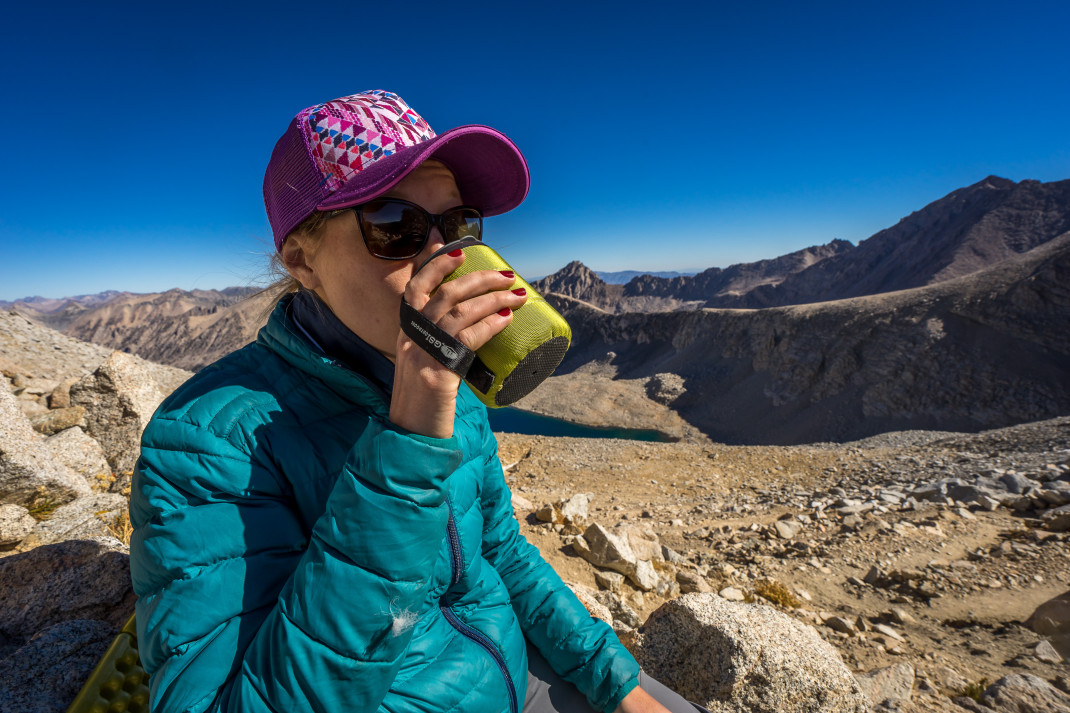 Enjoying some coffee on the pass. 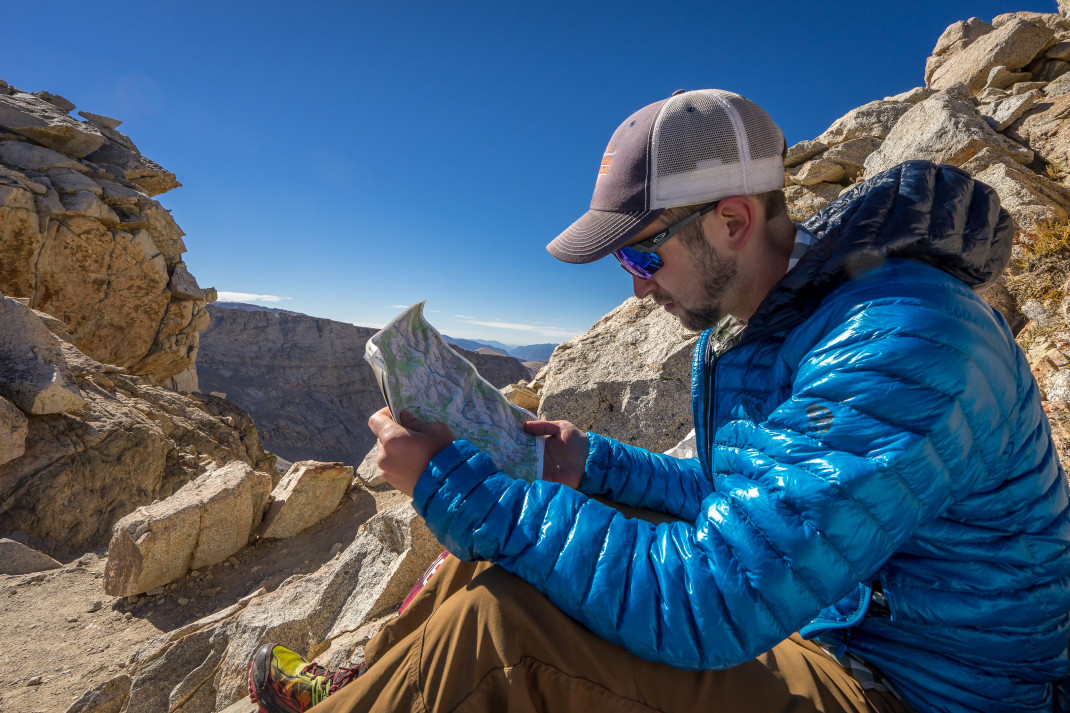 Reviewing the plan for the day from pass 1 of 2.

We hiked off Forester late AM and made our way down into Vidette Meadows, passing a few more southbound hikers along the way. It was an easy descent and hike through the valley but took longer than expected. We weren’t keeping up with the same average speed that we had counted on, even on these long flat sections. 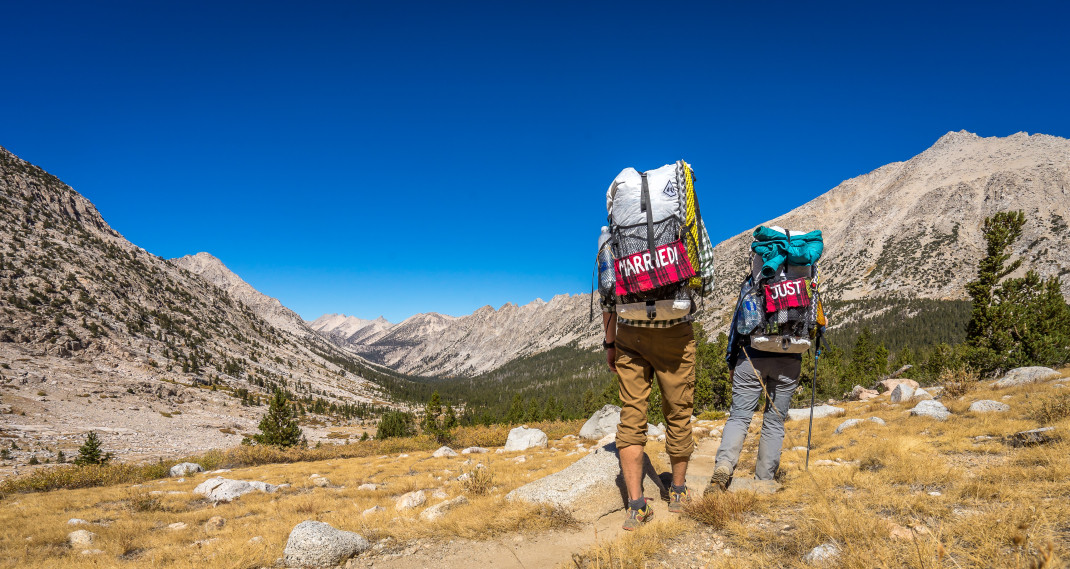 Headed down into Vidette Meadow. We have to hike this entire valley, up one more pass, and down to the other side today.

We made it to the end of the valley and had a little pity party knowing how much more we had to do today and wondering if we could put up tomorrow’s miles when the time came. After some food and a little pack reorganizing we were back on the trail and feeling much better. – Will’s journal, Day 2

One more pass to go for the day. We rallied hard after our snack break and blasted through the Kearsarge Pass trail junction as we headed toward Glen Pass. In just one day today we traveled the same distance that Alyssa and I had covered in 3 days together in 2013. The mileage was adding up! 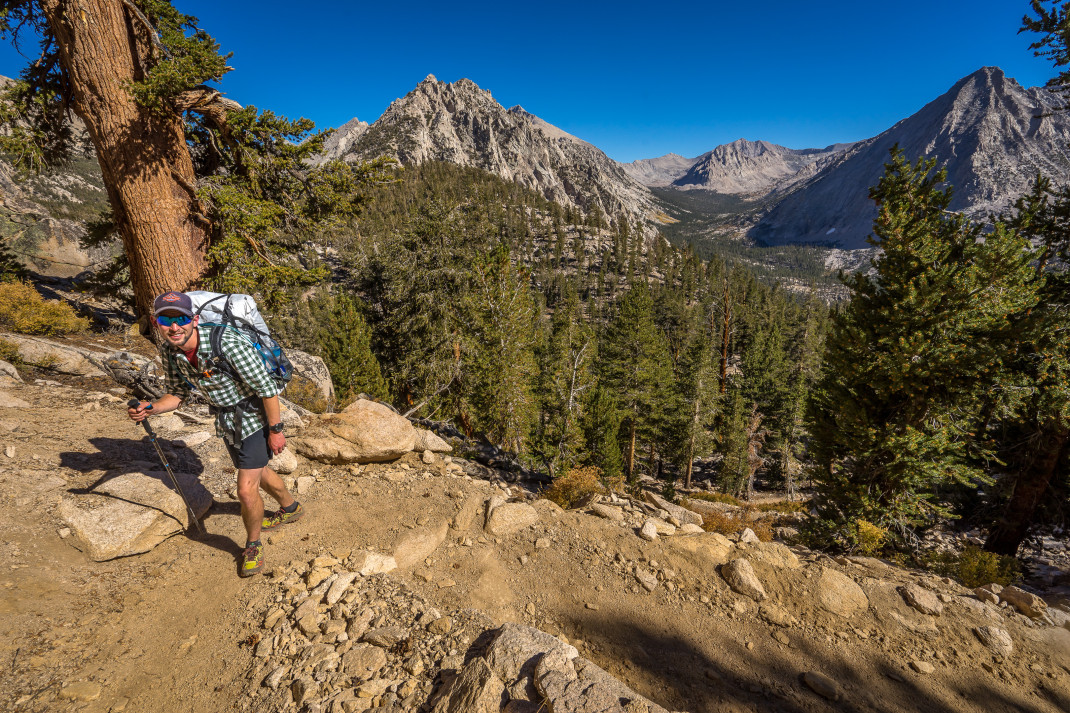 Feeling better after a snack. We just covered this whole valley behind us! 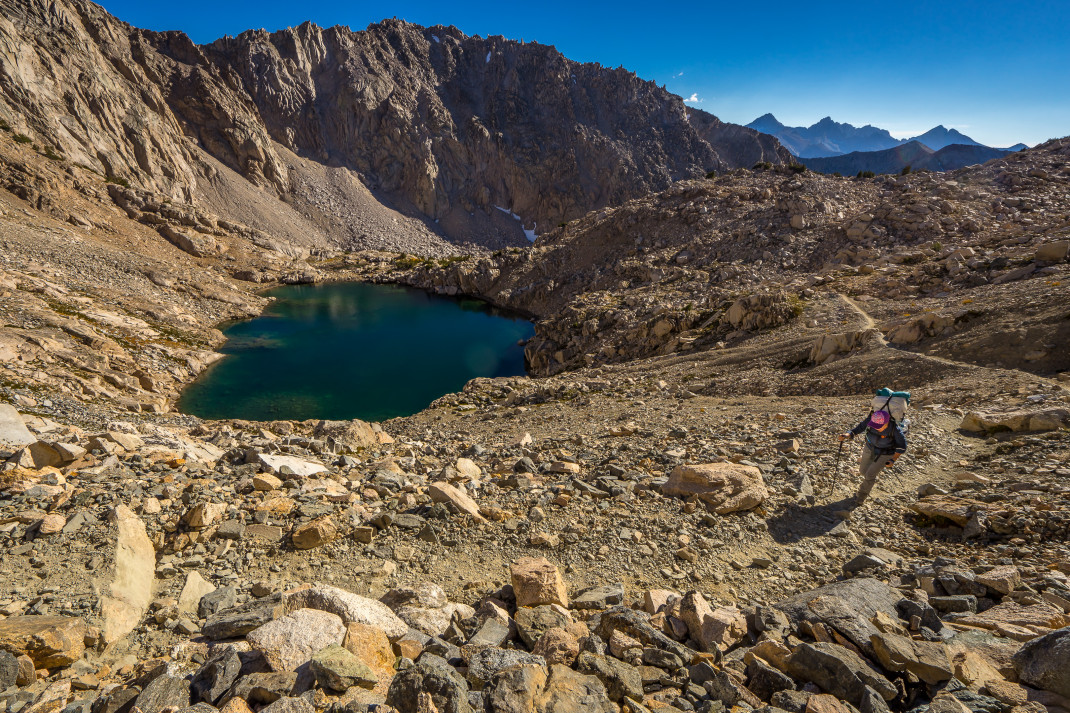 Last push up to the top of Glen Pass!

The climb up to Glen Pass proved to be shorter than Forester. When we crested the top we were awarded wide open views of the Rae Lakes basin below. Now this was the John Muir Trail! 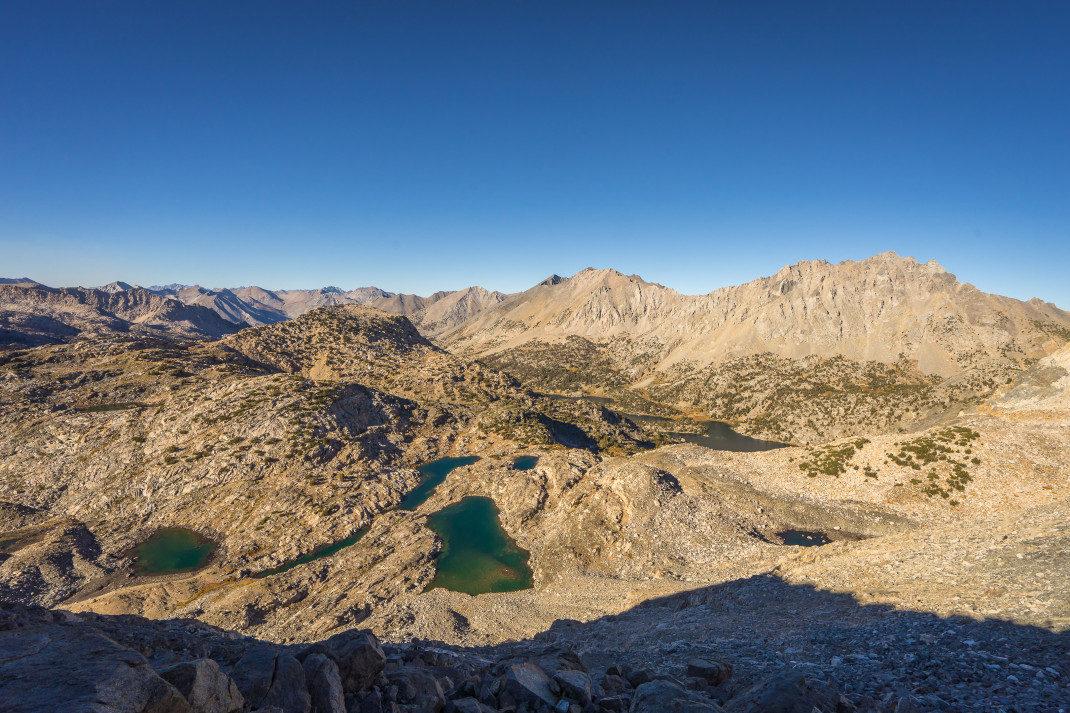 Looking down on Rae Lakes (middle right in the distance) from Glen Pass. Almost done! 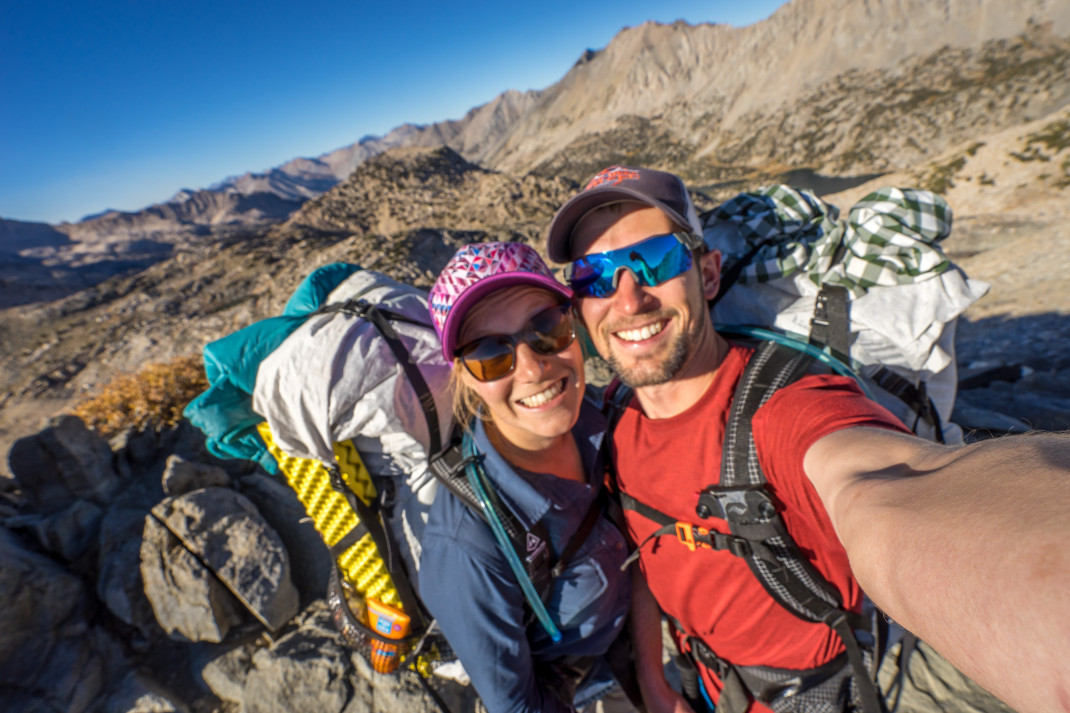 Third pass of the trip! A little out of focus…

We made a quick descent down to Rae Lakes enjoying some incredible light as the sun neared the horizon. 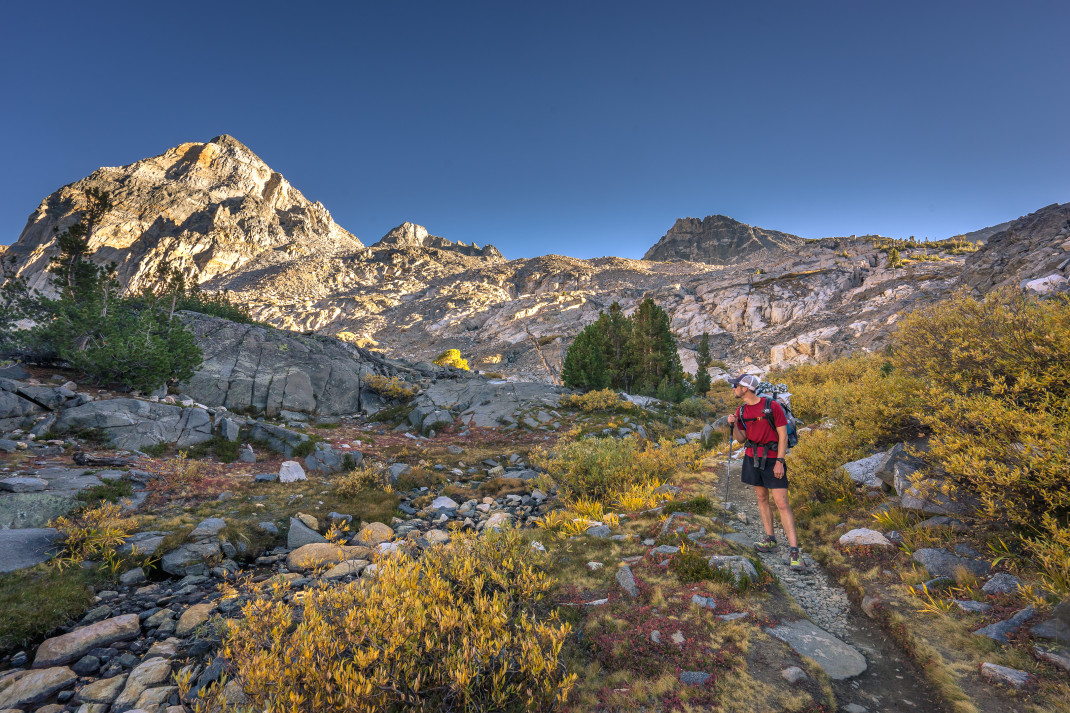 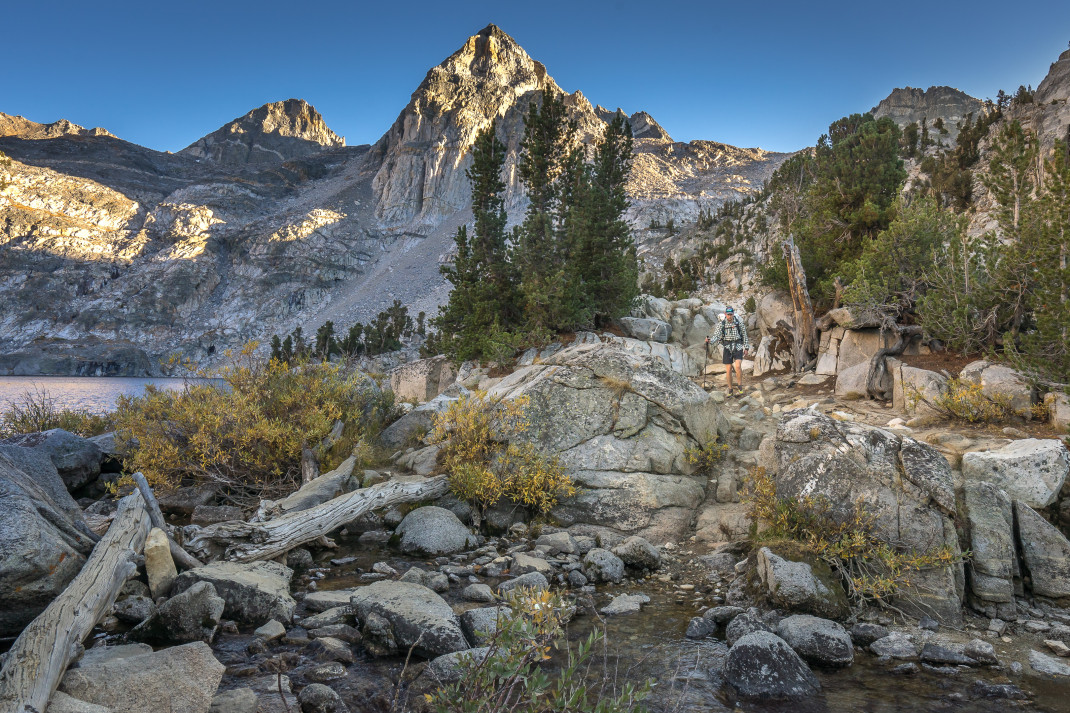 We set up camp between the two southernmost lakes as the sun set. Today was truly a sunup to sunset hike and we were worked. We found a nice rock by the lake to eat on our dinner on and were treated to another amazing show of alpenglow before the last light of the day finally disappeared. 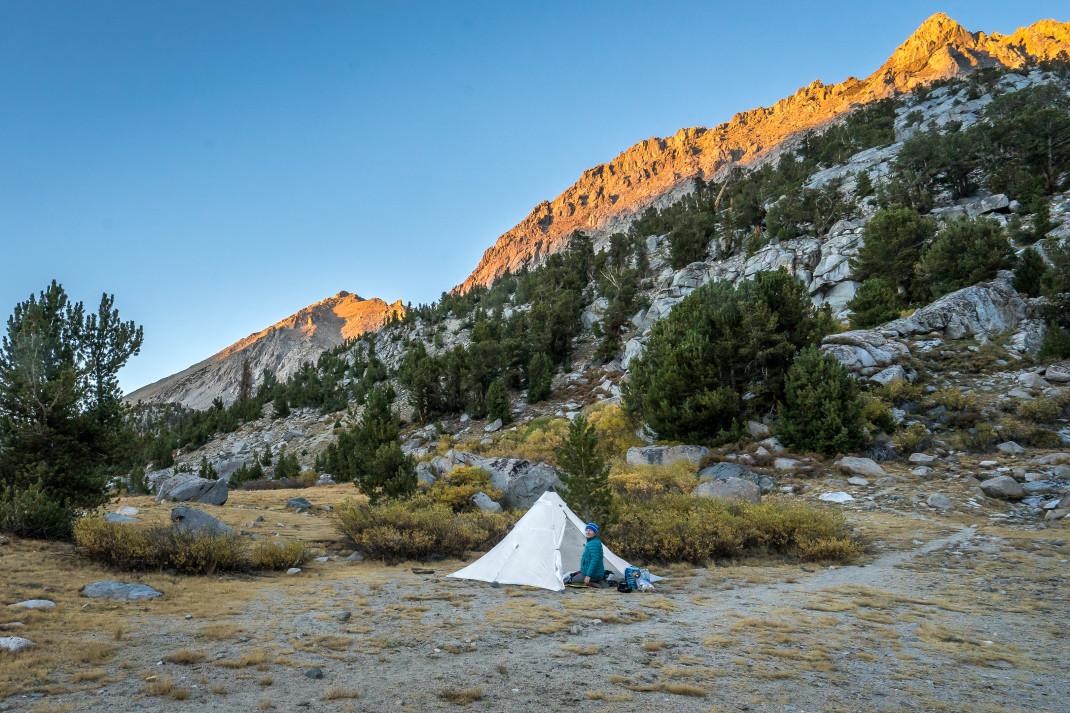 Setting up camp at Rae Lakes. 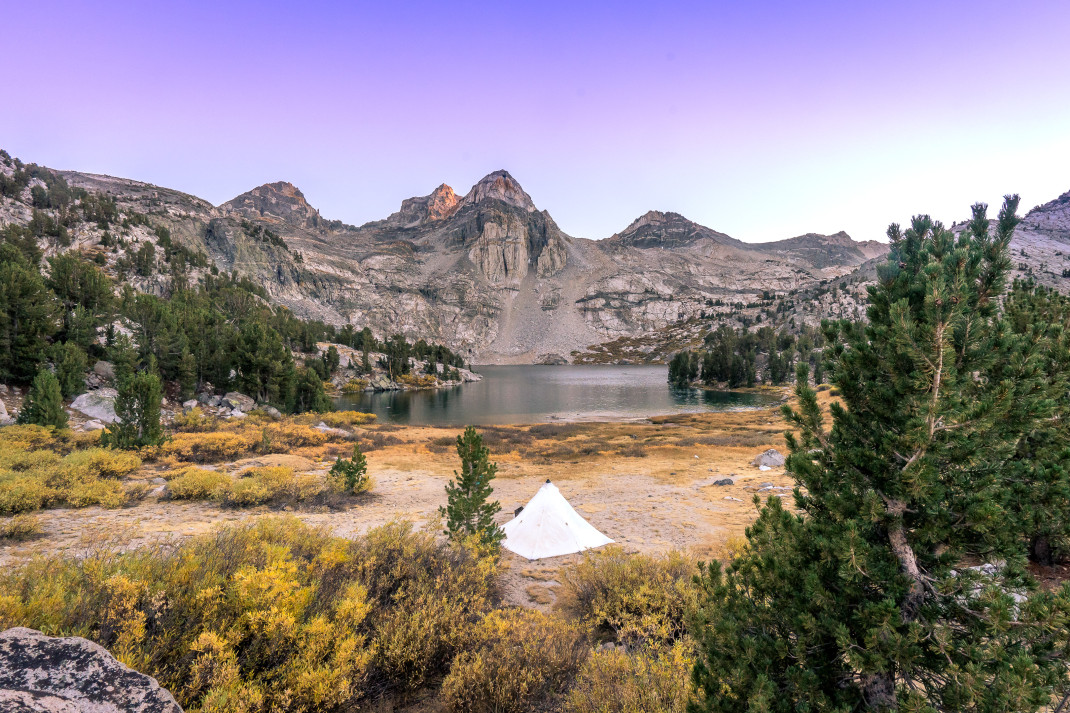 So far the trail has been amazing. People get really excited when they see our “Just Married” signs and are generally very friendly. We have yet to encounter another northbound JMT hiker but that might change as we get closer to Yosemite.

Right now Alyssa and I are both a little worried about making our miles. We are tired and sore and tomorrow will be a bigger day than we have seen yet. I think we’ll be able to push through it as long as we can avoid injury or other delays but the harder we push the more likely that becomes. One key focus that we noticed today is that we need to stay on top of our nutrition and keep those calories coming! – Will’s journal, Day 2

We hit the hay right after dinner, totally beat. A voice in my head was really pushing me to take advantage of the scenery here so I set my alarm for midnight to get up and take a few star shots… 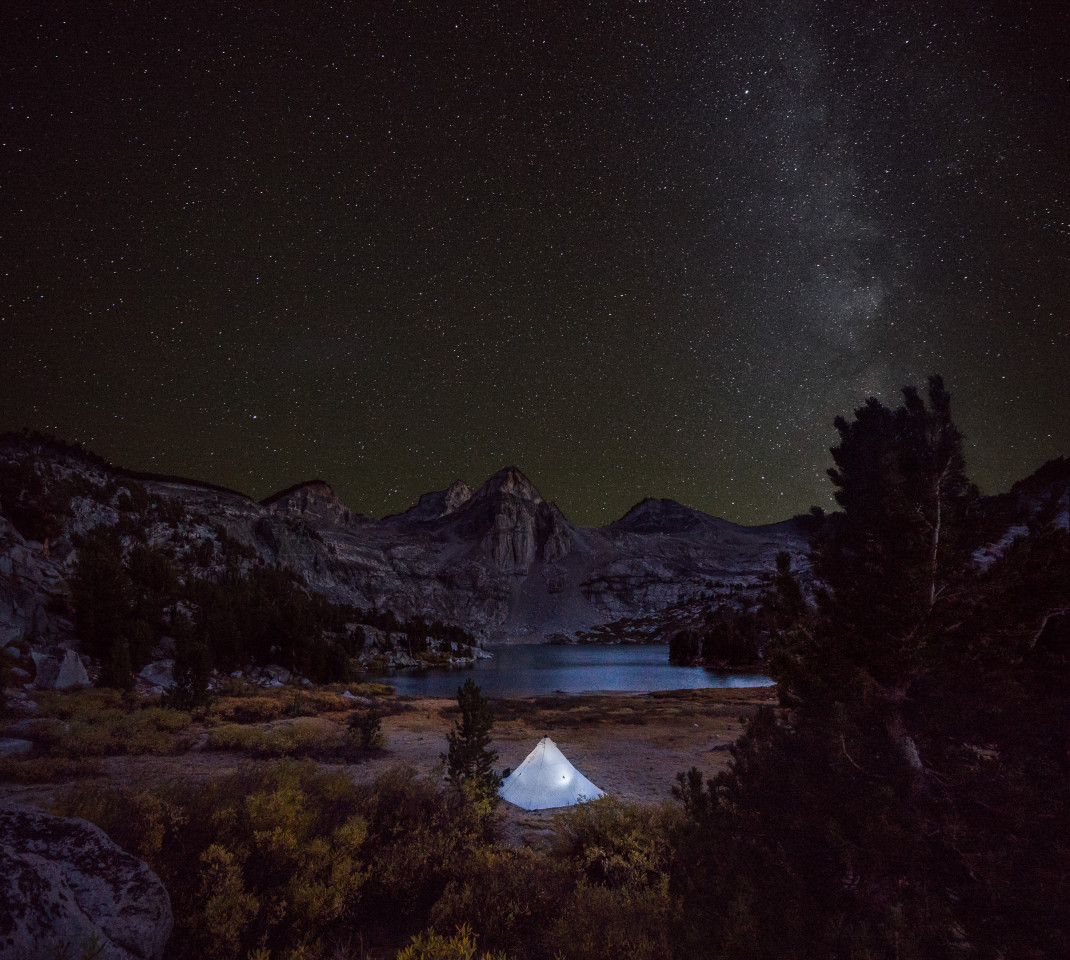 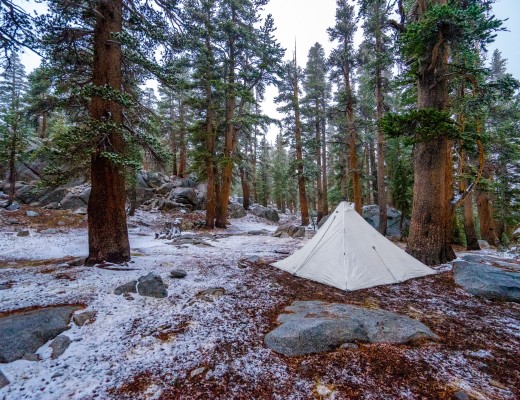