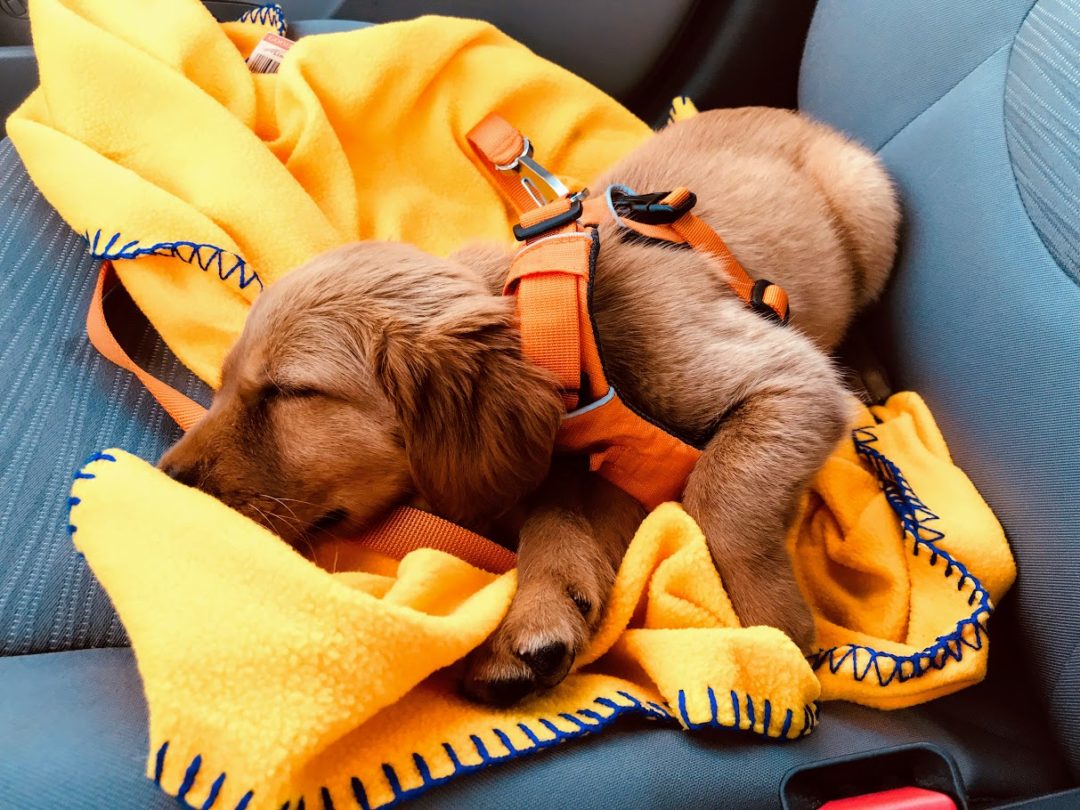 Meet Rally, the newest member of the Hitchcock team. She’s a 9 week old Golden Retriever puppy who joins us all the way from Mexico, New York. As often happens in our life, I am a little bit surprised to be writing this right now. Though I’ve always thought it would be neat to train a working dog, we weren’t planning on getting another dog this year. But… as I started to get more involved with Western Montana Search Dogs I realized what a wonderful opportunity I had to learn from and train with some of the best wilderness search dog handlers in the country. It takes roughly two years to get a dog ready to work actual searches, so I figured if it was something I was interested in, I had better get a move on.

We’re about a week in with little Rally gal and so far she is an absolute joy. Read on for more details on bringing Rally home, and stay tuned for lots of info on raising her up. 🙂 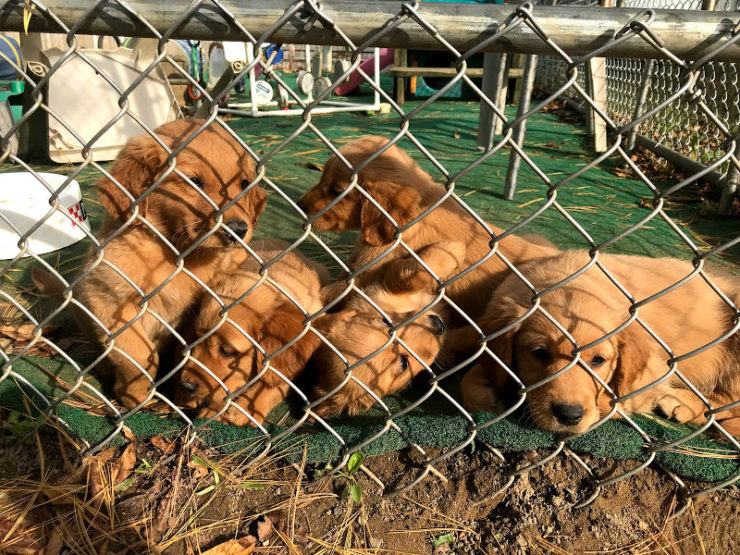 Rally with her sisters and brothers for the last time. This was quite the lively crew!

Why did you go all the way to New York? Aren’t there Golden Retrievers in Montana?

Yes! There are a ton of Goldens in Montana, but none that fit my specific requirements at this time. Rally comes from a line of accomplished hunting dogs that has also produced many successful search and rescue dogs. It’s important that SAR dogs have a very specific temperament, so I wanted to make sure that I was pulling from a line that has proven that they can do the job. I also wanted to work with a breeder who was passionate and engaged with her dogs, and could help me determine which puppy within the litter would be a good fit for me. The breeder, Carol, watched and tested the puppies carefully over several weeks, which was very helpful when it came time to choose. I know she will be a lifelong resource I can turn to if I ever need help.

How was the trip?

Flying with Rally was a big question mark – I had no idea how she would take it! Turns out that she was well prepared for air travel and I needn’t have worried. Preparation for flying started weeks beforehand when I sent Rally’s airplane carrier out to Carol, her breeder. Carol did a great job getting all of the puppies in and out of the carrier often, so that they had exposure to being enclosed. This had the added bonus of making the carrier a familiar element that smelled like home, which is very comforting to a lonely puppy! 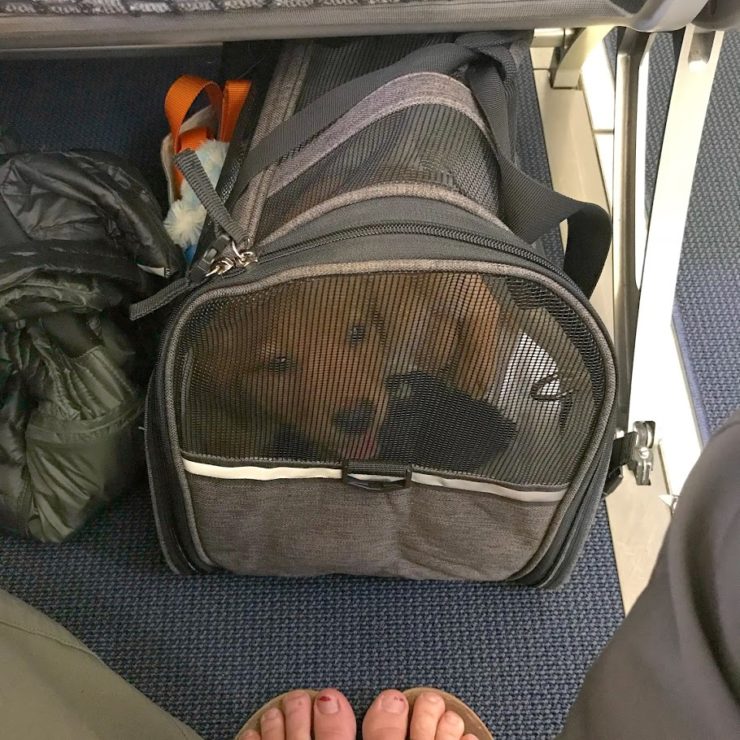 Happy as a clam in her little pet carrier.

We had two flights with a layover in Chicago, totaling about 12 hours of travel time. We arrived at the Syracuse airport two and a half hours before our flight to give extra time to get through security. They gave us a little extra attention (swabbed my hands and swabbed the bag of dog food in my backpack) but we made it through with very little fuss. Once in, I got Rally out and entertained her until we boarded so that she would sleep during the flight. The first leg went off without a hitch. The man I was sitting next to didn’t even know I had a dog, she was so quiet!

After that, everything continued to proceed as planned. We had a potty and play break in Chicago, and enjoyed our second flight just as easily as the first. We arrived in Bozeman exhausted after a long day of travel, but so, so in love!

How is Hilde adjusting?

As expected, Hilde is experiencing a bit of turbulence in her life right now. She is definitely a dog-dog, but she has never had to deal with an intruder coming in and staying for good. The first few days were a little bit rocky but her ice is cracking and she is starting to warm up to the little one, as expected… who can resist that little face?!

This is a pretty good representation of the Hilde / Rally dynamic right now. Hilde is trying her best, but she’s so big! Don’t worry – these leaves were deep and Rally was unharmed. 🙂

Right now we are doing a lot of proactive management of space and resources so that nobody gets jealous. Hilde gets plenty of one-on-one time in the form of morning runs, solo playdates with her favorite people and dogs, and nosework classes. During mealtimes we keep everybody separate so that neither need worry the other will steal her food. The couch and bed are fair game for now, but I imagine we’ll need to start regulating that as there just won’t be enough room for two dogs and two people! 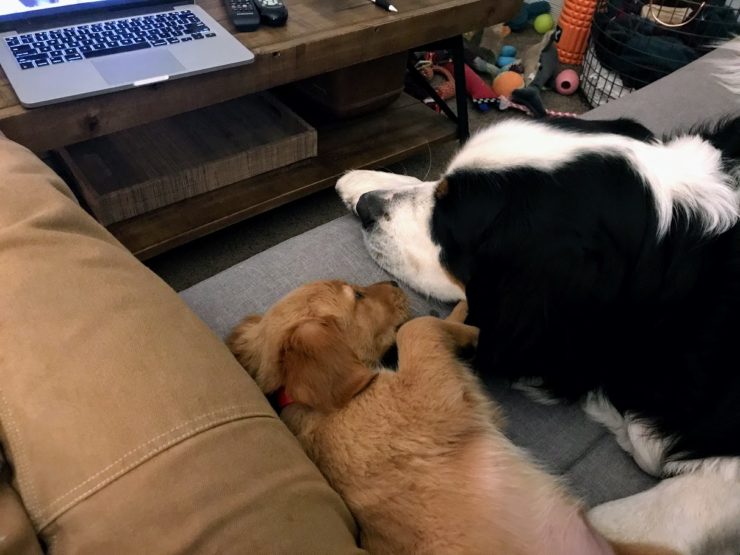 When does training start?

We’ve already begun! Rally has already attended several SAR team trainings where she has worked her first cadaver and live find problems. She’s had exposure to a helicopter landing and taking off as well as lots of dogs, horses, and people! At home we’re working on basic manners and socializing like crazy. She’s a firecracker who greets every new experience with enthusiasm, which is so much fun to work with. 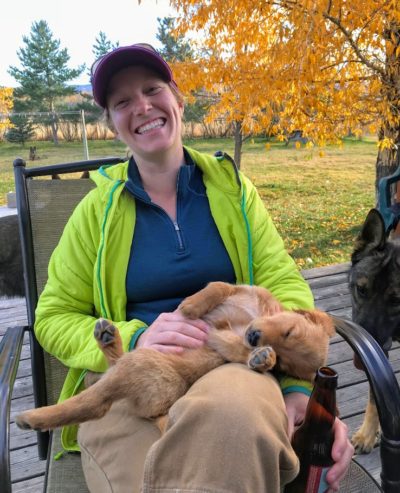 Rally and I at the conclusion of her first day of training. She was exhausted!! 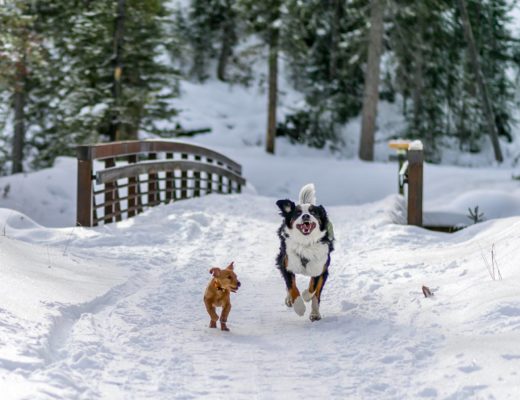